Jewellery is a significant part of an Indian bridal trousseau, and every piece holds its own importance for the bride. But, the one that rests on the crown area is inestimable. Not only does a maang teeka get noticed by one and all fairly quickly, but it even adds a royal appeal to your overall look. However, one has got to be quite wise while picking the maang teeka, as the wrong choice can ruin your entire efforts.

Well, here are some ethereal choices for maang teekas worn by the following Bollywood actresses at their real-life weddings. Hope, they will be able to help you decide the right maang teeka for your wedding day.

From Pearl And Kundan Design To Simple Diamond Ones, Unique Haath Phool Designs For Brides

Recommended Read: 7 Most Amazing Types of Indian Wedding Jewellery That Every Bride-To-Be Must Know 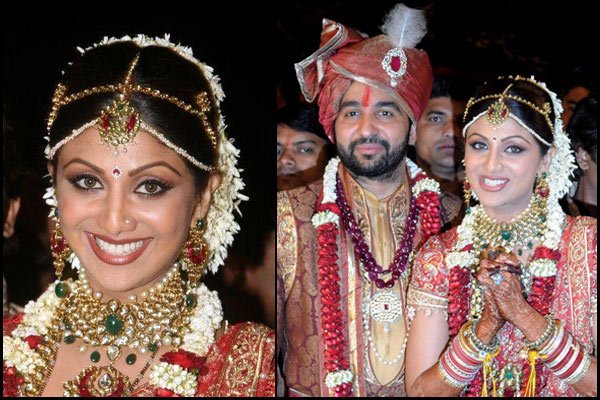 Shilpa Shetty gave onlookers a glimpse of the enormous rock which her fiance Raj Kundra gave her to officiate their relationship. So, when it was her wedding, her fans and the wedding guests were bound to expect some over-the-top bridal jewellery as well. And, she did not disappoint anyone at all. The maang teeka she wore was in gold with two chains, giving an authentic South Indian touch. The centrepiece had rubies and emeralds embedded in it to complement the wedding dress. 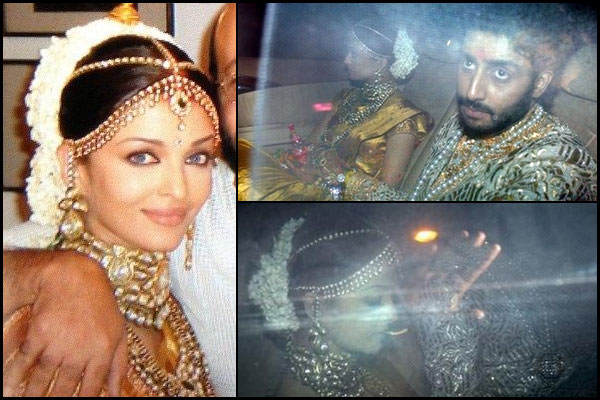 In a Kanjeevaram saree, Aishwarya made one of the most beautiful brides that Bollywood has ever seen. Her kundan jewellery was in pure gold. Her maang teeka had a three chain matha patti, and ran down till the start of her long tear-drop diamond danglers. The centrepiece had an emerald embedded in it. 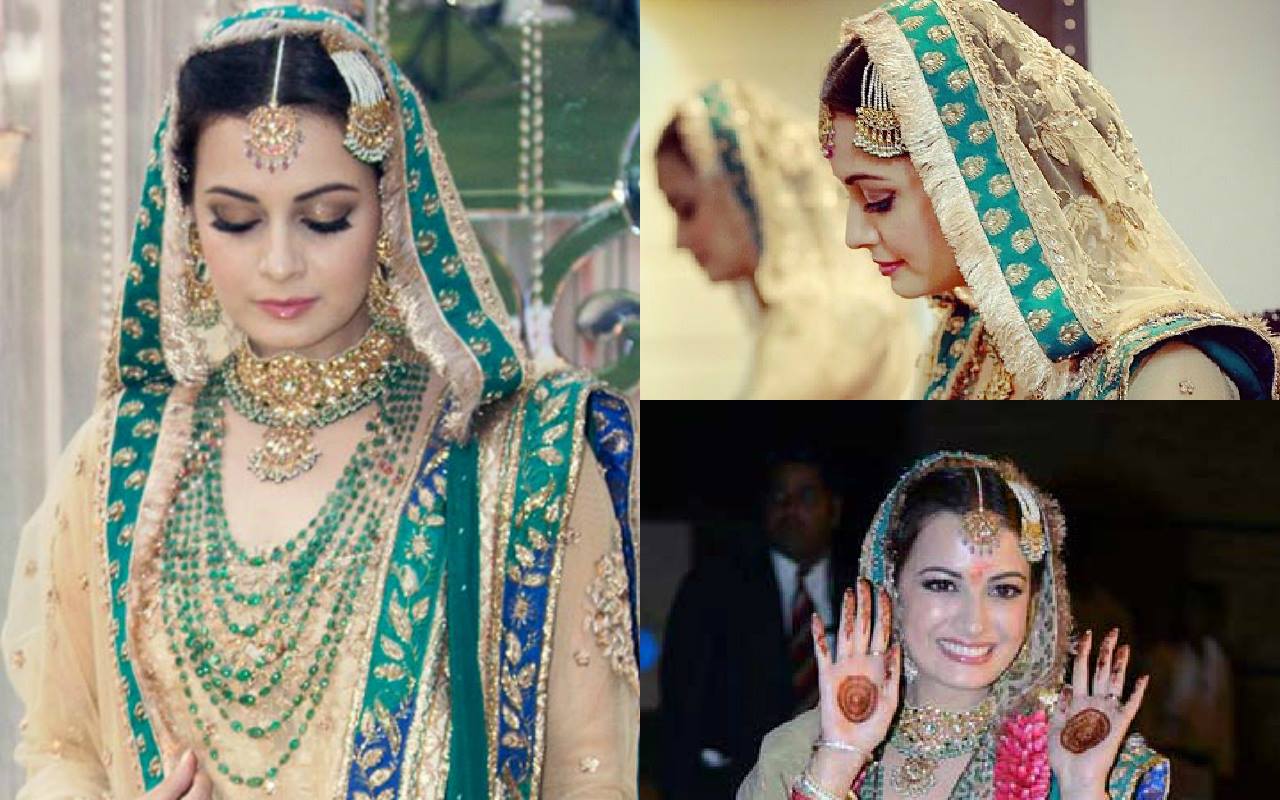 This actress's dressing sense has always been simple and beautiful. And, this motto of hers was completely visible in the choice of her maang teeka at her wedding. She wore simple gold maang teeka with a pearl string. The teeka had ruby drops attached to it. She also wore a jhoomar in pearl, gold and emerald. It is the perfect choice for any bride who wants to keep her look understated yet, beautiful.

Must Read: 10 Trendy Ideas To Pair Up Jewellery With Bridal Lehenga; Colour Contrast It With The Wedding Outfit 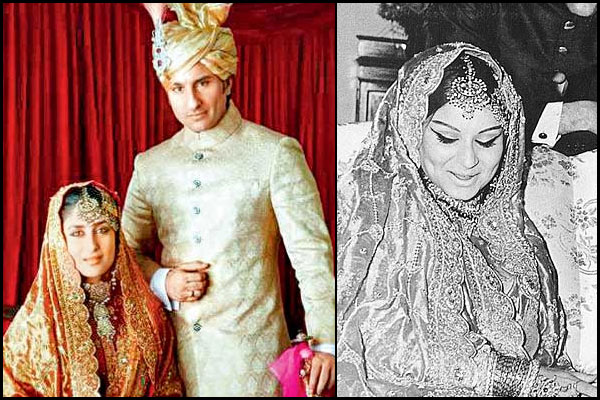 Kareena Kapoor got married to the chote Nawab of Pataudi, Saif Ali Khan, in her mother-in-law's (Sharmila Tagore's) bridal dress, an orange sharara. Apart from donning the attire, Kareena also wore the royal maang teeka (just as her mother-in-law) and a jhoomar. It was a big piece of jewellery in gold and kundan, with a touch of green in it. Any bride who wants to look like a true queen should go for this. 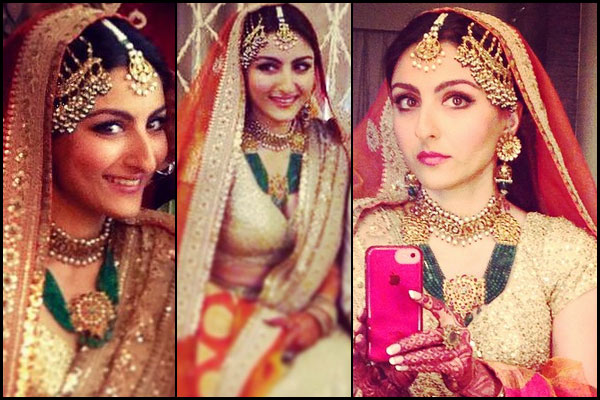 Soha Ali Khan married her long-time beau, Kunal Kemmu in an elegant pearl, light gold and orange coloured lehenga. To match her shimmery outfit, she chose a necklace made of pearl strings with a gold centrepiece. The string had beads in green to add some colour to it. She paired a matching maang teeka with a jhoomar in gold and pearl. Her soft and peachy wedding look was loved by many. Her whole jewellery look, including her maang teeka, was in kundan and white pearl. Her maang teeka was attached with matha patti and the centrepiece had a pearl drop attached to it. 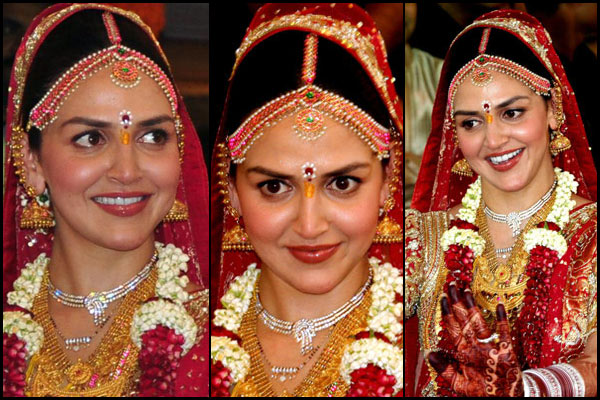 Esha Deol looked like a dream girl on her big day. She wore proper temple jewellery in gold to match her gorgeous attire, but her maang teeka clearly stole the limelight. It was a delicate piece, intricately designed keeping in mind the colours of the wedding dress. It had small pearls, ruby and emeralds in it along with a matha patti. If you want to wear gold jewellery but, still want to add colours to it, then this design can be a great option. 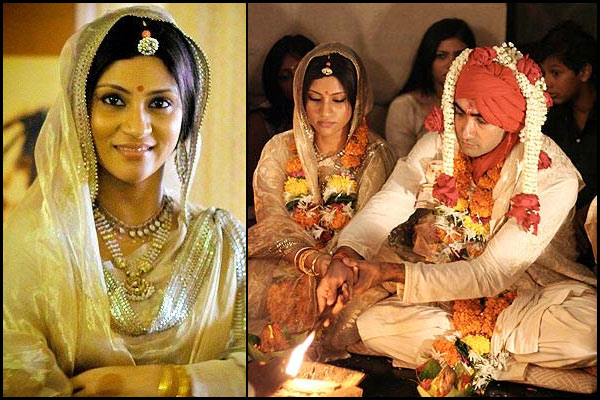 Like the unique and challenging roles in her career, this stunning Bengali beauty's choice for her wedding ensemble too was an exceptional one. She ditched the typical red and similar shades for her bridal lehenga and went for ivory. She wore her grandmother's jewellery which had a borla styled maang teeka. It was simple, but the best choice for her face. Round faced brides should opt for a similar piece. 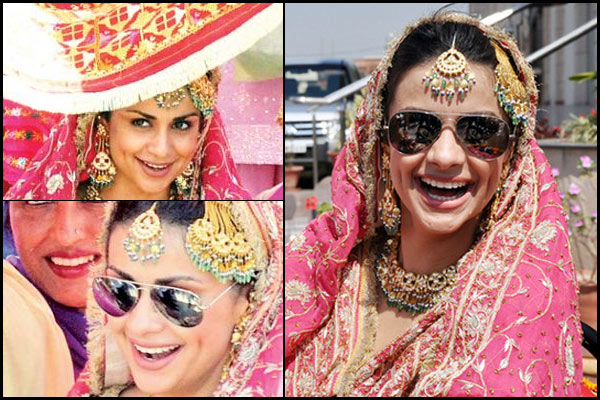 This hatke strong lady looked every inch of a sassy doll on her wedding day. If the sunglasses were not enough, look at the choice of her maang teeka. A classy choice, we say. Her attire was well complemented with the contrasting green maang teeka and a jhoomar. The maang teeka was in gold, with rubies in the centrepiece, and pearls and emeralds as drops. If you are just as daring as she is, go for this look.

Must Read: Jewellery Essentials For Hands And Arms That Give Bride A Princess Look On Her Wedding Functions Ayesha Takia made a very modern bride. Her jewellery was entirely in diamonds. Her maang teeka was simple and chic, which was again in diamonds. If you are not so much into gold then, this modern look can work in your favour. 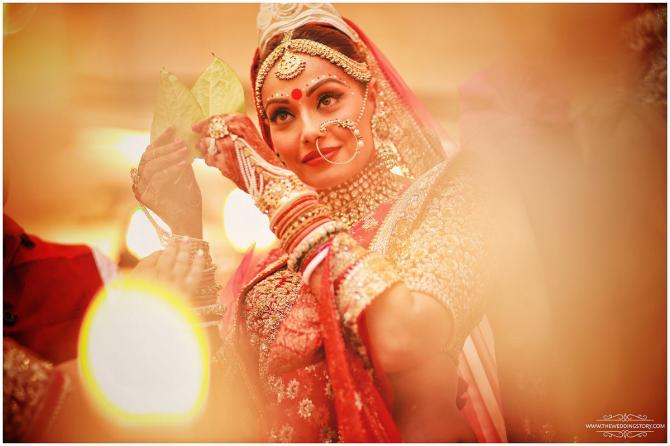 One of the hot and sizzling actresses of the B-town, Bipasha Basu broke millions of hearts when she announced her wedding. Bips (as she is lovingly called) walked down the aisle with her Alone co-star, Karan Singh Grover on April 30, 2016, and it was a big fat Bengali wedding. As unique and majestic as it could get, Bipasha wore stunning jewellery and even more stunning was her exquisite matha patti. Bipasha looked like a perfect Bong bride in her red-coloured Sabyasachi lehenga along with green and kundan jewellery.

Also Check: 9 Stunning Passa Designs That All Brides-To-Be Can Opt For Their Wedding Day 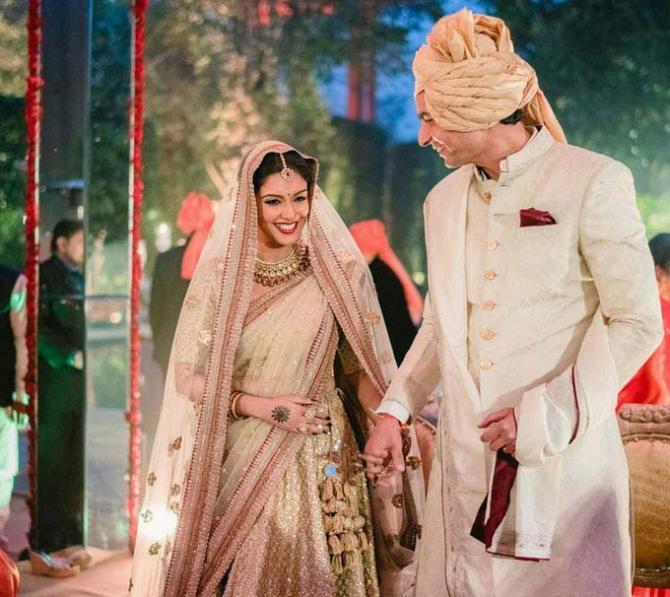 Held at Dusit Devarana hotel in Delhi, Bollywood actress Asin Thottumkal got married to Micromax CEO Rahul Sharma in twin private wedding ceremonies on January 19, 2016. They had both - white wedding, as well as, Hindu wedding. Asin looked resplendent in a golden lehenga by Sabyasachi Mukherjee for the Hindu wedding. She chose to be very elegant and decent when it came to her jewellery and wore a maang teeka that added to her bridal charm. 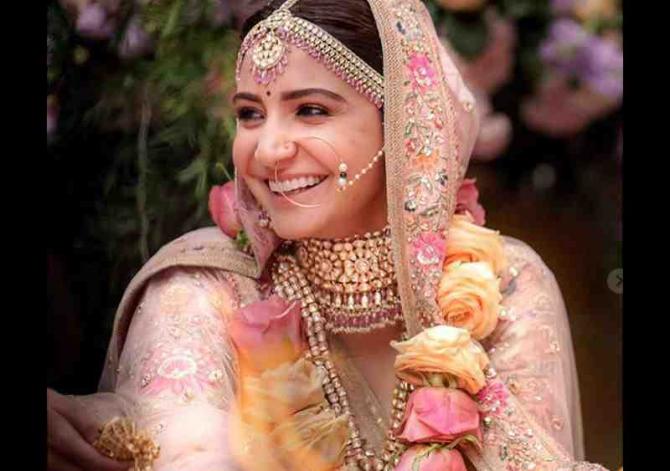 The chirpy, vivacious and beautiful actress of the Indian film fraternity, Anushka Sharma, walked down the aisle with cricketer, Virat Kohli in a secret ceremony. They took the wedding vows on December 11, 2017, in Tuscany, Italy. Anushka looked like a dream in her bridal attire. The icing on the cake was her stunning matha patti. She chose to wear kundan jewellery with pink hangings complementing the colour of her lehenga. 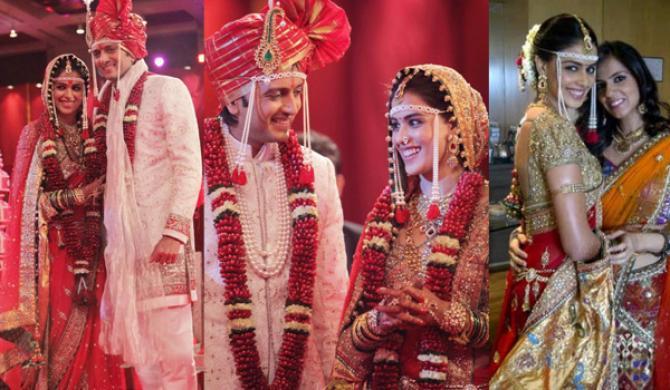 One of the cutest couples from tinsel town, Genelia D’Souza and Riteish Deshmukh became mister and missus on February 3, 2012. These lovebirds had a proper Maharashtrian style wedding, following each and every custom and rituals. Genelia wore a beautiful red and golden saree designed by ace designer Neeta Lulla. Along with the traditional Maharashtrian jewellery, Genelia adorned herself in an elegant maang teeka and didn’t go for much. 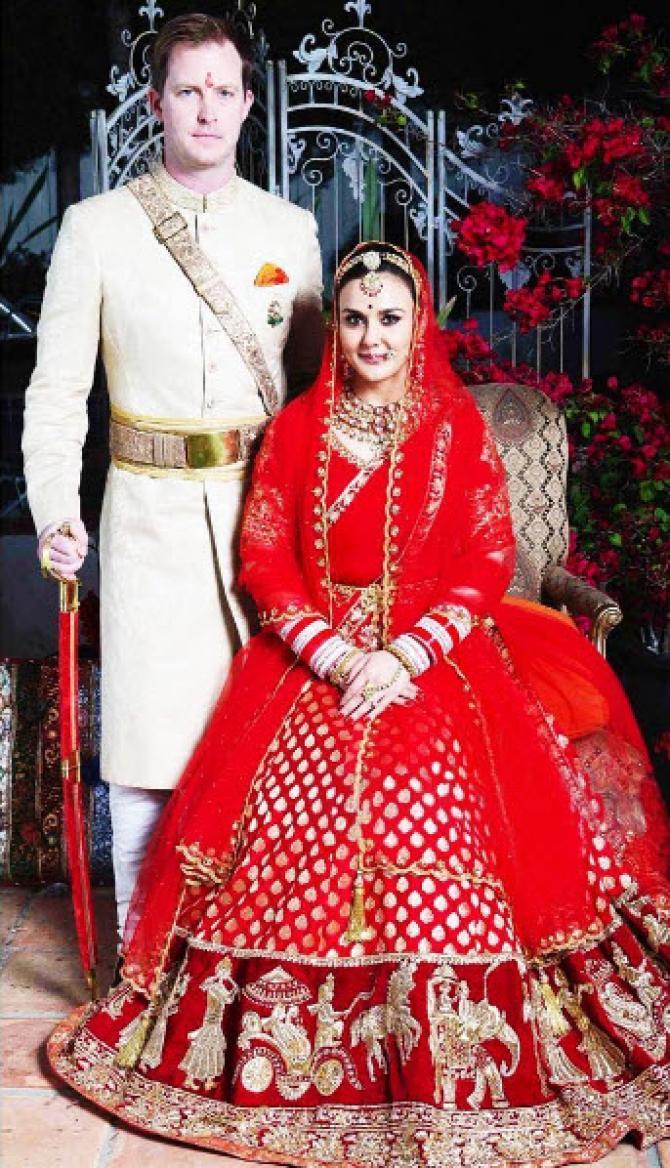 Bollywood darling dimpled beauty, Preity Zinta surprised everyone with her wedding news. She took the wedding vows with her long-time boyfriend, Gene Goodenough on March 1, 2016. Their wedding was totally an intimate affair with only family members and a few friends in attendance. Preity looked like a queen in her red-coloured lehenga that had traditional gold embroidery. Also, her beautiful matha patti stole all the limelight as it added to her overall bridal look.

We have given you many options that can make your wedding attire a top-notch. So, go ahead and take your pick!