The Bengali bride, who is a jet-setting creative producer by profession had a lavish wedding in Hyderabad. The decor and the outfits were worth taking notes from.

Though a wedding is a one-day affair, the preparations for it go on for months. Not just the D-Day, but preparing for the pre-wedding and post-wedding festivities also requires a lot of planning. But when you are lucky enough to get a planner, who designs your wedding decor just like you wanted, then it's a blessing in disguise. Not just the decor and the food, but the wedding outfits, jewellery and makeup have to be ek se badkar ek, so that people remember it for days.

If a bride marries a person, who belongs to a completely different culture, that calls for a wedding with a reflection of the multitude of traditions that are quite different from each other. Not just that, it also means that she and her would-be groom embrace each other's cultures and wear a host of outfits that represent their tradition. Moreover, no matter how busy her work schedule is or much modern she gets, a bride never forgets to stick to her roots at her wedding.

Bride Donned A Unique Fish-Cut Lehenga From Designer, Tarun Tahiliani, Styled It With A Veil The bride, Shona Chakravarti had got married to her army captain beau, Ankur Gupta, at Taj Krishna, Hyderabad. The two had crossed paths on Tinder, and there was no looking back since then. For the couple’s Hindu Vedic Wedding, the best parts of all the different cultures and customs their families represented were incorporated by their wedding planner, Minttu Sarna. For her D-Day, Shona had opted for a sea green lehenga and had paired it with a red dupatta and with a shimmery copper-hued blouse. Her outfit was encrusted with intricate embroidery work which was from the shelves of the ace-designer, Tarun Tahiliani. 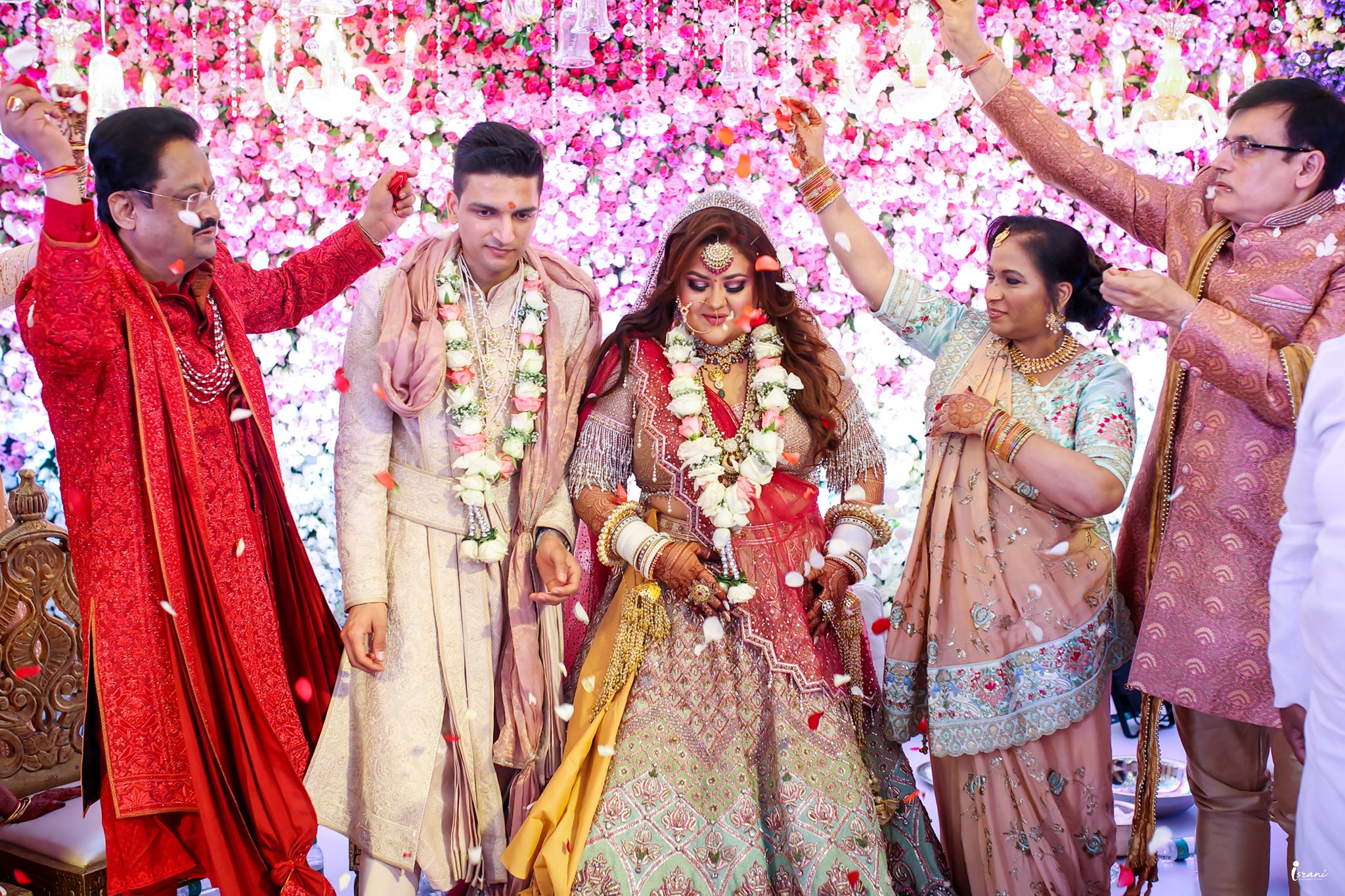 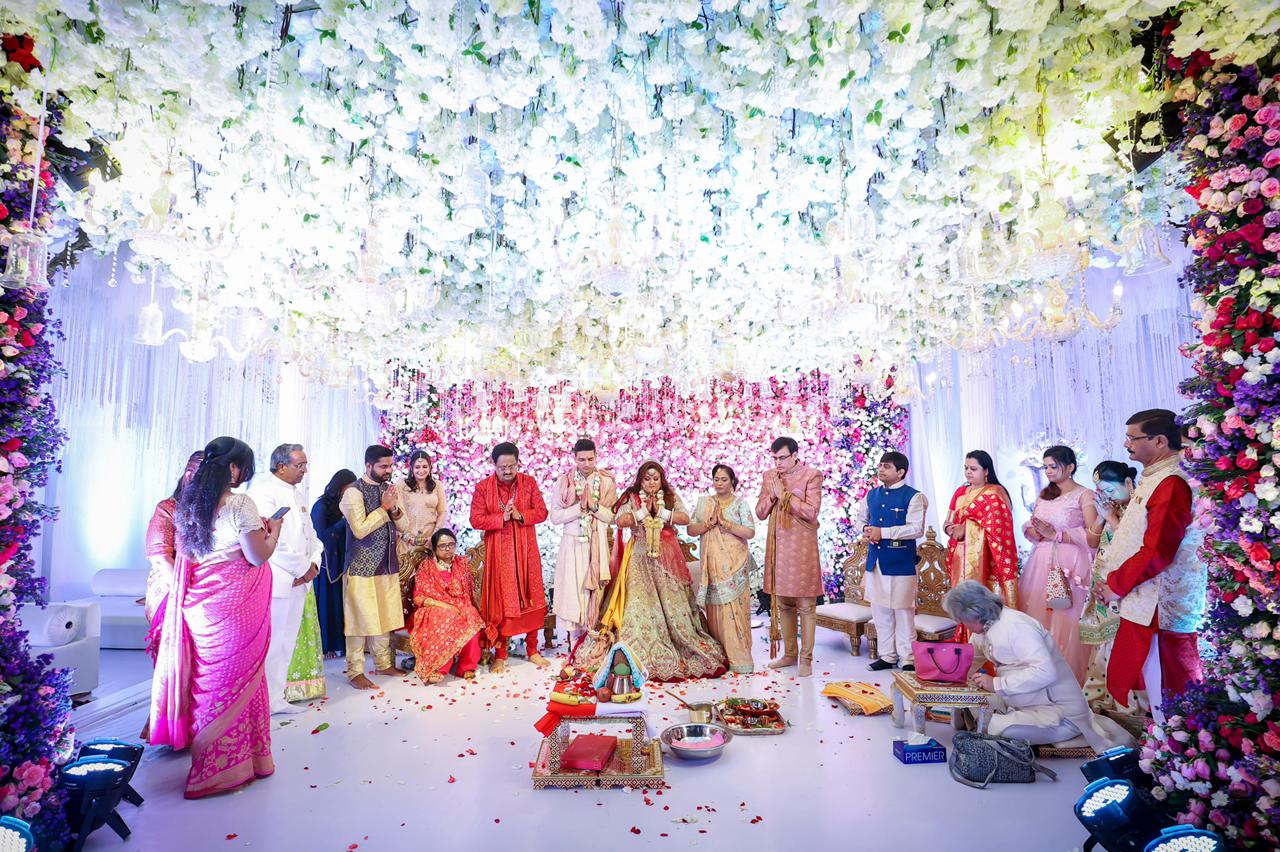 Shona had completed her look with a heavy choker, a long neckpiece, matching earrings, white chooda, maang teeka and nath. For the makeup, she had chosen a pink eyeshadow, blush and a nude shade lipstick and had kept her tresses open in soft curls. On the other hand, her husband, Ankur Gupta had worn an ivory sherwani and had paired it with a motihaar. While the outfits were worth stealing the show, the decadent elements such as chandeliers, lamps, crystal props and floral arrangements added to the ethereal feel of the occasion. Shades of pink, purple and white had ruled the decor, and the mandap had exuded sheer grandeur with a stunning backdrop of pink tonal blooms and a whimsical white canopy. Shona was a Bengali bride, and for her wedding, she had celebrated both her Bengali and North Indian heritage with a fusion haldi and chooda ceremony. For the haldi ceremony, we could see all the women of the family dressed in the customary laal paar shada saree, which is a Bengali drape of white sarees with a red border, while the men wore a dhoti and kurta. The then-bride-to-be had looked surreal in her red saree, which was worn in aath-poure style. On the other hand, Ankur had complemented her in an off-white dhuti-panjabi, which is worn by Bengali grooms on the day of the wedding. Shona had also flaunted her mukut and owing to her Bengali roots, Ankur had worn a topor. For those who don't know, a mukut and a topor are the head-gears worn by a Bengali bride and groom on their D-Day. A vibrant yellow decor contrasted the dress code beautifully. The duo was welcomed by showering petals on their entry and the dholwalas had amped up the energy of the event. The Bengali-style, haldi ceremony was followed by the North Indian ceremonies of chooda and kaleere.

Suggested Read: Bride Ditched The Designer Lehenga And Re-Wore Her Mother's Wedding Saree For Her Own 'Shaadi' The glamorous sangeet was imbibed with the feel of a nightclub, with edgy jewel-toned decor, massive LED screens, neon signs and animated graphics of crystal and flowers. While the then-bride-to-be had worn an ivory lehenga from the fashion designer, Seema Gujral, her then-would-be groom had donned a white shirt with a black tuxedo. 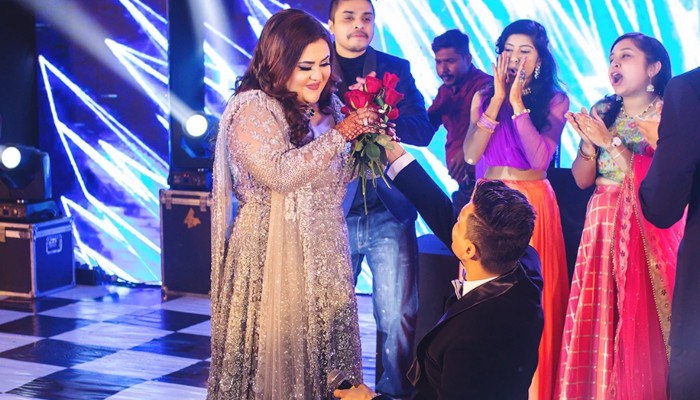 With subtle makeup, nude lipstick and pink eyeshadow, soft curled hair, Shona had opted for minimal diamond jewellery. The night had seen some of the amazing performances by the duo and their loved ones. And was followed by a surprise proposal from Ankur, which is a dream of every girl. The decorations and the ambience for the vibrant mehendi had exuded bright Rajasthani influences with a dash of aesthetic vintage elements for a fresh, fun vibe. The couple had made a grand entry amidst colourful smoke bombs as their friends had cheered for them. For the mehendi ceremony, Shona had adorned a red coloured lehenga and had paired it with an aqua green blouse and a yellow dupatta. 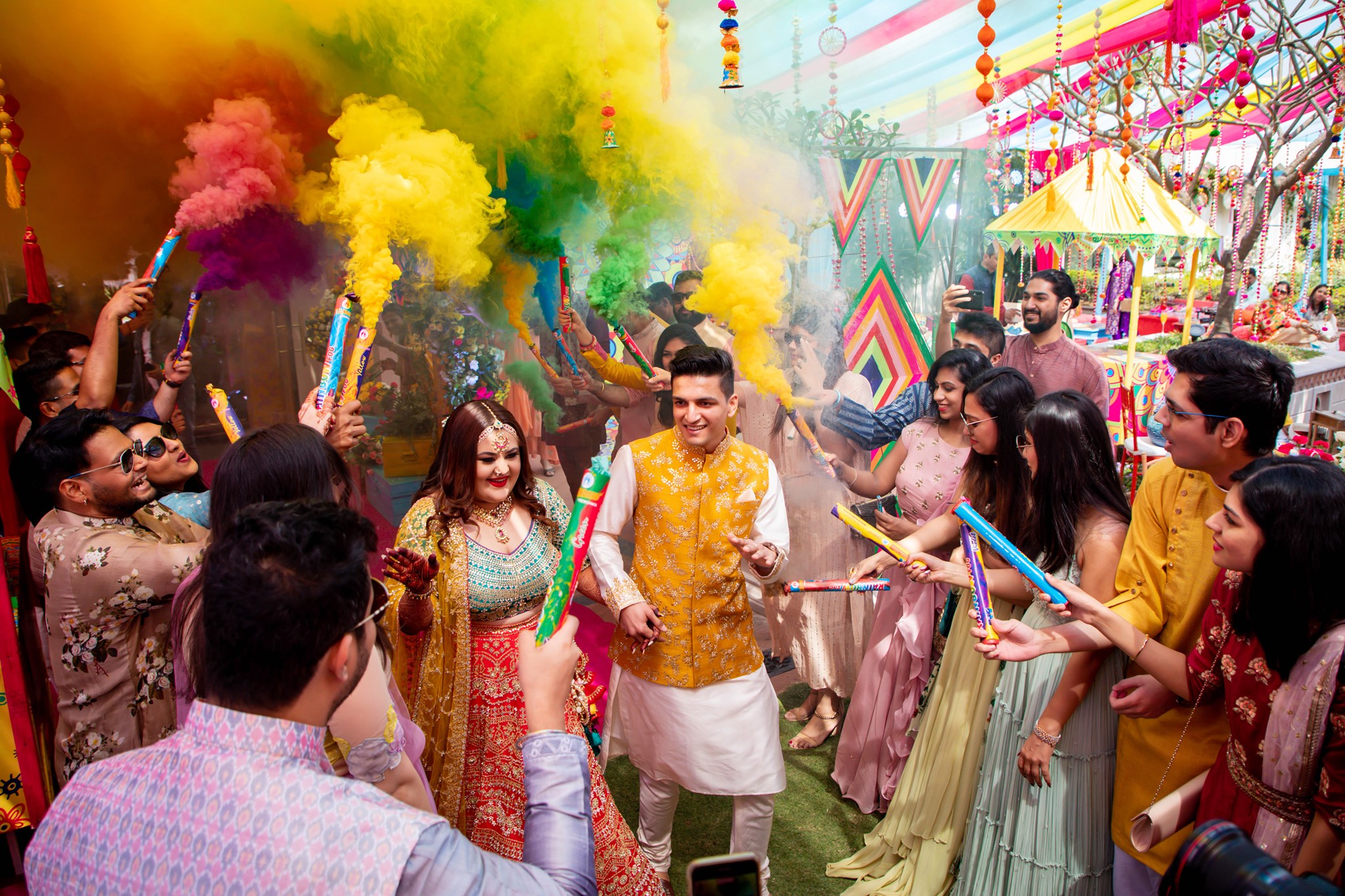 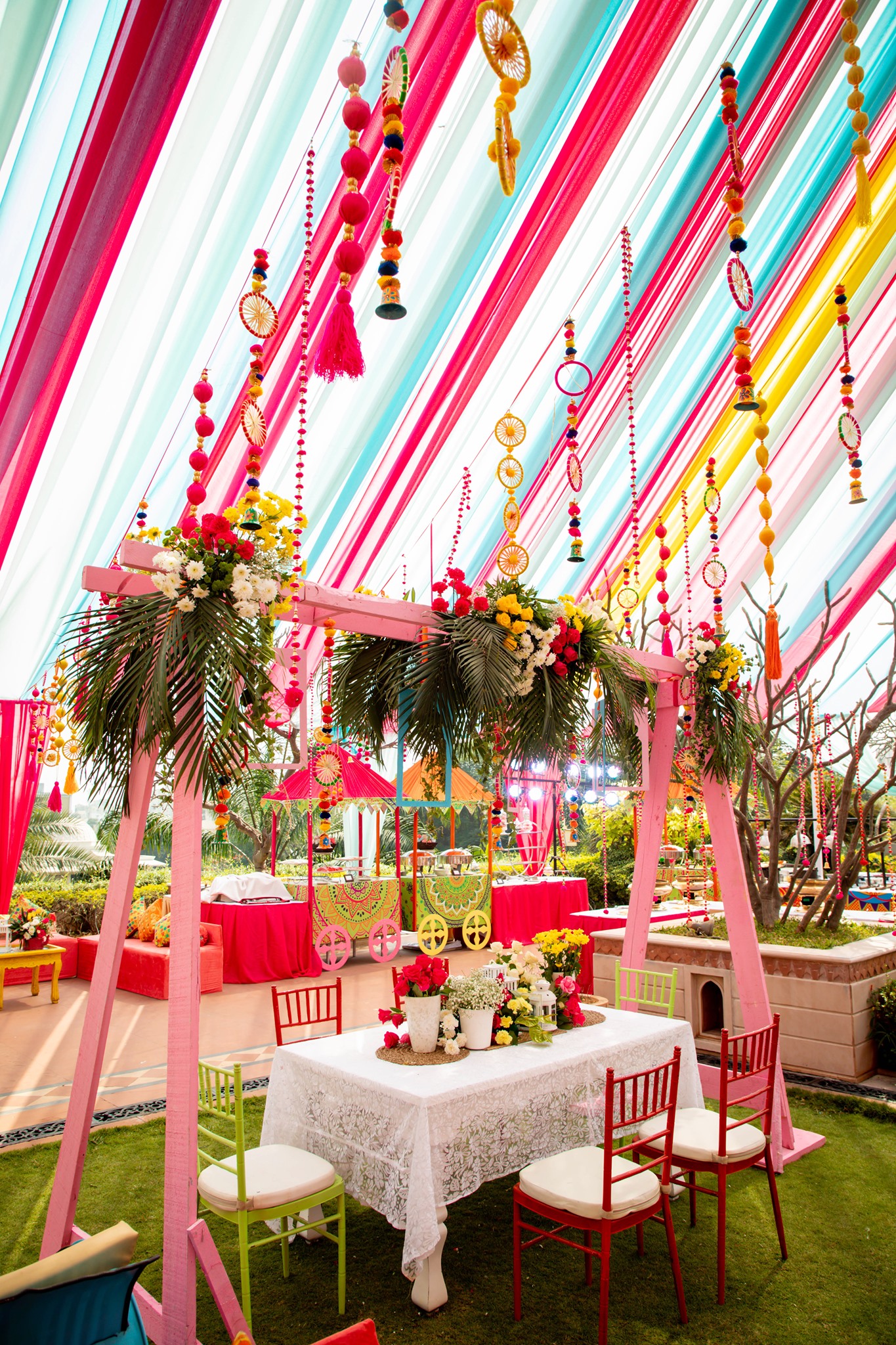 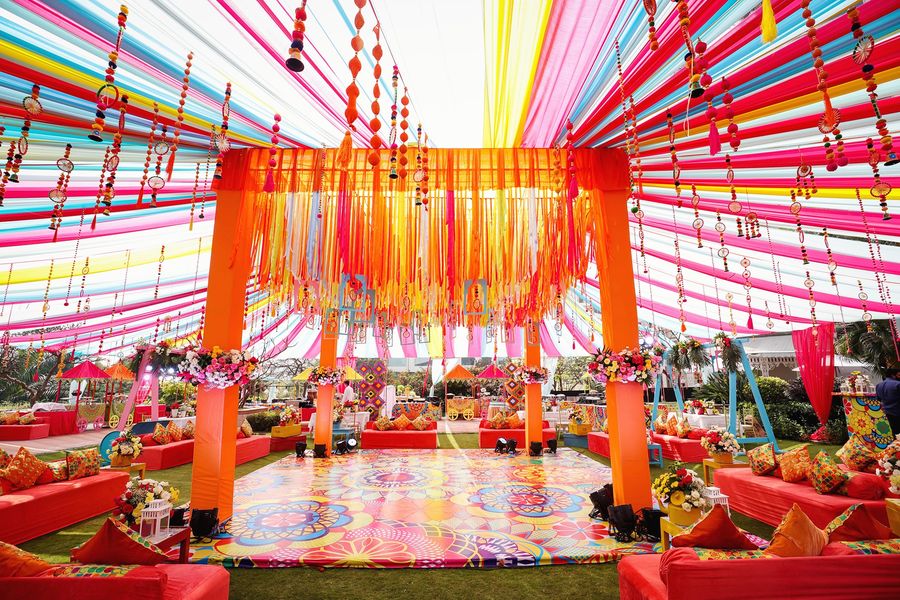 To round off her look, she had opted for a heavy necklace and a matha patti. She left her hair open, and the bold red lipstick did all the talking. Her prince charming had looked dapper in an off white kurta-pyjama set and had styled it with a mustard yellow badhgala jacket.

Well, a wedding like this which inculcates the traditions of multiple cultures and that too with such exquisite decors is a sight to behold. Besides that, the bride stole the show in all her outfits. Which one did you like the most? Let us know!

Bride Donned A Unique Fish-Cut Lehenga From Designer, Tarun Tahiliani, Styled It With A Veil