When you hear the words ‘bride’ and ‘vidaai’, what are the thoughts that come to your mind? Tumults of crying, family members agonise over parting away with their daughter as well as shed happy tears as she embarks her new journey, wedding rituals, smudged makeup and a promise made by the groom that this should be the last time that his now wife is crying? Vidaai ceremony all over the world, comes with its own set of rituals but the actions and repercussions are same in one and all. (Do Read: Emotional Moments Shared Between A Father And His Daughter On Her Wedding Will Leave You Teary-Eyed)

The world is changing at a rapid rate, with technology being at the forefront for everything. All thanks to technology and social media, that getting access to information and coming across some heart-warming videos have become a part of our daily routine now. Amongst the ‘viral video’ trend that is upsurging the internet, a recent video during the vidaai of a Bengali bride is winning hearts on the internet. Want to know more? Read on!

This Groom Broke His Leg At Bachelor Party, Bride's Lovely Gesture On Wedding Stole Our Heart 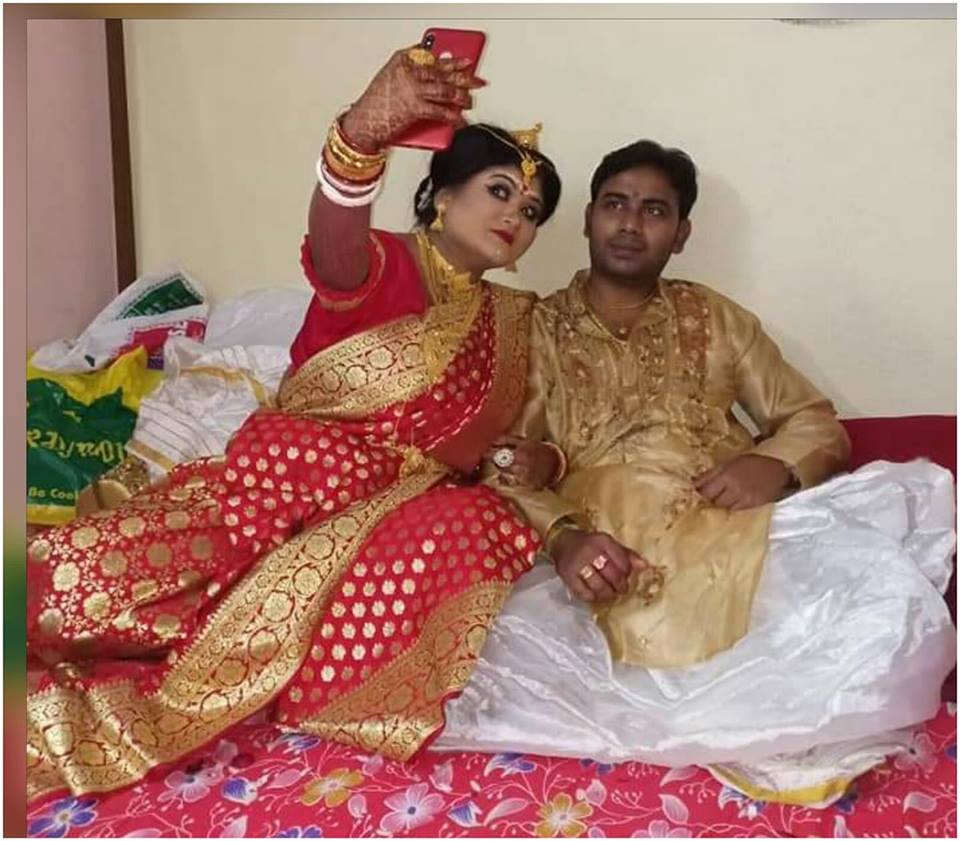 Remember when we earlier shared with you that vidaai comes hand-in-hand with crying? This video banishes all such things! A Bengali bride, during a ritual called ‘Kanakanjali’, wherein, she is supposed to throw rice from the back at her parents while leaving for her in-laws’ house, gives an epic reply when a relative present there, tells her that today you have repayed all your parent’s debt (through this ritual), to which she confidently blurts out, “You can never repay parent’s debt!” In the later part of the video, you will see that the super-confident Bengali bride also revokes someone when they say that she will cry at her wedding! It is very rare to see brides as these and while leaving her parent’s home, she is seen saying a happy ‘goodbye’ to everyone and further told everyone that, "This is my parent’s house, I will come whenever.” When one of her relatives said, “Do come during Kali puja”, she replied, “I will come in the next 9 days!” Such a bang-on bride this lady from Begampur, West Bengal is!

Isn’t it amazing? Bengali weddings are one of the most fun, subtle weddings with even more amazing wedding rituals. It all begins with the aashirbaad ceremony, wherein the bride and the groom are given gold ornaments and clothes, symbolising that the wedding has been finalised. This usually happens a few days before the wedding. And what follows next is the ai buro bhaat, wherein the bride and the groom (individually or together) are invited for lunches and dinners marking their last few meals as bachelors. (Must Read: Bride Colour-Coordinated Her Outfits With The Dog Who Was Also Her Best Man At Goa Wedding) On the start of dawn, the wedding rituals of a Bengali couple begins with dodhi mongol, which is held at bride and groom’s respective places. Later, in the morning of the wedding day, elders of the family (generally father or uncle), perform the vridhi puja, wherein, prayers to the ancestors are made. This is followed by the ladies of the house going to a nearby water source and bringing a pot of water, with which the bride-to-be and the groom-to-be takes shower at their individual places. Before which, there is the holud kota ceremony, wherein, all the ladies of the house crush raw turmeric and apply some to the bride and groom. Some families also have a tradition, wherein the leftover haldi from the groom is brought from his house, which is later on, applied on the bride. The sakha-pola ceremony differs from family to family. While some families make the bride-to-be wear a white bangle (sakha) and a red bangle (pola) each on both hands, a day prior to the wedding day, some familes have this ritual right after the holud-kota ceremony. The bride and the groom usually fasts for their wedding and the evening is meant for the main wedding rituals. Dressed in traditional Bengali wears, with thermocol mukut, chandan decorated on her forehead, nath, red bindi, benarasi saree for the bride and a dhoti-kurta-topor for the groom, brides enter in a piri (seating slab), which is carried by her brothers, with elders doing ‘ulu dhwani’ in the background which is said to drive away all evil spirits. The bride covers her face with paan patta (betel leaf) and removes it during the shubho drishti, when the bride and groom sees each other for the first time as a married couple. This is followed by the wedding vows, saat paak, kanyadaan and kanakanjali, post which the bride bids a ‘not teary anymore’ adieu to her parents and welcomes her new home! (Also Read: Cool Bride Wore Sneakers Below Her 'Lehenga' And Entered In 'Pholoon Ki Doli', Creating New Trend) 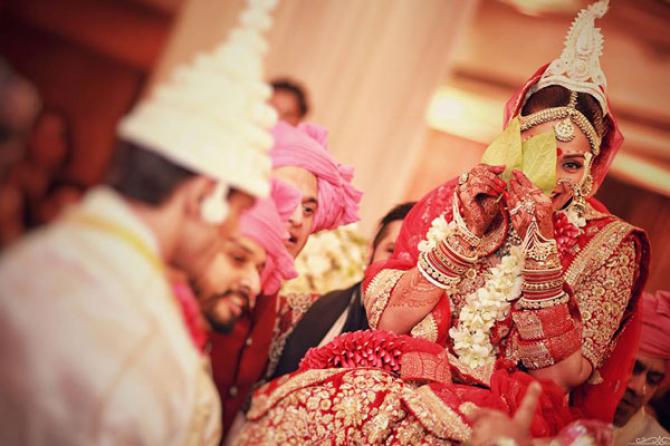