'Baa Bahu Aur Baby' actress, Benaf Dadachandji had recently become a proud mother. On February 14, 2020, she shared the first pictures of her daughter. 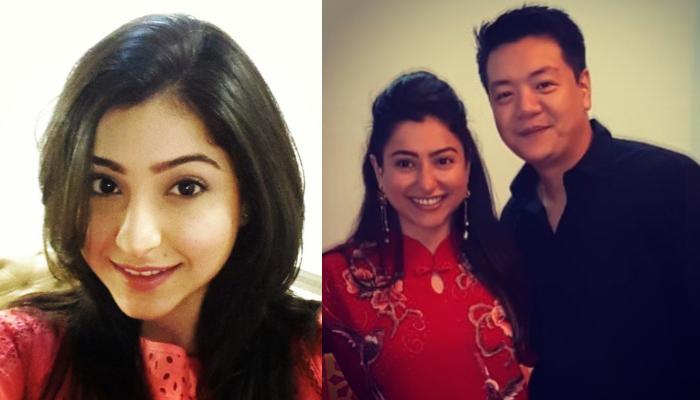 This year’s Valentine’s Day bought a lot of adorable pictures and beautiful videos from the glamour world. We saw a lot of celebrities buying cakes, gifts, and doing something special for their partners. However, there’s one adorable couple who had a completely different Valentine’s Day this time around. We are talking about the Baa Bahu Aur Baby actress, Benaf Dadachandji, who celebrated this year’s Valentine’s Day with her family and also shared some pictures of her newborn baby on her Instagram handle for the first time. (Recommended Read: Sameera Reddy Puts On Her 'Mommy Swag' As She Grooves With Her Little Munchkins, Hans And Nyra)

Well, it seems like yesterday when on February 10, 2019, Benaf Dadachandji had gotten married to her long-time fiancé, Norman Lou. Benaf sported a boat-neck white gown, veil tied to her bun and minimum jewellery. Norman, on the other hand donned a black tuxedo with a bow tie. Do you know what was the best part? Sharing a picture from their do, the Bobby Jasoos star had written, “Memory for a lifetime... thank u, everyone, for making it so special for us. u husband hou.” Check out an adorable picture from their wedding day.

Isn’t both Benaf and her husband, Norman Lou is looking stunning? Well, on February 13, 2020, when the whole world was celebrating Valentine’s Day with their partners. Both Benaf and Norman were spending time with their family and their newborn baby. Benaf took on Instagram and shared some pictures of her baby. The actress posted two pictures and captioned the first one as ‘My Valentines’ and the second one with a red heart. Take a look at the pictures below. (Also Read: Akshay Kumar Asks For Suggestions To Take Revenge After Twinkle Khanna Changed His iPad's Password)

Benaf had invited some of her friends to her house to celebrate the day of love together and some of her notable guests included her co-star, Rubina Dilaik from the show, Chooti Bahu, and her husband, Abhinav Shukla, Srishty Rode, and many others. Rubina was the one, who shared a lot of pictures and video with Benaf’s baby on her Instagram handle. Have a look at the adorable pictures and funny video below.

Both Benaf and Norman are having one of the best times of their lives. However, not a lot of people knows this but Norman and Benaf had been in a relationship of 9 years before getting married. In an interview with TellyChakkar, Benaf had spoken about the wedding with her 9-year-old love, Norman. Speaking about the same, she stated, “After a courtship of 9 years, we finally decided to get married, and it is a wonderful feeling. 9 years just flew by and am looking forward to many more.”

Known faces from the telly world and close friends of Benaf, Rubina Dilaik, hubby, Abhinav Shukla, Srishty Rhode, Sharad Kelkar and wife, Keerti Kelkar, had attended the wedding bash of Benaf and Norman and looked equally mesmerising. Rubina took to her INstagram handle and had shared a couple of pictures, one particular caption that caught our fancy was when Rubina wrote, “Welcome @benafd @chef_in_black_shorts to the “Wedded -Bliss “ Club.” Here are a few pictures from the Benaf-Norman ki shaadi.

However, it wasn’t easy for Benaf in terms of making a name of herself in the entertainment industry. In 2012, TellyChakkar had published a page from Benaf’s diary, which contained details about her acting spree, work, struggle in Mumbai. The same could be read as, Well, when I was four years old, I did my first advertisement for ‘Vicks Ki Goli’. In all, I have done around 30 to 40 advertisements to date. Later in 1995, I appeared on a big screen in the film Halo as Shasha. For that performance, I was honoured with the Special Jury Award at the 43rd National Film Awards and also in the ‘Best Artist’ category at the Children's Filmfest. In 1998, I appeared in one more film China Gate as Lali. After films, I tried my hands in the television industry. And I have played end number of roles in varied categories. My first TV series was Nazarana and later I did Hello Dolly for Star Plus.” So, it’s easy to suspect that Benaf had achieved it right from scratch and is still working hard. We hope Benaf achieves more success and also happiness in her personal life. (Don't Miss: Neeti Mohan And Nihaar Pandya Share A Song, 'Prem Sagar Mein Neeti Aur Nihaar' On First Anniversary)