Ayushmann Khurrana and his brother, Aparshakti Khurana wished their mother on her birthday in the most adorable way possible. Check out the picture inside! 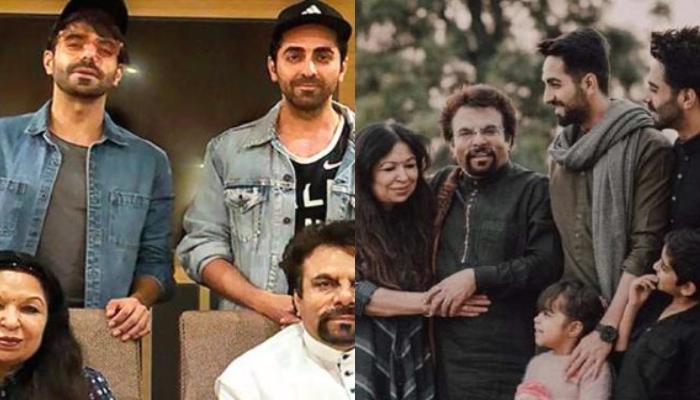 Bollywood's sone munde, Ayushmann Khurrana and his brother, Aparshakti Khurana wished their mother on her birthday in the most adorable way possible, and we can't stop drooling over the sweet picture they shared with her. Check out Khurrana brothers' birthday wish for their dear mommy below! (Recommended Read: Smriti Khanna's Baby Girl, Anayka Found Her Favourite 'Toy' To Play And It's So Cute [Video Inside])

One of the finest actors of our generation, Ayushmann Khurrana, shares a great rapport with his mother and father. Did you know that it was Ayushmann's father who had pushed him to pursue his passion? The actor had revealed it in an interview with the Hindustan Times and had said, "I remember, straight out of college, my father was the one who pushed me. I was very laidback, but he was very ambitious for me. He packed my bags and booked my tickets. I was thrown out, and he said, 'Jao actor banne jao, bahut ho gaya. Chandigarh main dera dalke baitha hai'." 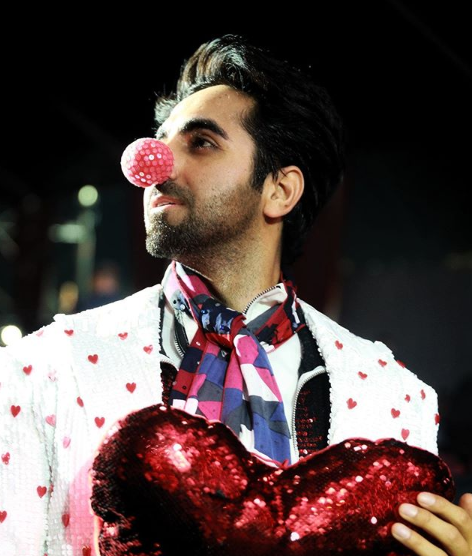 On the occasion of their mother's birthday, the doting sons, Ayushmann and Aparshakti took to their social media handles and shared an adorable picture with their mommy, and it's so sweet, it'll put a smile on your face. The picture sees Ayushmann and Aparshakti kissing their mother on her forehead while she's standing between them. While Ayushmann captioned the picture as "Happy birthday Ma" followed by a red-heart emoji, Aparshakti wrote, "Happy Bday Mummmmmma" followed by a red heart emoji. Check out the picture below: Some days ago, a fun video of the Khurrana brothers, Ayushmann and Aparshakti had taken the internet by storm. On July 5, 2020, Aparshakti had taken to his Instagram handle and had posted an adorable video of his fun time with bhai, Ayushmann. His bhabhi, Tahira Kashyap had recorded it. In the video, we could see the brother duo, playing the popular game 'aao milo' with a cute twist and the excitement on their faces had made us remember our childhood. Alongside the video, he had written, "If Aao Milo Shilo Shaalo was one of the categories of Olympic Games. Innn 2 ladkon ka medal pakka tha. PS- some people call it Aao Milo Shilo Shaalo in bachpan but we always called it Aam Lelo Selam Saali."

Ayushmann Khurrana is a great son, who deeply admires his mom and dad and never shies away to express the same. On May 18, 2020, Ayushmann Khurrana had shared a heartfelt birthday wish for his dad, P. Khurrana, with a stunning picture of him. The actor had written a heartfelt note in which he had given credit to his father for giving him the freedom to pursue his dream of becoming an actor. His note could be read as "Happy bday to the world's best father! You gave me the wings, talent and ambition. I won't tell your age to the world. Coz they won't believe it. Jai jai (that's what we say when we do charan sparsh)." The actor had also posted a picture of his dad in ethnic attire on his IG stories with a funny remark on his age. He had written, "Happy bday papa. Finally, you're 25! Yes, that's your real age" atop it. (Also Read: Neha Dhupia Posts Video Of Mehr Sucking Thumb While Sleeping With Dad, Angad Bedi On Instagram Reels) 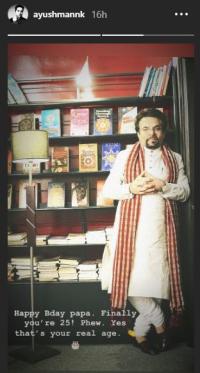 In an interview with the Hindustan Times, Ayushmann had shared an incident from his childhood reflecting on the way he has gained wisdom from his father over the years. He had shared, "My father probably knew that the sooner you start your pursuit, the better for you. When I was six, I was at a birthday party and told my dad, 'Papa mujhe gana gana hai'. He replied, 'tumhe koi sunega nahi'. There were four people and I told him that I want to sing for them. He said, 'No, you aren't ready for it'. I couldn't understand it then, but later, he told me that when the time is right and you are ready to leap, only then should you do it. It has been that simple." (You May Also Like: Jaaved Jaaferi Leaves For Father, Veteran Actor, Jagdeep's Funeral, Who Passed Away At The Age Of 81)

Here's wishing a delighted birthday to Ayushmann and Aparshakti's mother!