Cutest Proposal Ever: Author Durjoy Datta Proposed To His Girlfriend Avantika For Marriage

Cutest Proposal Ever: Author Durjoy Datta Proposed To His Girlfriend Avantika For Marriage

Durjoy Datta, India’s bestselling author, better known for his dimpled smile, cute looks and romantic novels is making us fall for him. We are crushing on this cutie and wondering when are we going to get a proposal this beautiful and romantic!

Recommended Read: A Parsi Boy Fell In Love With His Schoolmate And Had The Most Magical Wedding 10 Years Later

Well, this boy has taken romance to another level. He formally proposed to Avantika, his long-time girlfriend, for marriage in a rather unusual way. It was oh-so-romantic! 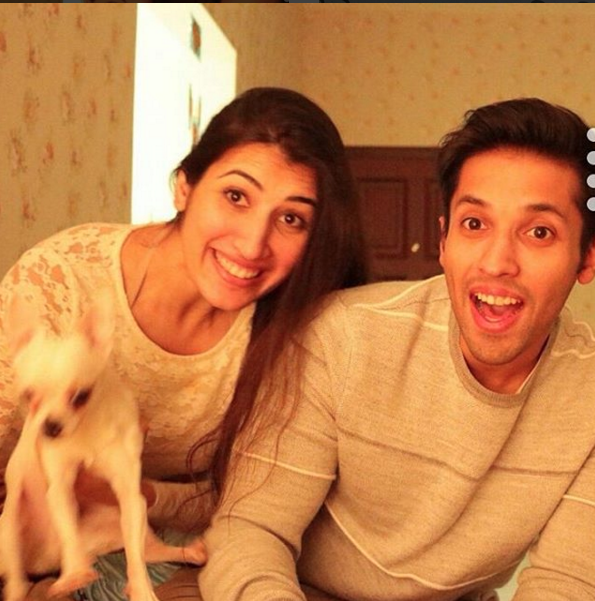 The couple is getting married next week. He proposed to his ladylove with the help of his readers and fans via Twitter, Instagram and Facebook. Cute, isn’t it? 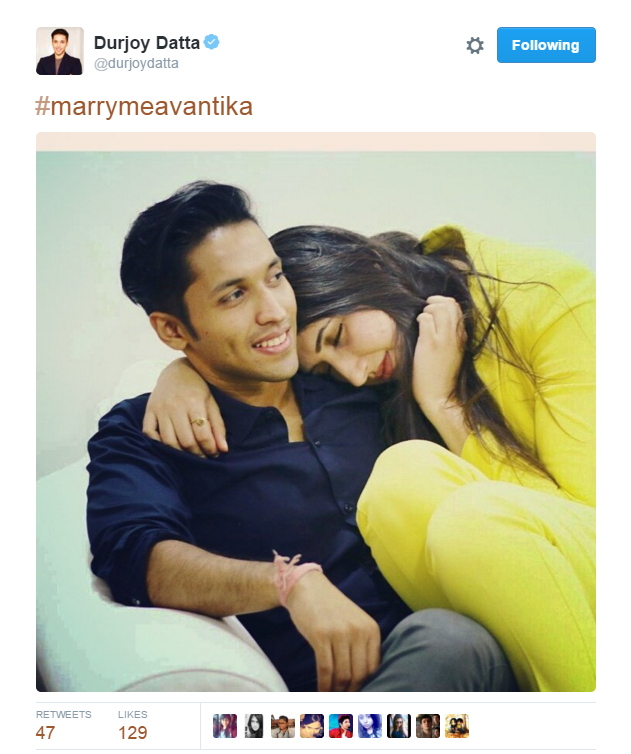 He was tweeting about the proposal with the hashtag #marrymeavantika Recommended Read: Karan Singh Grover Is Legally Free To Get Engaged To Bipasha Basu In March

So, the twist in the tale was that Avantika was in a flight when he started tweeting the proposal messages and asking for help. He had two hours to propose her for marriage. He did that in front of the entire world. 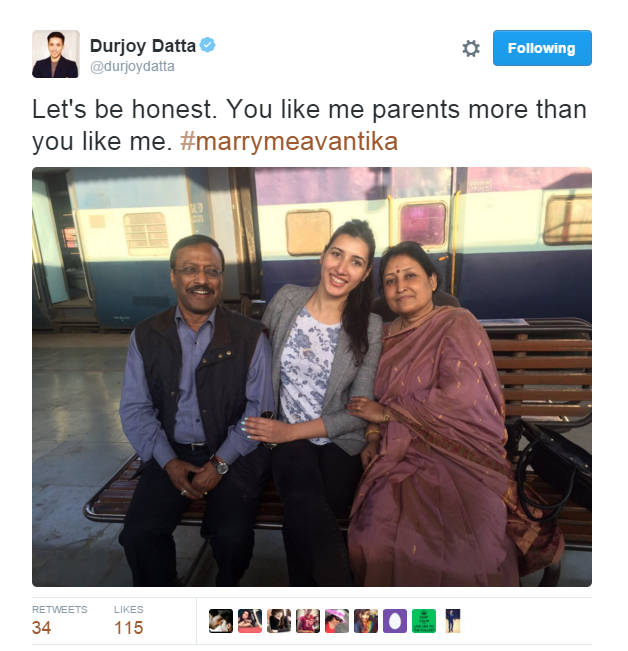 This is what Durjoy said to all his readers, asking for their help:

Here’s a totally natural picture of Avantika and I. It’s not posed for at all.

This might be a little stupid but I got to try it. As lame as it may sound I haven’t really officially “asked” her ( @avantii2) to marry me. Though she has kind of said yes and we are getting married. She alleges I’m too busy with my books, my readers, Instagram, Twitter or Facebook to formally propose her. Though that’s true, a part of the reason is also my overwhelming shyness to do something grand.

So I’m doing what I do best. Hiding behind my phone and asking my readers for help! Okay, I know a lot of you will tell me I’m breaking your heart but seriously you girls can do better. Avantika has to put with the real me, not the one in the books. And that can be quite something. I'm not the best boyfriend or the best fiancé. Far from it. But she is. I think she's gorgeous but thats the least attractive thing about her. She's kind and compassionate and understanding and is the only person I know who can love so deeply and so widely. She's unreal. She's nice to a fault. And I'm the luckiest guy to have her for a lifetime. She deserves much better. But let's not tell her that?

And since I'm not leaving her anytime soon she will have to do with me. I might not be much but i do have readers who sort of like me? Do you? That's all I have. So I'm asking you guys. I'm counting on you.

Ask her to marry me? This is the only time I wouldn't mind you spamming her. Ask her over and over again?

This is the last chapter of Deb, who lets be honest is me, and Avantika.

Help me get my happy ending?

P. S. - She's on a flight right now and has no idea this is going down. So help me bring the brightest smile ever on her face when she lands and finds me with a placard that says The Love Of My Life? That will be the most amazing thing ever.

I love you guys. Just a little less than I love her. But yes, still love.” 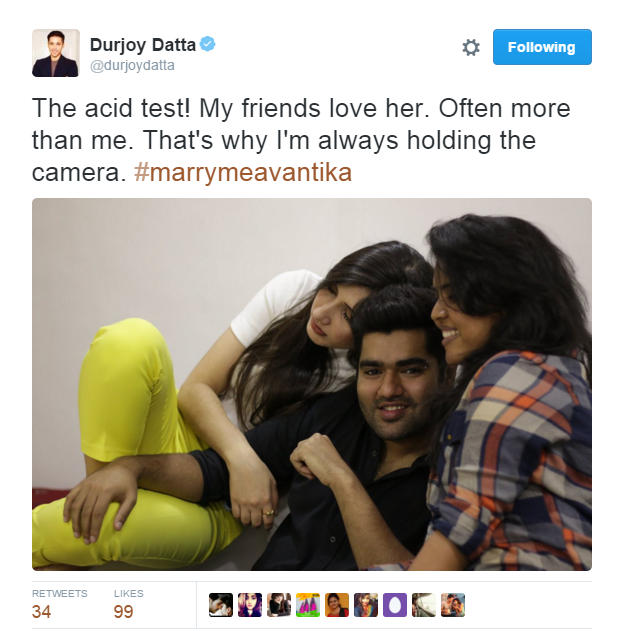 He kept on posting some really cute pictures of Avantika with him and his parents, friends and family. Here is what he was tweeting, and making us go crazy! Must Read: This Wife Saved For Three Years And Fulfilled Her Husband's Dream Of Owning A Harley Davidson

He beautifully dedicated all his novels to his ladylove, saying she is his inspiration.

Take a look at these Famous Indian Celebrity Weddings Of 2015

This handsome man made us go weak in our knees for posting such romantic tweets about his girlfriend. 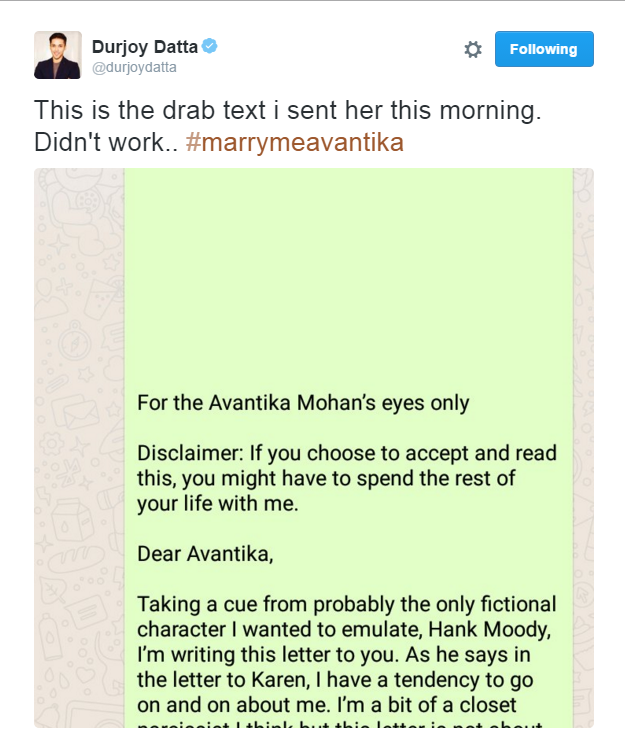 This girl is too lucky! Durjoy was asking his readers for help and people were going crazy with some really cute ideas. Also Read: 4 Things You Must Know About Floral Jewellery

Let us see if Avantika saw all these proposal tweets and how she reacted! And, the lucky girl landed. Here is her answer... Although they are getting married next week, Durjoy did all this to make Avantika feel very special. Well, this is what true love is all about, bringing a big smile on your partner's face.

We are sure that this proposal is the best, one in a million. We are totally loving it! Now that Avantika has said 'Yes', we are eagerly waiting for their wedding next week.