Bigg Boss 13's most loved couple, Asim Riaz and Himanshi Khurana were going through the bout of rumours claiming their breakup. Now, Asim has put a full-stop on them. Check how!

Rumours and Speculations are a part of the glamour world. Every day we get to hear about someone’s secret relationship or someone’s breakup, and we think that now our favourite stars have turned habitual to this as most of them have ‘been there, done that’. Their every post is scrutinised and every move can lead to some mass fire rumours. Recently, Alia Bhatt and Ranbir Kapoor were speculated to have called their relationship off, as Ranbir was nowhere seen in Alia’s birthday pictures, but Alia shut them all with just one post. That is basically the power a single Instagram post or a single tweet holds in the lives of celebrities. After Alia-Ranbir, Bigg Boss 13’s most loved couple, Asim Riaz and Himanshi Khurana had to go through the bout of rumours claiming their breakup. And now, Asim has put a full-stop to them. (Also Read: BFFs, Kareena Kapoor Khan, Malaika Arora And Others Are Missing Someone Over Video Call)

For the uninitiated, on April 7, 2020, Himanshi Khurana had taken to her Twitter handle and had tweeted something that got all #asimanshi fans worried. Her tweet could be read as "No one wants to see us together." This started all the speculations of the couple’s breakup.

Himanshi, who is active on her social media handles, has often been trolled by fans. Time and again, the Punjabi actress, tweets regarding Asim and their relationship, and people have something to talk about. But this time she had really sounded heartbroken, which lead to speculations, but now she found support in her boyfriend, Asim Riaz. Asim, clearing all the air about the couple’s breakup, replied to his ladylove as "@realhimanshi BABE I AM WITH YOU  NO MATTER WHAT THEY SAY OR DO.!!!" Take a look:

Not just this, the couple continued their PDA giving a sign to their fans that all is well in their love paradise. On April, 9, 2020, Asim took to his Instagram handle to share a black and white picture where he could be seen standing against the light, and captioned it as “Black and white”. Girlfriend, Himanshi enlightened his picture with her comment “Nutella”, making it obvious that the two are still madly in love with each other. Take a look: 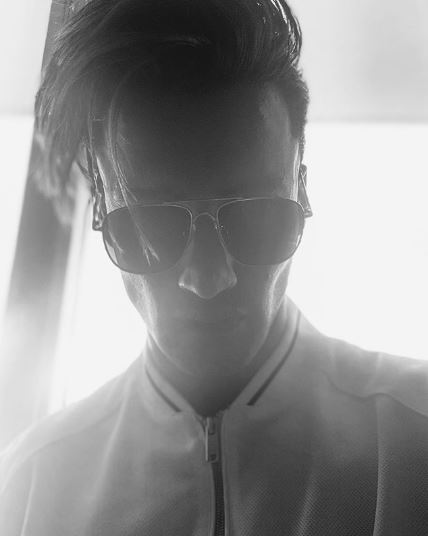 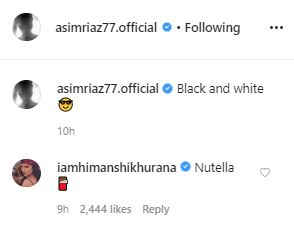 Himanshi had confirmed her relationship with Asim in an interview with SpotboyE. On the question of whether they're dating or not, Himanshi had said, "Yes, we are dating!" She had further shared that she had met Asim's family, "Yes. I met them, It was a great experience. It was only because of the show- everyone feels people are fake inside, isliye woh itna confusion aur miscommunication ho raha tha. Jab tak aap bahar aake baat nahi karte, tab tak cheezein clear nahi hoti. Now, it's all good." Talking about the age difference between Asim and herself, Himanshi had said, "It doesn't matter anymore. What is important is that people love each other. Look at Priyanka Chopra Jonas and Nick Jonas!" (Also Read: Farhan Akhtar Posts ROFL Video Of Girlfriend, Shibani Dandekar Trying To Terrify Their Dog, Tyson) In a conversation with the SpotboyE, Asim Riaz's brother, Umar Riaz too had revealed that his brother, Asim Riaz is in a relationship with Himanshi Khurana. The surgeon had talked about his brother’s relationship with open heart, and had said “I am happy about it. I will not oppose my brother. My happiness lies in his happiness.” On being asked, what does he think about his brother's choice, Umar had replied “You marry someone who understands and supports you. If Asim feels he has found that someone, I have no objection.” (Don't Miss: Sara Ali Khan Plays Her Favourite 'Knock-Knock' Joke On Brother, Ibrahim Amidst The Lockdown) Well, it is a treat for all #asimanshi fans! The lockdown has made us close to our family, but still, there are lots of people that we miss being with. You cannot meet your cousins, friends and for some, lovers as well. It is getting hard for people to stay away amidst the coronavirus scare and couples are bored