Asha Parekh got brutally trolled for her recent statement about westernized culture as netizens called out the veteran actress for fat-shaming women.

Veteran actress, Asha Parekh got mercilessly trolled on social media after her take on Indian women wearing western outfits. Speaking at the IFFI 2022, Asha talked about westernized culture and shared her views on Indian women copying actresses and wearing gowns at weddings. Not just this, the Kati Patang actress also body-shamed women for donning an outfit despite their size.

However, such strange and orthodox views coming out of the actress’ mouth made netizens upset, and they did not think twice about calling out her statements. Taking to Twitter, netizens trolled the veteran actress and even stated that such derogatory comments were not expected from an actress of her stature. One of the comments can be read as:

Mira Rajput Kapoor Gives A Befitting Reply To Trollers, Questioning The Colour Of Her Feet

“Asha ji …!!! Of all the people you are saying this??? Are you really fatshaming women who want to wear what they want to at their own weddings? Should we now go and compare you to ur contemporaries??? We won’t cause we aren’t you!.” 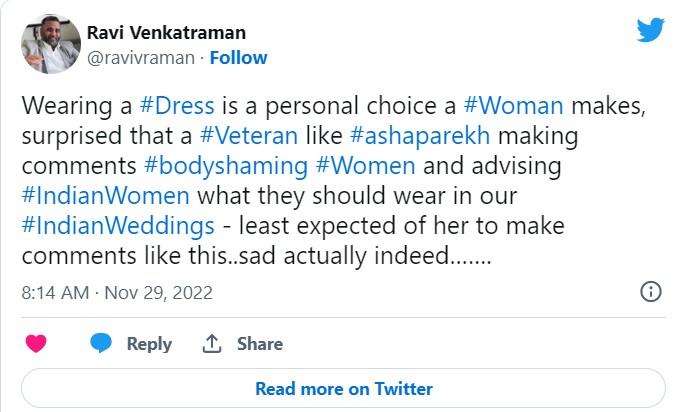 Not just this, a user also posted a picture of Asha Parekh from one of her vacations with actresses, Helen and Wahida Rehman. In the picture collage, Asha Parekh was seen donning jeans and a top for her outing and wrote:

“#ashaparekh in western clothes along with Helen n Wahida Rehman at Andaman Islands… why this silly comment.” Asha Parekh is one of the pioneers of Indian cinema, who is known for her evergreen films like Kati Patang, Teesri Manzil, Love in Tokyo, Caravan, Ghunghat, Aan Milo Sajna, Dil Deke Dekho and many more. She was also the highest-paid actress of her time. Talking about her personal life, Asha Parekh is single at the age of 80. She had once claimed that it was her reputation of being unapproachable because of which people were hesitant to ask her for marriage. She was romantically involved with director, Nasir Hussain. Over the years, Asha has never shied away from addressing her love for him and stated that she never wanted to be a home-breaker, because of which she did not marry Nasir. 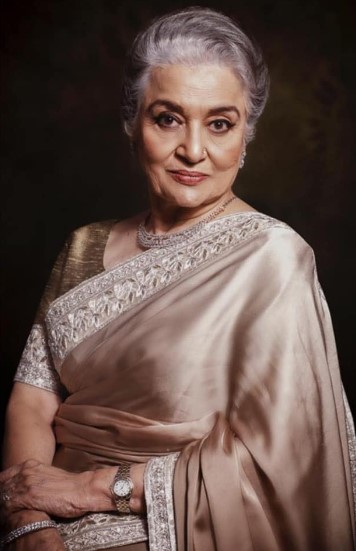 What is your take on Asha Parekh’s statement on westernised culture? Let us know.

Also Read: Amitabh Bachchan's Monthly Salary In The 60s Was In Four Figures, Lived With 7 Men In A Small Room