Shah Rukh Khan's son, Aryan Khan, and daughter, Suhana Khan, were spotted at the IPL 2022 Auction. As per reports, they might replace their daddy and take responsibility.

'King Khan' is not only known for his acting and charisma in Bollywood but also worldwide. Talking about Shah Rukh Khan's popularity, it has no limits. From his signature pose inviting a hug with open arms to his cute smile, expressions, acting skills, and much more, he has etched a special place in millions of hearts. For the unversed, he had got married to his ladylove, Gauri Khan, on October 25, 1991. And it was on November 13, 1997, when SRK and Gauri had become proud parents with the arrival of their son, Aryan Khan. Later, they had welcomed their daughter, Suhana Khan, into their lives on May 22, 2020, and their second son, AbRam, on May 27, 2013.

With a flick of the eye, Bollywood's Badshah, Shah Rukh Khan's kids, Aryan Khan and Suhana Khan, grew up. And now, they have been seen replacing their father at certain public events. The star kids are also often seen showering love on their dad, SRK, on their social media handles. On November 2, 2021, although Suhana was in the US, she had made sure to wish her daddy on his birthday, with some unseen pictures from their memory lanes. She had shared a priceless monochrome picture in which Shah Rukh was kissing his baby girl. In the background, we had spotted her mother, Gauri Khan, sitting on a chair. The doting daughter had written, "Happy Birthday" atop it, followed by a pink heart emoticon.

After Aryan Khan's Release From Jail, His Sister, Suhana Khan Plans To Return To Mumbai Soon

Next Read: Anushka Sharma Cooks Food For Her Parents, Shares Glimpse Of Their Home Garden And Kitchen 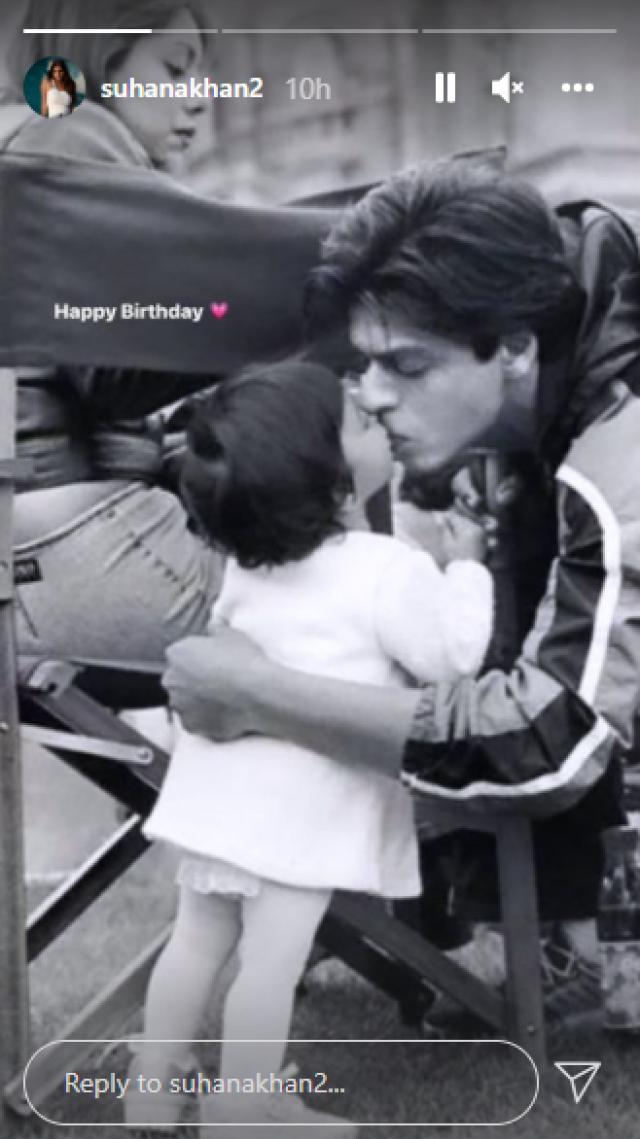 On February 11, 2022, Shah Rukh Khan's son, Aryan Khan, and his daughter, Suhana Khan, spotted replacing their daddy at the IPL 2022 Auction. As soon as the star kids were clicked, their pictures went viral on social media. In the pictures, Aryan Khan and Suhana Khan were seen having a conversation amidst the auction while representing their team, KKR (Kolkata Knight Riders). They were earlier spotted at the Pre-IPL Auction briefing too. Check out the pictures below: 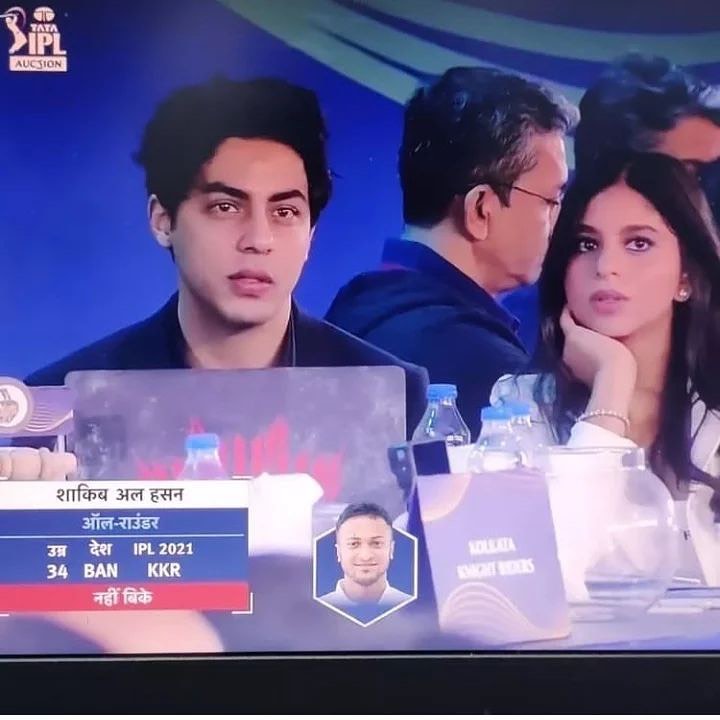 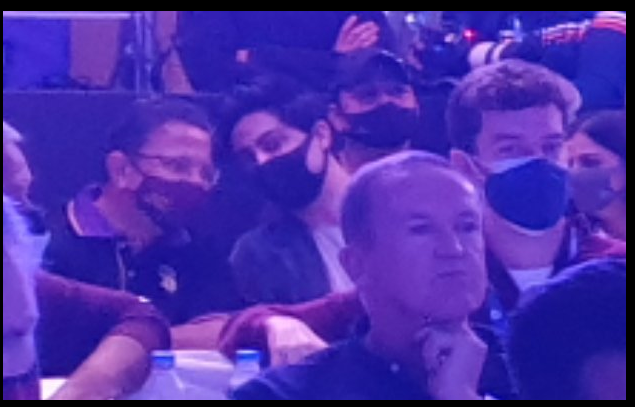 On October 3, 2021, SRK and his family had got the biggest blow when the Narcotics Control Bureau had arrested Aryan after they had raided a cruise ship. The court had rejected Aryan's bail multiple times. However, on October 28, 2021, the star kid was granted bail, and the news had come as a pleasant surprise to SRK and his fans, who had been rooting for Aryan since his arrest. Mukul Rohatgi, who had appeared or Aryan Khan's case, had revealed that Shah Rukh Khan had tears of joy in his eyes when he had met him after the bail hearing. Talking about the same, the former Attorney General had said:

"He was a relieved man [today]. He had been a worried man. He used to make his own notes for the case and discuss them with me over the last few days."

Next Read: Siddhant Chaturvedi Reveals Uncle's Funny Reaction To His Kiss With Deepika Padukone In 'Gehraiyaan' 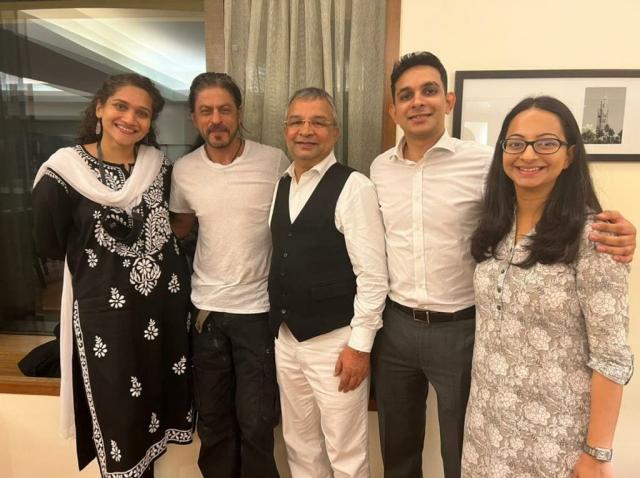 In a throwback interview with Rediff.com, Shah Rukh had spilt the beans on why he had chosen the name Aryan for his son, and his reason will make you ROFL. Talking about the same, Shah Rukh had stated:

"We just named him Aryan. I don't know. I just liked the sound of the name. I thought when he tells a girl ki my name is Aryan. Aryan Khan, she'll be really impressed. His looks have come from both of us. Actually, Gauri and I have similar features -- both of us have big eyes and thick lips. I don't know... He's got expressions like mine, I think... But he's a mixture. And no, I haven't changed any diapers!" 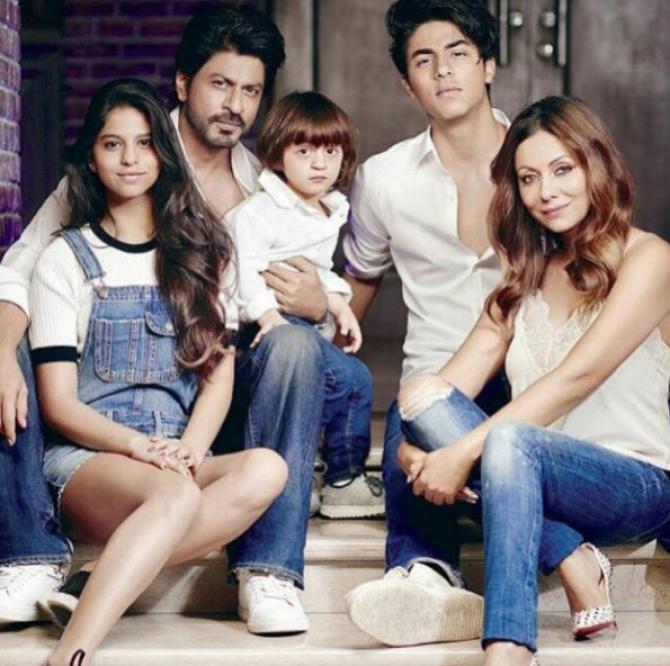 During an interaction with David Letterman, Shah Rukh Khan had proved that he could not stand any other 'man' in his daughter's life. He had shared that he loves solving every problem of his kids but hates it when the problem is related to a 'boyfriend or girlfriend'. Shah Rukh had said:

"I sort out all their problems and hate it when they have boyfriend/girlfriend problems. I just want to say 'kick that person out' but you know then I say, 'in life, it happens that you have to give and take in relationships darling.' I hate explaining it to her. I want to tell her this guy is no good. But I have to sometimes choose presents for him which is like the worst thing possible. 'Papa what do you think he'll like?' Oh, he'll like a 'enacts punch' on his face." What do you think about Shah Rukh Khan's kids, Aryan and Suhana, taking their daddy's responsibilities on their shoulders? Let us know. Bollywood actor, Shah Rukh Khan's daughter, Suhana Khan is making headlines with her fashion outfits. The gorgeous star kid had made headlines at the age of eighteen by getting featured as a cover girl in Vogue India magazine. It was the start of her adventurous journey into Bollywood. Time and