From golden and black coloured balloons, photo frames of his childhood pictures to the unseen mushy photographs of the couple, Arpita Khan Sharma surprised Aayush Sharma on his birthday. The arrival of a baby in a couple’s life begins a sea change in their husband-wife relationship and while they settle with the life with a newborn, their romance takes a backseat. Though your kid becomes the priority, putting your spouse first once in a while and rekindling the romance in your relationship will not let the love fizzle out amid your duties as parents. Birthdays and anniversaries come as an opportunity for you to make an effort, go an extra mile and make your partner feel special. Arpita Khan Sharma and Aayush Sharma are an inspiration for the couples out there, as despite his hectic work schedule and her managing their two kids, Ahil Sharma and Ayat Sharma with household chores, they squeeze in some ‘us’ time. (Also Read: Gauri Khan Enjoys Pampering Session With Suhana Khan On 29th Wedding Anniversary Sans Shah Rukh Khan)

Having met through common friends, Salman Khan’s sister and heartbeat of the Khan family, Arpita Khan and her soulmate, Aayush Sharma, son of politician Anil Sharma of Himachal, had dated for a while before tying the knot on November 18, 2014. Though Arpita and Aayush prefer to keep their personal life under wraps, they don’t shy away from expressing their love on social media, especially on special occasions. For instance, on October 26, 2019, Arpita had posted a video to wish her hubby on his birthday. She had captioned it, “Dearest Aayush, as you turn a year older today we wish you a very very happy birthday. May this year only be filled with love, success, happiness & all that your heart desires for. Always be this amazing soul you are today, tomorrow & forever. Thank you for always being there for us & having our backs. Stay blessed hubby, we love you very very much @aaysharma.”

To mark Aayush Sharma’s 30th birthday, Arpita Khan Sharma planned a beautiful surprise for her hubby, Aayush Sharma. From golden and black coloured balloons, photo frames of Aayush’s childhood pictures to the mushy photographs of Aayush and Arpita and his unseen clicks with their kids and families, Aayush was swooned with the surprise his wife had planned for him. Sharing a glimpse of his birthday surprise, Aayush wrote “Never stops surprising me… thank you @arpitakhansharma” on the video.

On August 3, 2020, Arpita Khan Sharma had celebrated her 31st birthday with her hubby, Aayush Sharma, kids, Ahil Sharma and Ayat Sharma, and her in-laws in Mandi, Himachal Pradesh. To mark Arpita's 31st birthday, Aayush had penned a heartfelt wish on his IG feed along with two mushy pictures with her. Expressing why her birthday is important for them as family, Aayush had written for 'the strongest woman' of his life, "Here's wishing the strongest woman, I know a very Happy Birthday. From standing backstage while cheering my performance with tears in your eyes to standing by my side unconditionally when things were not shaping up as planned. From the subtle appreciation to the loud private criticism. You have really played an important part in shaping the man that I’m today. So Thank you for coming into my life. You’ll always be my strength. Your birthday is a very special occasion for us as a family, Because we are celebrating the birth of a wonderful daughter, sister, wife, mother but more importantly an amazing human being. Love you Arpita." (Also Read: Shaheer Sheikh Makes Relationship With Ruchikaa Kapoor Insta-Official, Captions Her Pic As 'My Girl') 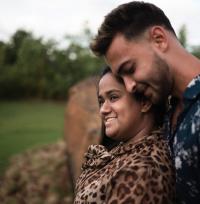 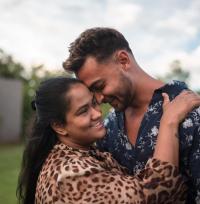 The quality time with family that the celebs often miss out on due to their hectic work schedules, they had made up during the lockdown. Aayush Sharma too, made the most of his family time with his wife, Arpita Khan Sharma, son, Ahil Sharma and daughter, Ayat Sharma. Sharing the beautiful memories he had made with his family during the lockdown, Aayush had written, “Stay at home... spend time with your family and create beautiful memories Make the most out of this quarantine & stay safe. #quarantine #familytime.”

In 2016, Arpita Khan Sharma and Aayush Sharma had stepped into the next phase of their married life and had embraced parenthood with the arrival of their son, Ahil Sharma. Three years later, their family got completed with the arrival of a little angel in their lives, whom they have named Ayat Sharma. A few days ago, Arpita had posted an IG story, a childhood picture of her hubby, Aayush and had written, "Look at Ayat back in the day! @aaysharma" atop it. Aayush had reposted the same picture on his IG story and had written, "Hahaha... she's a Time Traveler" atop it. In the picture, we could see baby Ayat's striking resemblance with her father and we couldn't agree more with the captions of Arpita and Aayush. (Also Read: Kajal Aggarwal Radiates Pre-Wedding Happiness As She Poses With Her Hubby-To-Be, Gautam Kitchlu) 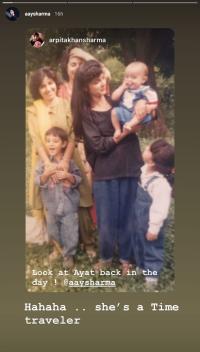