Arjun Rampal and Mehr Jessia got separated after a long married life. Currently, Arjun is dating Gabriella Demetriades. The couple is expecting their first baby. Here are her baby shower pictures! Talk of surprises and our favourite Bollywood celebrities know how to actually surprise you in a jiffy. While your casual social media scrolling, you would sometime stumble upon news that is so not expected! Something exactly this happened when last month when Arjun Rampal announced the news of his girlfriend, Gabriella Demetriades’ pregnancy. (You May Also Like: Abhishek Bachchan Is On Cloud Nine As His Nephew, Agastya Nanda Completes His Graduation)

On April 23, 2019, Arjun and Gabriella took to their respective Instagram handles to share this happy news with the rest of the world. And ever since, rumours of Gabriella’s baby shower have been copping up every now and then. A report had earlier shared that Arjun will be hosting a grand baby shower ceremony for his ladylove. And just like revealed, yesterday, on May 25, 2019, the mom-to-be had a blasting baby shower ceremony.

All Arjun and Gabriella’s friends and family members were present at the do. Although, rumours had it that Arjun Rampal’s estranged wife, Mehr and their kids, Mahikaa and Mahira were also supposed to be present, but they cannot be spotted in any of the pictures. What grabbed everyone’s attention was the fact that the parents-to-be twinned in white for the baby shower ceremony. Here, Checkout the pictures of the celebrations:

Arjun and Gabriella had announced the pregnancy news on social media with the following picture. While Arjun had captioned his post as, “Blessed to have you and start all over again. Thank you, baby, for this baby". Gabriella, on the other hand, had written, "Grateful for you two can’t wait to meet you." (Also Read: Shilpa Shetty Is The Mom Of The Year As She Throws A Harry Potter Themed Birthday Party For Son)

For the ones who don’t know, Arjun’s ex-wife and their kids have taken this news supportingly. A SpotboyE report had then stated, “The couple did their best to keep the pregnancy under wraps for the last six months. It turns out that several of their friends were kept in the dark too, including Mehr Jesia, Rampal’s wife of 20 years and mum to their two daughters, Mahikaa, 17, and Myra, 13. Mehr has in fact taken the news rather sportingly. Her friends say that even though they haven’t filed for divorce yet, Mehr has come to terms with the fact that Rampal has moved on personally.”

It is to be noted here that Arjun and Mehr are not yet divorced. But as per a recent report, conjectures have it that the couple is still not divorced. The report had claimed, “They are still working out the financial terms of the separation. Mehr is a wonderful mother and wants to do what works best for her children.” (Do Check: Ishaan Khatter Thinks 'Bhabhi' Mira Kapoor Is Just A Year Older To Him And Yet She Is A Perfect Mom)

On the professional front, Arjun was last seen in Paltan, which was directed by J. P. Dutta. The movie had also starred Jackie Shroff, Sonu Sood, Harshvardhan Rane, Esha Gupta, Sonal Chauhan. The movie was based on the 1967 Nathu La and Cho La clashes along the Sikkim border after 1962 Sino-Indian War. (Don't Miss: Kajol And Daughter, Nysa Devgan Get Papped At The Airport, Fans Suspect The Actress Is Pregnant)

What lovely pictures of Gabriella’s baby shower! What do you guys have to say about these? Do keep us posted! 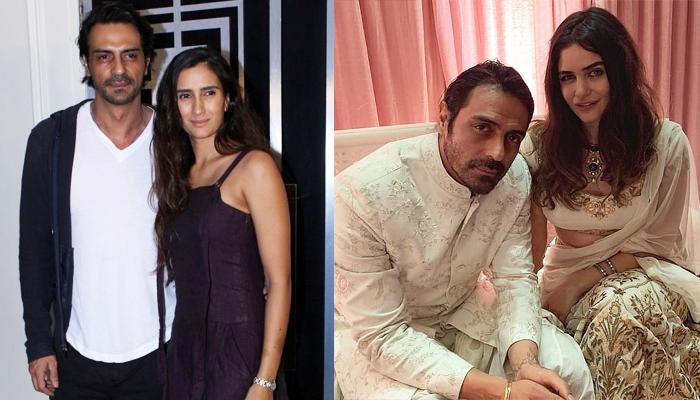 Beyond the glitz and glamour, professional bonds and box-office, our Tinseltown is an ambivalent place where certainty is not anyone's virtue. You never know who is/will date who and when a happily married couple calls it quits! Even after 15-20 years of marital bliss, married couples do separate in Bollywood- to