Anushka Sharma penned a heartfelt note dedicating her darling husband, Virat Kohli who snatched victory from defeat against Pakistan in the T20 World Cup 2022 and mentioned her happiness. Check out!

Bollywood actress, Anushka Sharma and Indian cricketer, Virat Kohli are one of the most adorable couples in B-town. For the unversed, the madly-in-love duo tied the knot on December 11, 2017, and were blessed with their princess, Vamika Sharma Kohli on January 11, 2021. Since then, though the doting parents didn't reveal their baby's face, they keep on sharing cutesy moments of their lives. A few moments back, as Virat Kohli snatched the victory trophy for team India from Pakistan in the T20 World Cup 2022, his loving wife, Anushka Sharma penned a heartfelt note dedicating her darling husband and mentioned her happiness.

Anushka is indeed a loving wife, and glimpses of the same are found on her social media handles. For instance, on August 4, 2022, taking to her IG handle, Anushka had shared two goofy pictures with her darling hubby, Virat. In the pictures, the duo was seen twinning in white T-shirts paired with powder blue-coloured jackets and making goofy poses with each other. In one of them, the duo were also seen side-hugging each other while posing for the lens. Along with this, Anushka joked about starting a 'brand' and complimented her hubby. She had penned:

“Always wanted to start a band with a cute boy.” 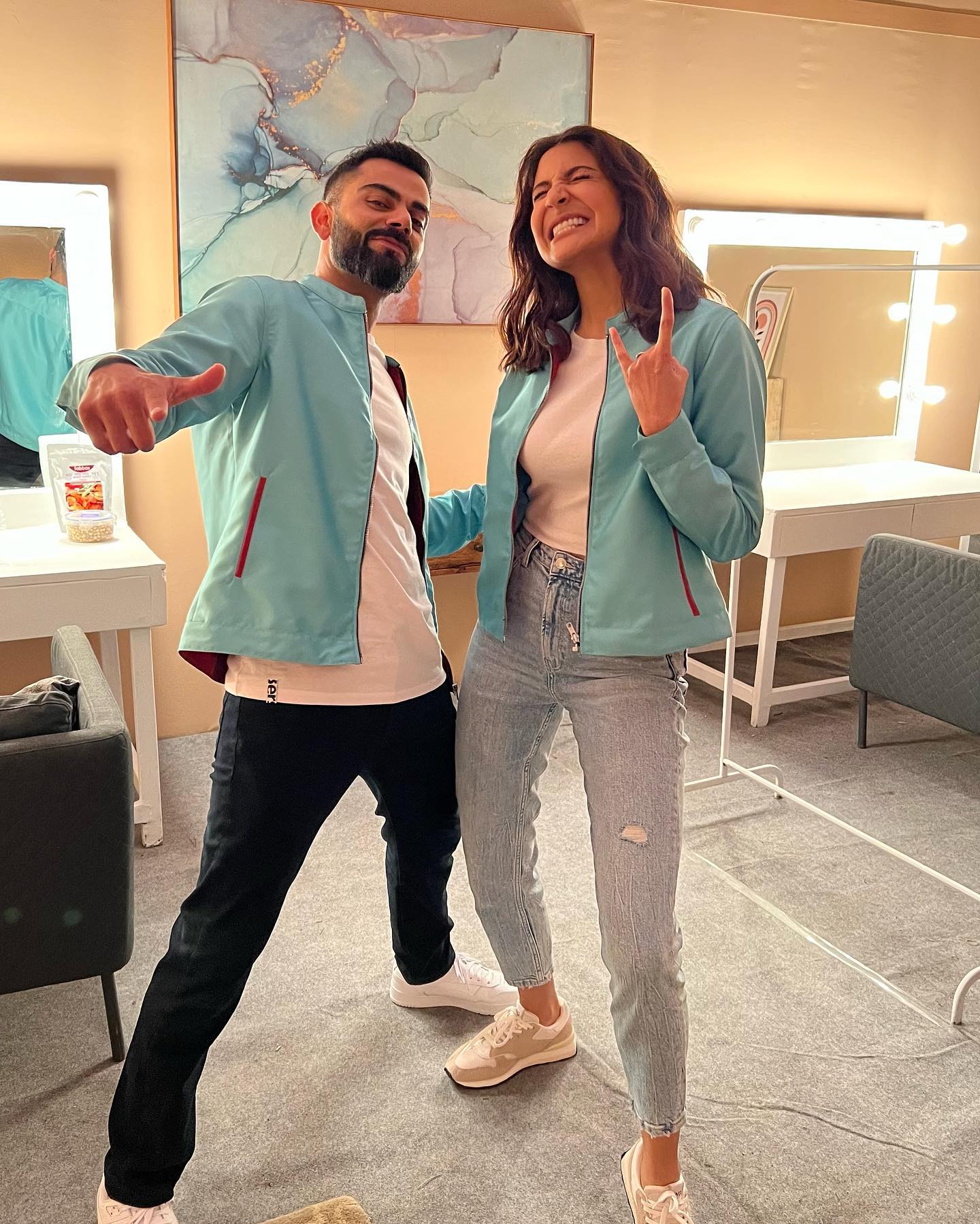 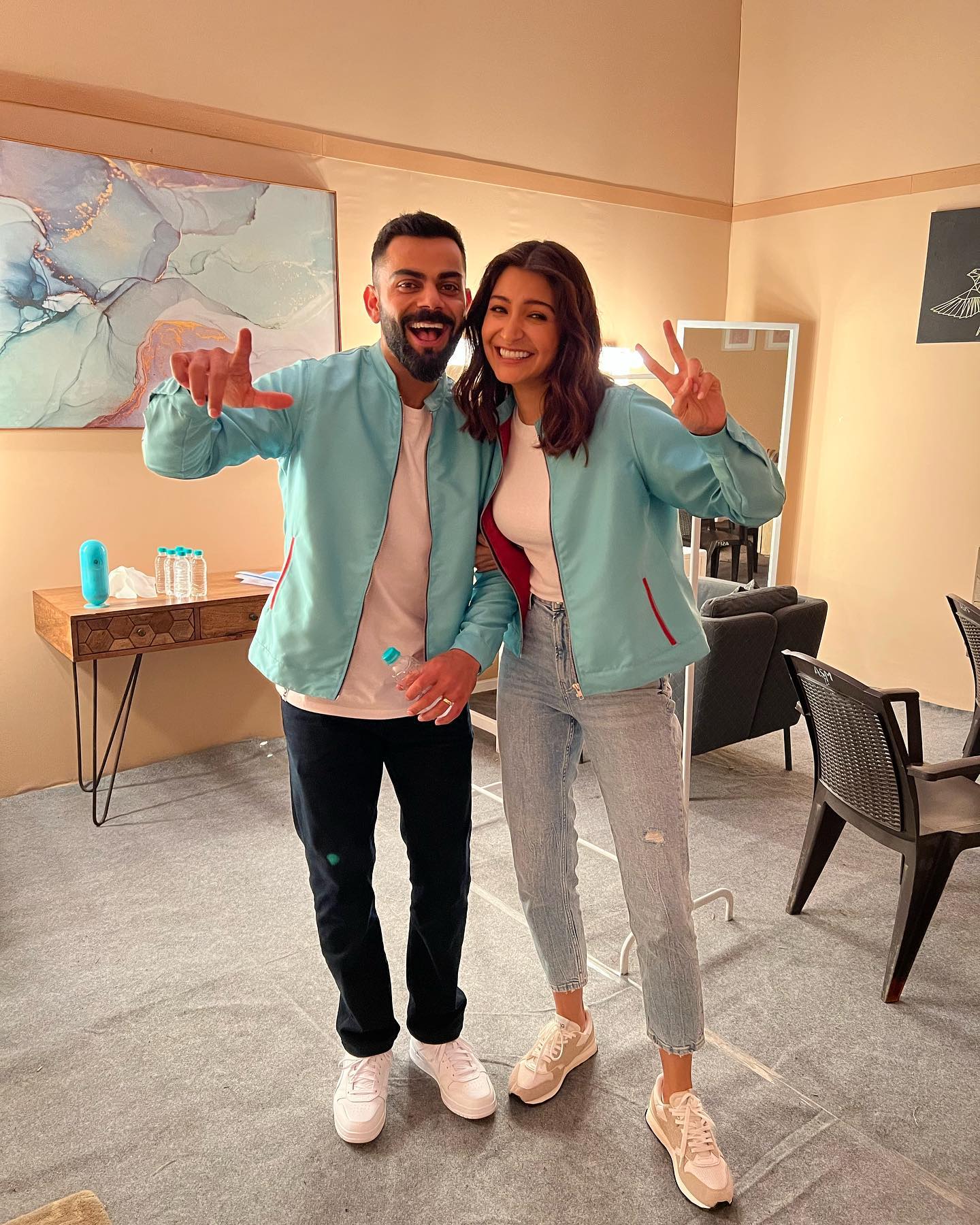 A few moments back, Anushka took to her IG handle and shared a series of pictures featuring her darling hubby, Virat along with his other teammates, enjoying the moment after winning the match. In the first picture, we can also spot a glimpse of Anushka and her daughter, Vamika. Moreover, along with pictures, Anushka penned a long note revealing her happiness and excitement for Virat's victory. The darling wifey's note can simply prove her love and support for her hubby. She wrote:

"You beauty!! You freaking beauty!! You have brought sooooo much joy in peoples lives tonight and that too on the eve of Diwali! You are a wonderful wonderful man my love. Your grit, determination and belief is mind boggling !! I have just watched the best match of my life I can say and although our daughter is too small to understand why her mother was dancing around and screaming wildly in the room, one day she will understand that her dad played his best innings that night which followed after a phase that was tough on him but he came out of it stronger and wiser than ever before! So proud of you !! Your strength is contagious and you my love, are LIMITLESS!! Love you forever and through thick and thin." 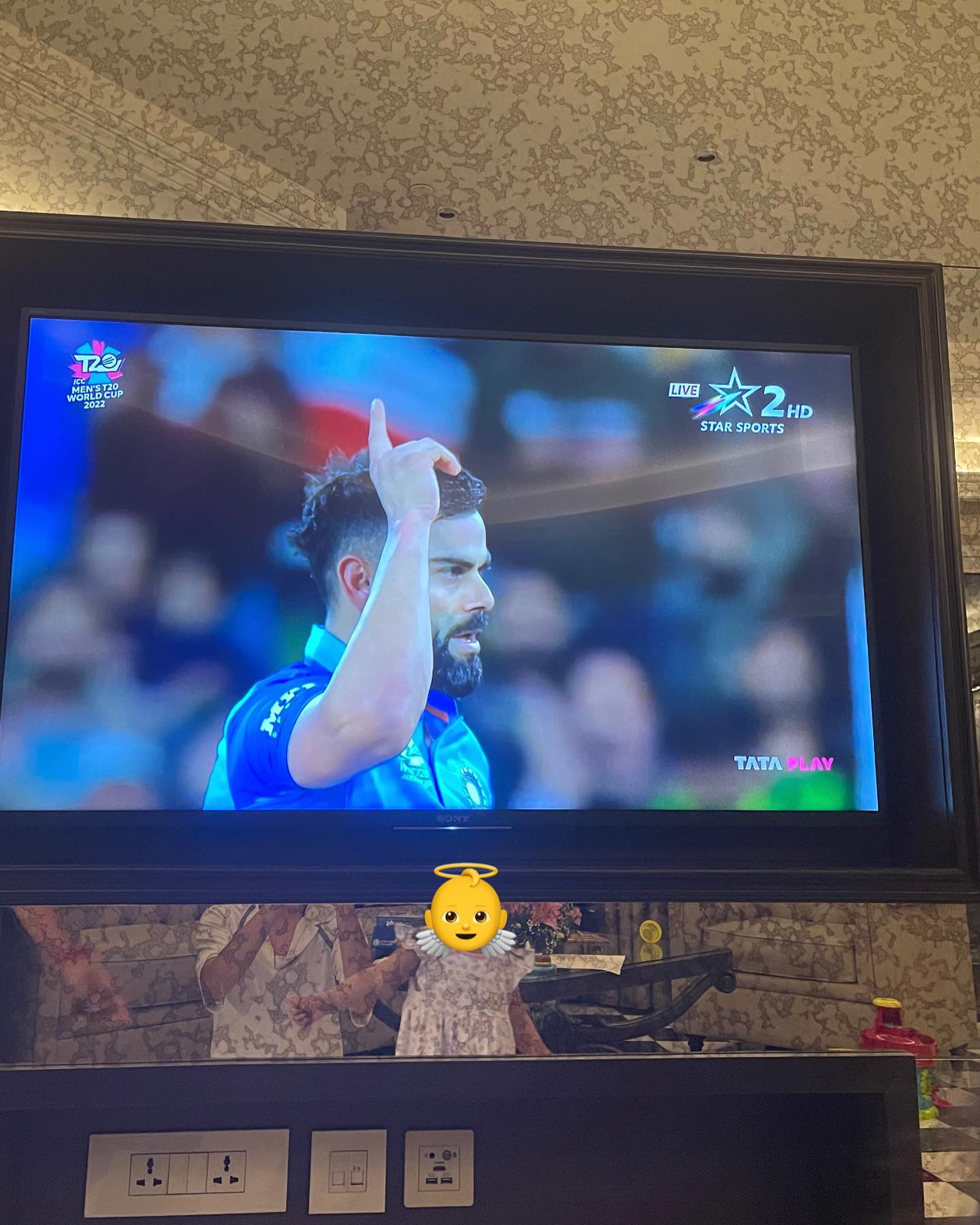 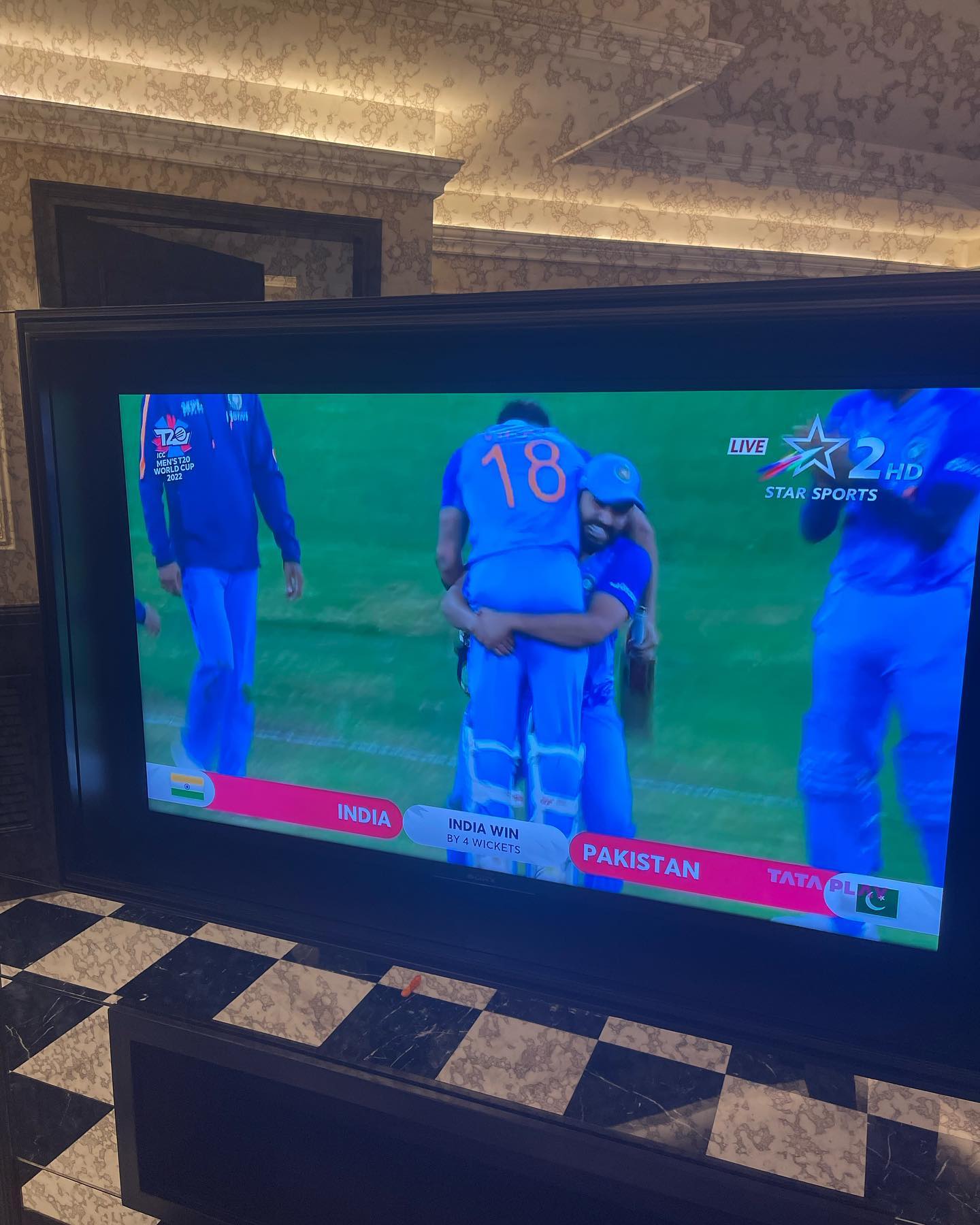 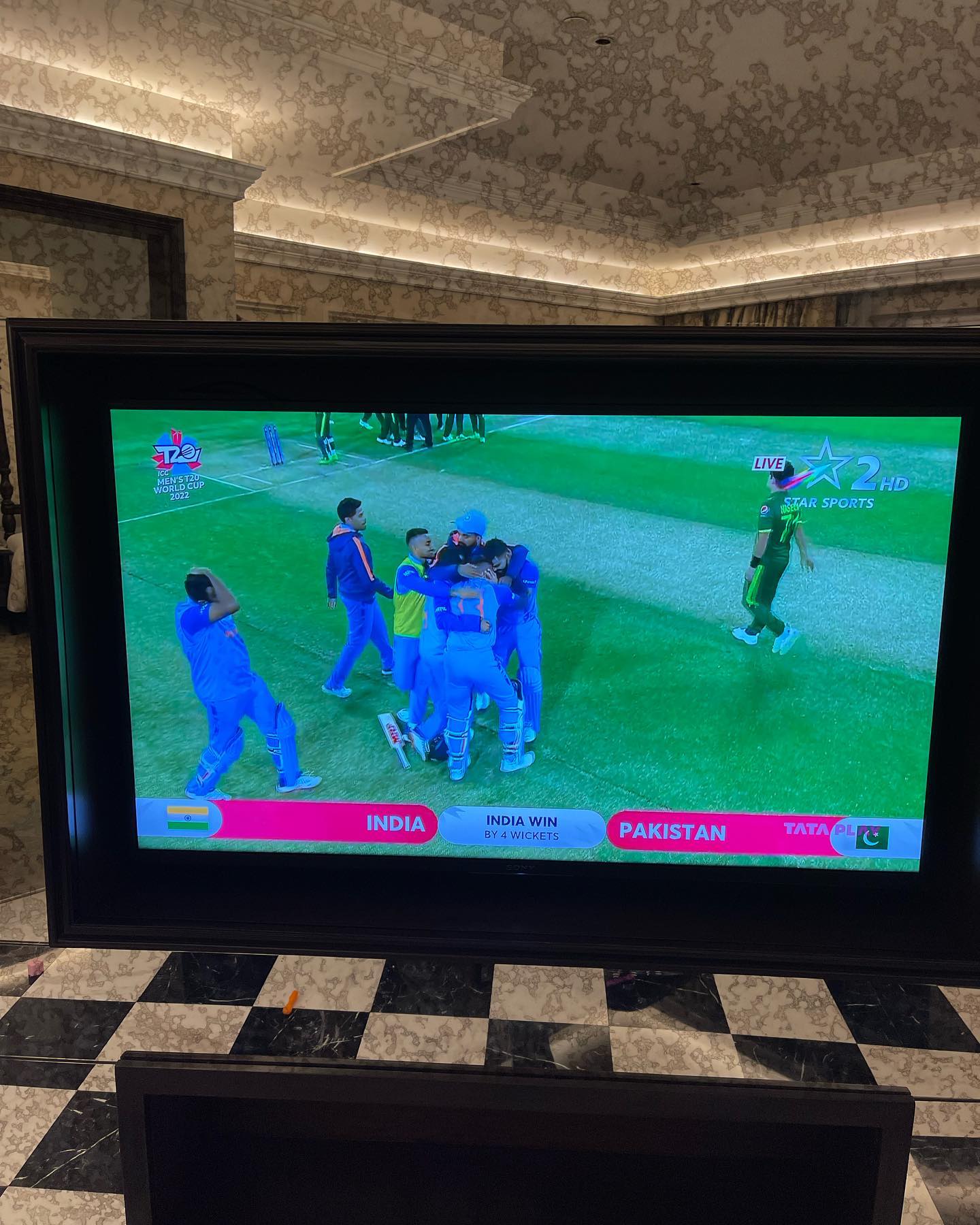 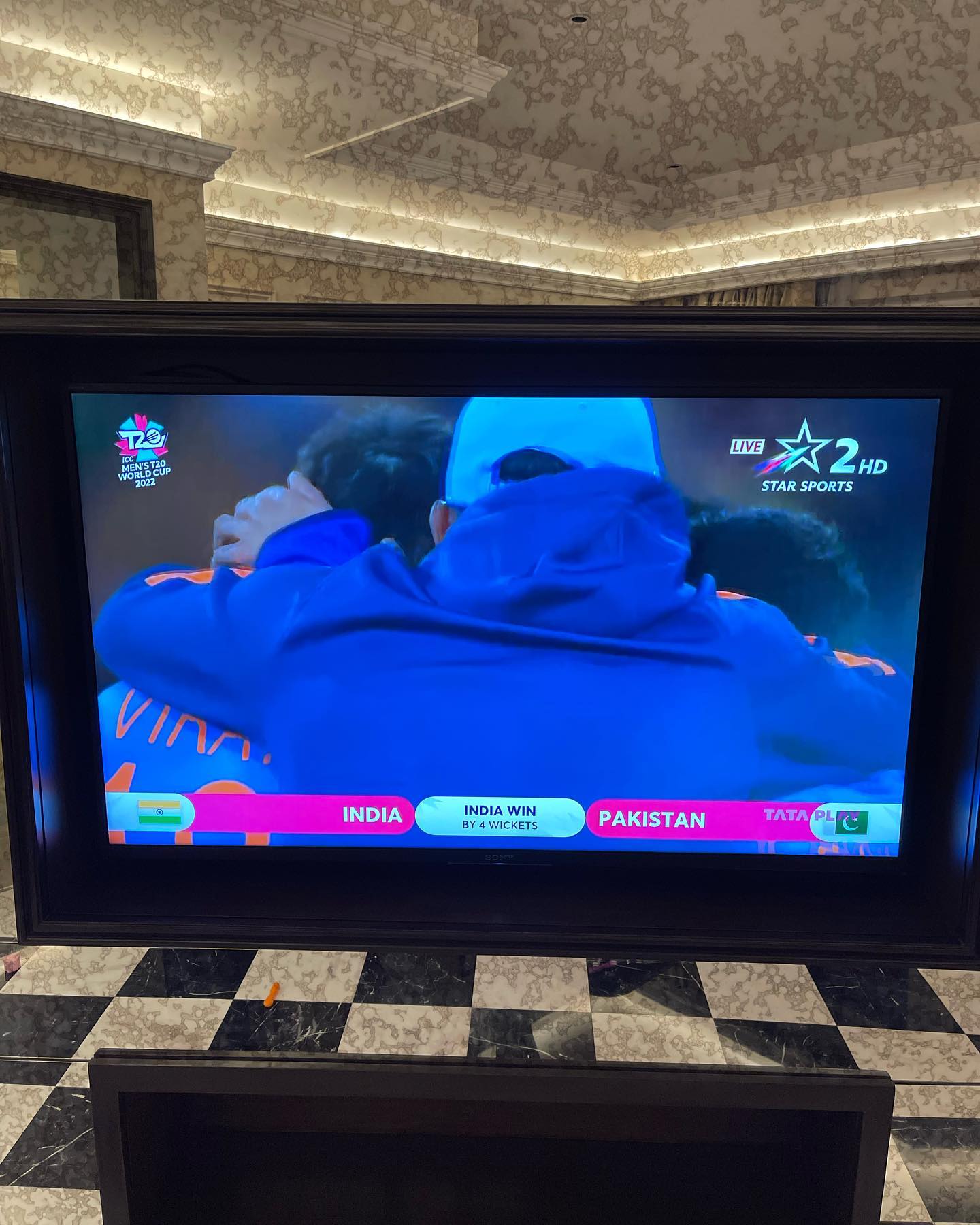 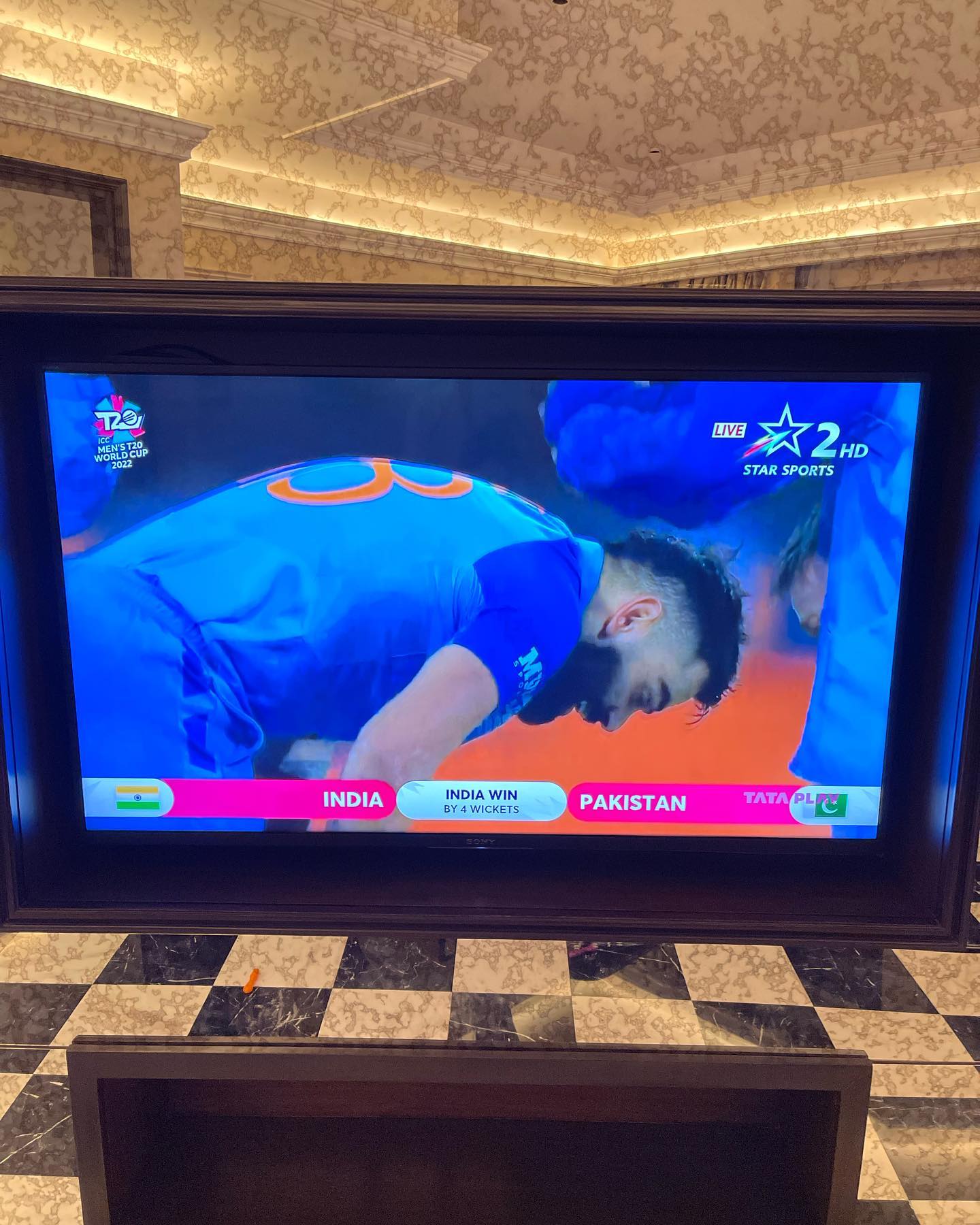 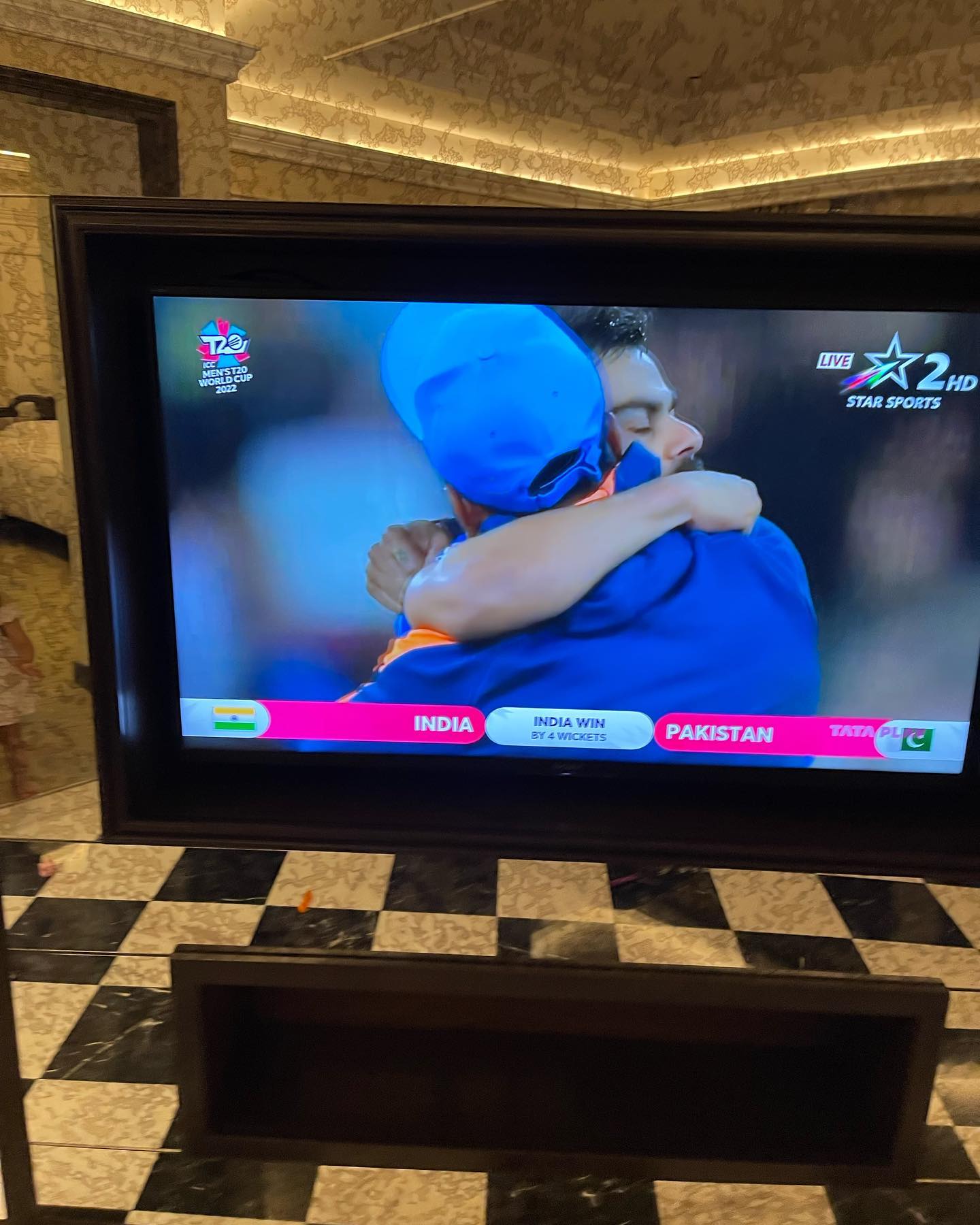 Well, this wasn't the first time when Anushka cheered the bestest for her darling hubby, Virat. Earlier, when Kohli was playing India vs Pakistan-Asia Cup in Dubai, his darling wife, Anushka Sharma couldn't be with him. However, she didn't miss a chance to cheer him up from home. Taking to her IG handle, Anushka shared a screengrab of her TV screen wherein the match was going on. The picture featured her cricketer hubby from the ground, and indeed it spoke volumes about Anushka's love and support for Virat. Atop the screengrab, she attached a red-heart gif, and it was simply unmissable. Check it out: 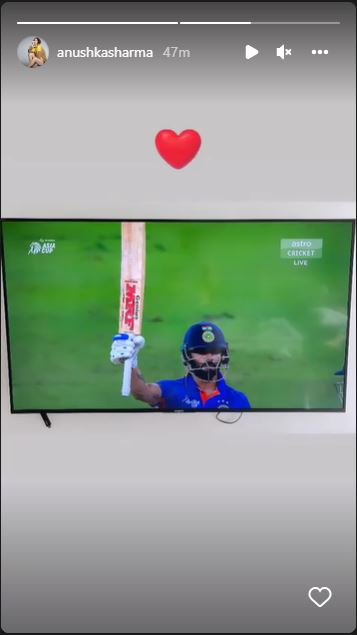 Earlier, on July 16, 2022, we had stumbled upon a few glimpses of the doting parents, Virat and Anushka, while they were taking a stroll on the streets of the UK with their baby girl, Vamika. For their family outing, Virat looked handsome in a black T-shirt paired with grey denim. On the other hand, Anushka looked stunning in a multi-coloured hoodie paired with a beige-hued top and denim pants. In the glimpses shared by one of their fan pages, Virat could be seen walking with Vamika's stroller while talking with one of his acquaintances, and Anushka was seen following them. Check it out below:

Isn't Anushka the most loving wifey in B-town?