Anushka Sharma Blew A Flying Kiss To Virat Kohli After He Won The Match. Check Video Inside!

Anushka Sharma Blew A Flying Kiss To Virat Kohli After He Won The Match. Check Video Inside! 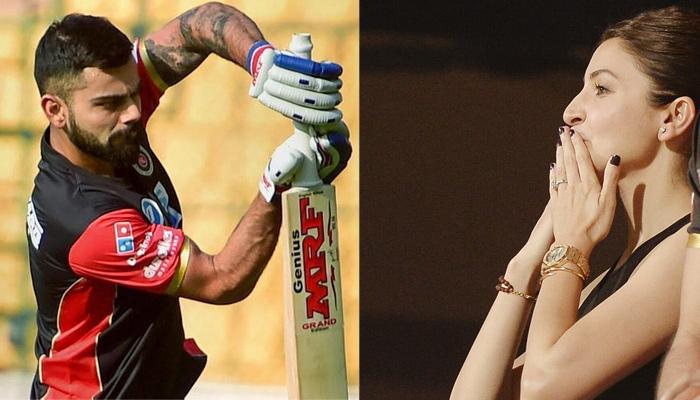 This ‘just married’ couple makes headlines almost every day! Any guesses as to whom we are talking about? Hint: Both of them are brilliant A-listers in their own field (Bollywood and cricket). Yes, you have successfully guessed it right from the cover image! We are talking about none other than the power-packed couple, Virushka. (Also Read: Virat Kohli And Anushka Sharma's Home Has A View To Die For, Virat Shares A Selfie From His Balcony)

Anushka Sharma and Virat Kohli had always been tight-lipped about their relationship before their marriage. They were spotted together most of the times before their nuptial bond. Be it at airports or parties, they have never revealed much about their pre-marriage relationship, except for Virat taking powerful stands and appreciating the work of his lady when need be. 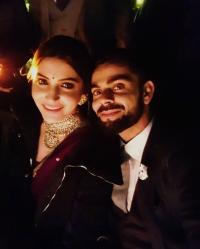 But, recently the couple has been quite vocal about their relationship in public by regularly posting pictures of the duo. To add to it, videos of their PDA has been going viral. Reportedly, Anushka has taken some time off from her work and flown in to Bangalore to spend some time with her hubby and cheer him for his matches. After Virat scored a catch at the Chinnaswamy Stadium yesterday , Anushka Sharma was seen blowing an affectionate flying kiss to her hubby. (Don't Miss: Irfan Pathan Announced The Name Of His Newborn Son And Won Heart Of Every Indian)

Catch a glance of Anushka’s ‘I knew it!’ reaction from yesterday’s match when Virat had another win:

And yet another video when Virat had a two-minute break from his match and couldn’t wait for the match to get over to see his darling wife. Watch how he is gesturing his dear wifey to see him:

What we could not miss, is the way he takes a glance of his wife after a catch and passes a smile as he gears for his next victory. See for yourself:

Anushka mostly makes it a point to visit her hubby when he is playing for Bangalore (and in Bangalore city) and for international matches as well when it is scheduled in his home country. (Don't Miss: Anushka Sharma's Father Has The Best Gift For His 'Beti' And 'Damaad' Virat Kohli)

There were many times when Anushka had been blamed for India’s loss and Virat has time-and-again proved, how good a partner he is, by firmly standing up against such trolls and sharing how Anushka Sharma is the source of his motivation and support. In an interview, Virat shared, “People who contribute off the field they deserve a lot of credit as well. My wife who keeps me motivated deserves a lot of credit. She's been criticised a lot in the past. But she's one person who's kept me going throughout the tour”.

We agree and respect you Virat and Anushka for always standing up and supporting each other. Keep your love intact so that we get to see more such PDA and go ‘awww’ over them!