Anushka Sharma flaunts her baby bump and pregnancy glow as she wears her hubby, Virat Kohli's team, RCB's colour to cheer for him from the stands. Pictures inside!

After 3 years of their married life, Virat Kohli and Anushka Sharma had surprised their fans with their pregnancy announcement. The couple is all set to take their relationship to the next level and step into the best phase of marriage, i.e., parenthood. Announcing the news of Anushka’s pregnancy, the couple had shared the first picture of parents-to-be, where the actress had flaunted her cute baby bump. Revealing that junior Sharma-Kohli will arrive in 2021, Anushka and Virat had captioned it as “And then, we were three! Arriving Jan 2021.” Since then, Anushka’s little glimpses make us gush over her. (Also Read: Priyanka Chopra Jonas Reveals Why She Was Not Comfortable With The Idea Of Her Marriage)

As Virat Kohli’s team, RCB was playing in IPL 2020 in Dubai, Anushka has accompanied her hubby and was often spotted in the stand cheering for him. While initially Anushka was criticised for Virat’s poor performance in a match, later, people could not stop looking at her baby bump and pregnancy glow. For instance, on October 10, 2020, the gorgeous mommy-to-be, Anushka was seen cheering for her darling hubby, Virat during the Royal Challengers Bangalore vs Chennai Super Kings IPL 2020 match. Virat had scored an unbeaten 90 in the match, and Anushka had shown off her proud wifey smile, showering him with flying kisses. Her baby bump had become the highlight of the match along with Virat’s outstanding performance. 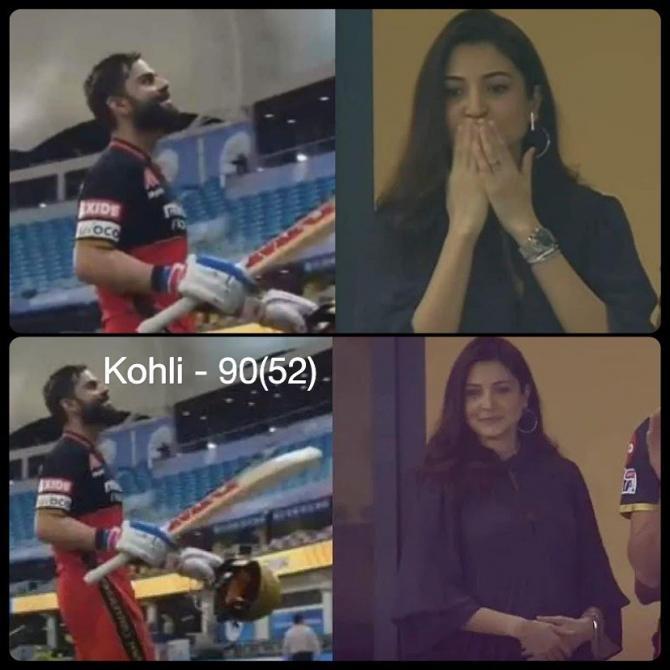 It was RCB vs SRH on November 6, 2020, and to support her hubby, like always, Anushka Sharma visited the stadium. From the stands, Anushka was supporting her hubby and motivating him to perform his best. Despite RCB losing the matching, Anushka’s pregnancy glow and gorgeousness was unmissable. The mommy-to-be looked gorgeous in a red turtle neck dress. Keeping her tresses loose, she accentuated her look with hoop earrings, a golden watch, golden bracelet and a kaala dhaaga tied around her wrist. Her baby bump and chubby cheeks added to her pregnancy glow. Take a look: 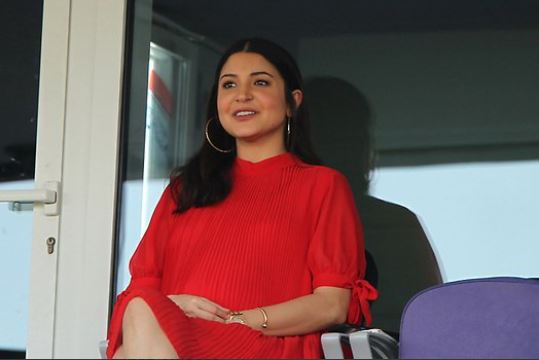 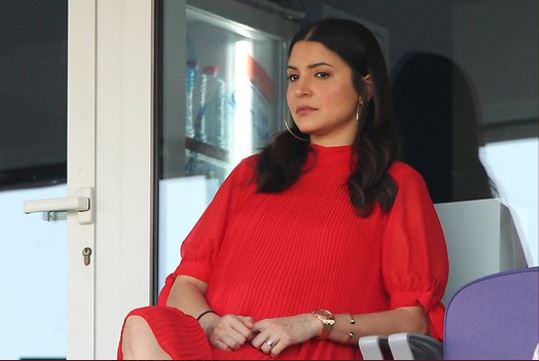 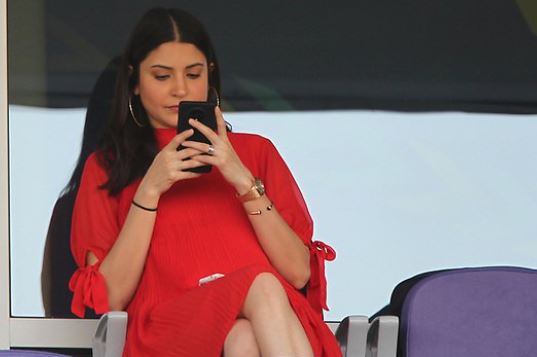 Anushka’s maternity dresses are a hit on social media as she is often spotted in the stands supporting her hubby. On November 2, 2020, Anushka was spotted in the stands during RCB v/s DC match, cheering for her husband, Virat Kohli, and we have to say, the actress had looked like a fairy from the wonderland in a white dress. Anushka's flowing white coloured middy was one of her best pregnancy looks. The gorgeous actress had kept her makeup minimal and had looked elegant with her sleek tresses flowing all over the place. (Recommended Read: Kajal Aggarwal Packs Her Bags And Leaves For Honeymoon With Her Hubby, Gautam Kitchlu [Pictures]) It was Virat Kohli's birthday on November 5, 2020, as the star cricketer had turned 32, his birthday celebrations were a little extra this time. The soon going-to-be-daddy had celebrated his birthday in Dubai with his beautiful wife. We had stumbled upon videos and pictures of Virat Kohli's pre-birthday bash. His pre-birthday celebration had taken place on a yacht in Dubai with his beautiful wife, Anushka Sharma and RCB teammates. Virat was seen cutting the cake with his gorgeous wife standing beside him. Virat's adorable gesture of feeding his wife the first piece of cake and lovingly kissing her on the forehead had won our hearts. Anushka had glowed in a printed, strappy frilled dress for her hubby's birthday celebrations.

To wish her darling hubby, Anushka Sharma had shared cutesy pictures of the gorgeous couple twining and slaying in black post-Virat's birthday celebrations. The expecting mommy had donned a black flowy dress, with quarter sleeves having embroidered detailing, and had paired it with hoops, minimal makeup with dark lips and her sleek tresses flowing. The handsome hunk, Virat Kohli was seen in his signature all-black look. Together, the duo had looked like a sight to behold. In the first picture, Anushka could be seen lovingly hugging her hubby, while in the second picture, we could see her planting a peck of love on his cheeks. (Recommended Read: Mira Rajput Kapoor Flirts With Hubby, Shahid Kapoor Over This Look, Brother, Ishaan Khatter Joins In) 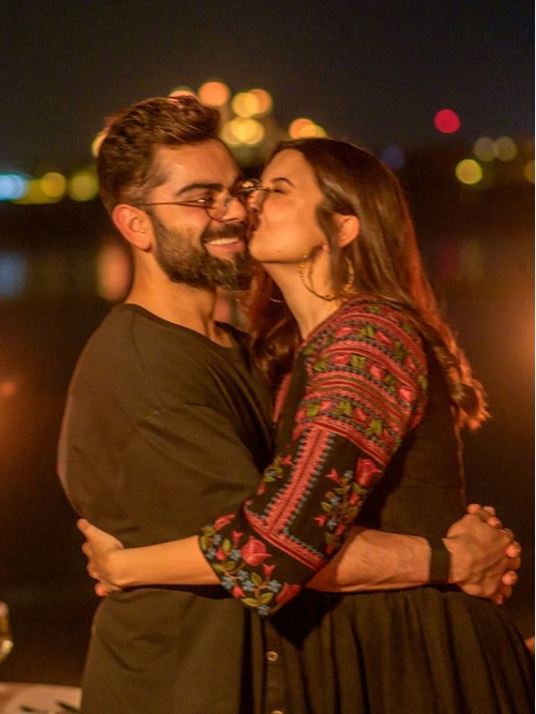 Anushka Sharma is setting the right maternity fashion example for every mommy-to-be!