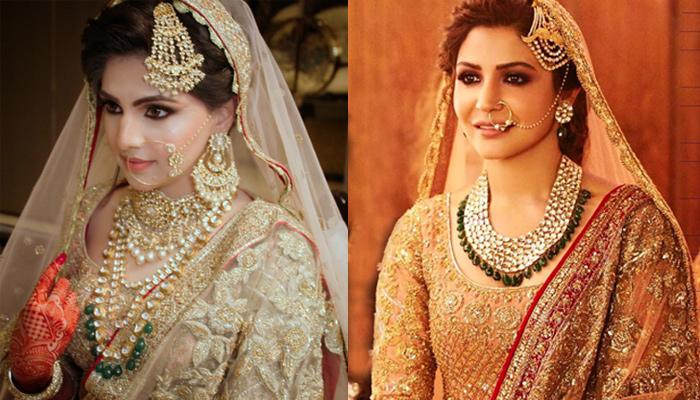 Karan Johar’s Ae Dil Hai Mushkil was one of the knockout films of 2016. Ever since the trailer was released, the fashion lovers were not able to take their eyes off from the amazing styling done in the movie. And if we were to pick the favourite, Anushka’s bridal look is definitely the winner! Renowned fashion designer Manish Malhotra redefined bridal fashion with this fabulous outfit. The cultural direction of what a Muslim girl would opt for in her bridal lehenga was kept in mind by the designer and the traditional highlight came with the interesting play of colours.

Recently, a Muslim bride recreated Anushka’s bridal look from the movie and we are enthralled by her elegance. From the make-up to the same outfit and jewellery, bride Farhat managed to spark in her wedding look. Let’s take a sneak peek to the bridal look of Farhat.

In Anushka’s bridal make-up, the artist highlighted her eyes and the make-up was nude with minimal touch ups. The best thing about her make-up is that it’s not too loud and still it looks the best. Apart from the minimal entire make up, just the kajal is doing all the work for actress.

Farhat’s make-up artist, @amritkaur_artistry, made sure to carry the similar nude makeup for the bride and making her look flawless with the heavy smokey eye make-up.

And as the bridal lehenga is too heavy, the hair style is kept simple with just a loose bun and braid look in front. 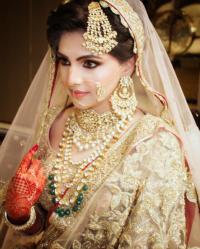 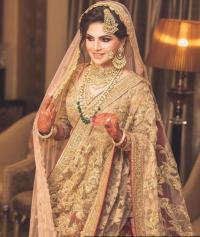 First thing noticed in a Muslim bride is her jewellery, specially the jhoomar. The jhoomar gave Anushka’s look an extra spark, apart from the other subtle choices of the jewellery. Anushka is wearing a lovely kundan necklace with green droppings, matching kundan earrings and in the nose, she is wearing a light polki nath.

Farhat managed to carry the entire well-balanced look with jewellery that’s neither too heavy and nor too light. Also for her, the most important element that completed her bridal look perfectly, is the jhoomar, again just like Anushka! 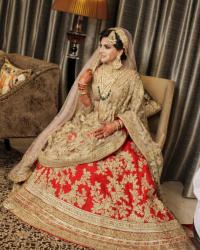 In an interview with Vogue, Manish Malhotra spoke about the bridal outfit of Anushka. Here’s what he had to say about his creation:

“For her bridal look, we kept in mind the cultural direction giving her a long-trail dupatta with bold accents of red, interplayed with muted hues of salmon, pink and peach. While the former is the traditional highlight, the modernity comes through in the interesting play of colours. The thread work on the outfit gives it a certain old-world charm, reminiscent of Lucknow’s noble past. I’ve kept the jewellery minimal, so that it subtly accents the whole look. I love all the looks from the film, but my favourite is Anushka’s bridal outfit. It’s one of my most glamorous pieces.”

Farhat too, looked gorgeous in the heavily designed choli with the dupatta carried in a long-trail style. Farhat took two dupattas - one with a self-lace in gold and another, a sheer veil. And, the talented designer who recreated this outfit look for Farhat is @mireyasanya. 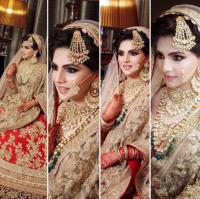 Also, take a look at what Anushka said about her experience of shooting in a 17 kg heavy lehenga for 4 days.

To which she captioned;

Well, now who says that only a Manish Malhotra or Sabyasachi lehenga can make you look royal on your on your wedding day! On her wedding day, Frahat looked spectacular, don't you think so? Share with us your comments on this recreation of Anushka's bridal look.

NEXT READ: 17 Different Kinds Of Indian Bridal Looks That Would Leave You Mesmerised