Anupam Kher updates his fans about his mother, Dulari, brother, Raju and other family member's health, who are fighting against the wicked Coronavirus. Details inside! 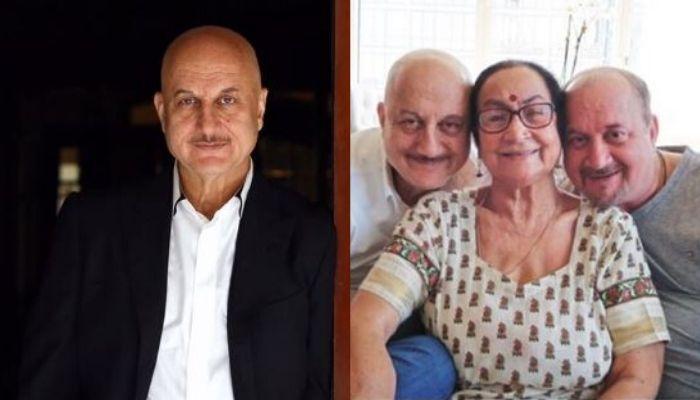 The COVID-19 pandemic has shown its vicious side in Mumbai and Delhi with the rapid rise in cases. Just when we thought that the affluent families will not be severely affected by the virus, we got a series of bad news coming our way. From the Bachchan family, Kher family to many others, celebrities had come forward last week to inform being affected by the virus. Everyday, millions of fans are praying for the well-being of their favourite celebrities affected by the virus. Anupam Kher has been constantly updating his fans about the health of his family members. (Also Read: Geeta Phogat Shares A Video Of Son, Arjun Climbing On His Father, Pawan To Get 'Amrood' From Him)

Anupam Kher had taken to his IG handle on July 12, 2020, to inform that his mother, Dulari, his brother, Raju Kher, Raju's wife and daughter are found having mild COVID-19 symptoms. Excerpts of his message could be read as "COVID and my family. I would like to inform friends, well-wishers and everyone else that I had taken my mother for a check-up yesterday, as she had been experiencing loss of appetite. On doctor's recommendation, we took her for CT Scan to rule out any medical issue. Upon testing, she was found mildly Covid+. Owing to her age, we have admitted her into Kokilaben Hospital. She is doing fine. Three other members (my brother, his wife and my niece) have also tested mildly positive."

As we said, Anupam Kher has been constantly updating his fans about the health of his mother, brother and sister-in-law. Now, after a while comes a good news from the Kher family as Anupam took to his IG handle to share that his family is recovering from the virus. He shared that his mother is better than before and same is the condition of other family members. Sharing a picture of his mother, he wrote, “Mom is better than before. So are Raju, Reema and Vrinda. God is kind!! #JaiShriRam #Mother #Dulari #OldPic @rajukherofficial @kherreema @vrindakher.”

Earlier, Anupam Kher had also mentioned in his video that he had tested negative for COVID-19, and his family is now quarantining in the home. His message could be further read as "I got myself tested as well, and I have tested negative. The family has self-quarantined themselves, and we have informed the BMC. I would like to reach out to everyone with aged parents - please get your parents tested even if they show the slightest of symptoms. Despite the extreme amount of carefulness displayed by my brother and his family over the last few months, they still tested positive. So I urge everyone to take this seriously and understand that no amount of safety measures are enough. Friends, don't let your guards down. Let's be vigilant, let's be aware and let's fight the bad times together. #stayhome #staysafe #DulariWillStillRock @rajukherofficial @kherreema @vrindakher." (Recommended Read: Dipika Kakar Gives Glimpse Of How Her Future Will Be With Hubby, Shoaib Ibrahim, Posts Throwback Pic)

On July 14, 2020, Anupam Kher had taken to his Instagram handle and had shared a video talking about the condition of his mother, Dulari and other family members. The actor had stressed on the fact that it's necessary to talk about the hard things that you're going through in your life. Along with the video, Anupam Kher had written a caption in which he had given an update on his mother, Dulari's health and it could be read as "Felt like Sharing with you what I am feeling these days. Mom is trying to be her spirited self in the hospital, although she is not feeling hungry. Raju, Reema & Vrinda are home quarantined. Parents are so selfless. One must verbally tell them again and again that you love them. For them and for your own self! #DulariRocks #Love #Selfless #Parents #RandomThoughts." (Don't Miss: Rubina Dilaik Enjoys Performing 'Pahadi' Dance With Her Family, Shares A Video From Her Family Time)

We pray for the speedy recovery of the Kher family!