Sushant Singh Rajput's ex-girlfriend, Ankita Lokhande posted a video of him paragliding from one of their vacations together, and it just takes our heart away! If you observe keenly, social media is flooded with Sushant Singh Rajput's memoirs. Almost every other day unseen pictures and videos of Sushant's lively, jovial personality surface online and douse us in his memories only to snap out of it in a moment and realise that he is no longer with us!  It seems we still haven't come to terms of his absence. (Recommended Read: Shweta Bachchan's Post For Dad, Amitabh Bachchan Is All About Having An Inspiration Throughout Life)

Sushant Singh Rajput's ex-girlfriend, Ankita Lokhande posted a video of him paragliding from one of their vacations together, and it just takes our heart away! Ankita reposted the video, which was originally posted on one of her friend's IG handle with a heart-wrenching poem about Sushant. The highlight of the beautiful video is the smile on Sushant's face and Ankita cheering for him as he flies. Scroll down to check it out! 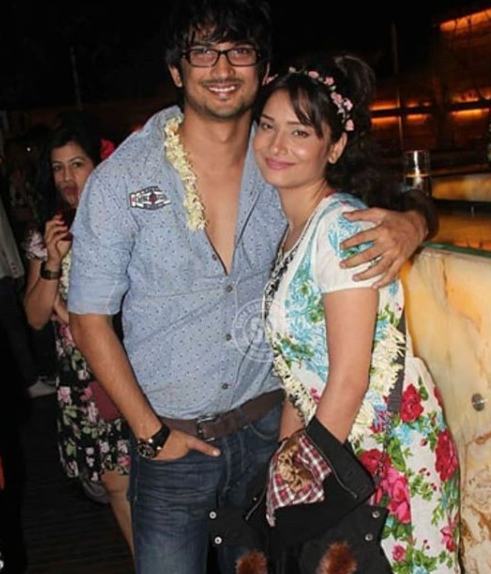 On August 31, 2020, Ankita Lokhande had shared some beautiful snaps of her in a pink saree with a cryptic post and had talked about 'power of women'. Her caption could be read as "Ladkiya choti choti baaton per ro deti hai Per life ki badi se badi mushkil haste haste Handle kar leti hai. #powerofwomen." Ankita's post had come after Rhea's allegations on her that she was garnering publicity over Sushant's death by behaving like his widow.  (Also Read: Karanvir Bohra's Wife And Soon-To-Be Mommy, Teejay Clarifies That They Are Not Trying For A Baby Boy) 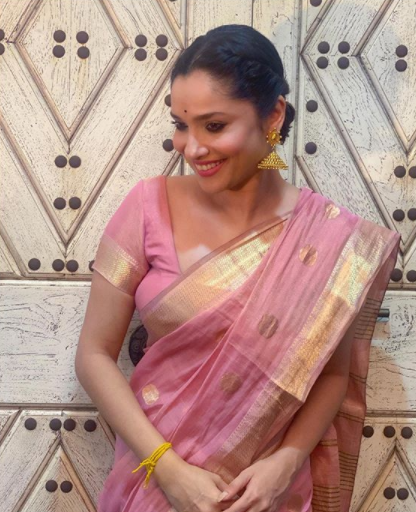 Before that, on August 28, 2020, Ankita Lokhande had released a statement in which she had cleared her take and had said she is standing with Sushant's family and will fight until the end. Excerpts of her statement could be read as "Certain clarifications: 1st of all from begining till the end me and Sushant were together about 23rd February 2016. He never had any conditions of depression and had visited any psychiatrist. He was totally fine." Ankita had captioned her post as "Few Revelations on today.. Follows #ITWILLCONTINUETILLWEGETJUSTICE." 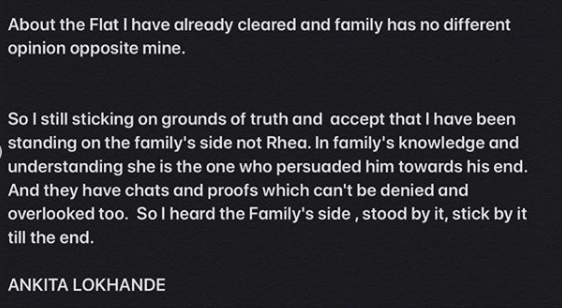 Needless to say, Ankita Lokhande shares a great rapport with Sushant's family. A glimpse of which we had seen when Ankita had blessed Sushant’s nephew, Nirvanh on his first day at school. Sushant's sister, Shweta Singh Kirti had shared a collage of her son from his first day at school in the US. As a happy and proud parent, Shweta had captioned the picture as “Bring It On! First Day of School for this little munchkin! Blessings." On the picture, Ankita Lokhande had shared her blessings for the little boy, and had written, “Awwwwww nirvanu lots of blessings to u" followed by hearts and hug emoticons. (Don't Miss: Gauri Khan Shares Glimpses Of Her Collection, But We Are Eyeing On Shah Rukh's Miniature Behind Her) What are your thoughts on Ankita's equation with Sushant's family? Share with us! Sushant Singh Rajput's death has triggered a lot of concerns, questions and debates. Amongst these, there's a sister, who is leaving no stone unturned to fight for justice and there's a friend who is making sure to fulfill Sushant's dreams! Yes, we are talking about Shweta Singh Kirti and Sushant's