Shweta Bachchan's Post For Dad, Amitabh Bachchan Is All About Having An Inspiration Throughout Life

Shweta Bachchan's Post For Dad, Amitabh Bachchan Is All About Having An Inspiration Throughout Life

Shweta Bachchan Nanda dotes on her father, Amitabh Bachchan. On September 1, 2020, the loving daughter shared a post for Amit 'ji' and it melted our hearts. 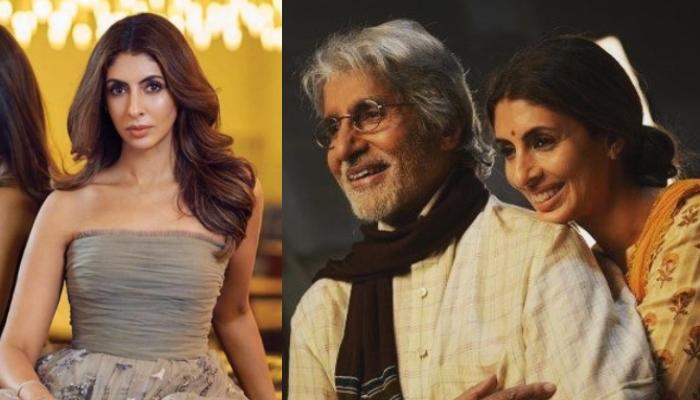 For a daughter, her father is always the first man who, loves her unconditionally and inspires her to chase her dreams. He always wishes to give her the best and stands like a pillar of strength for her. Whether it is about choosing the right career or the right partner, she believes no one, but her father. He cheers the loudest on all her achievements and still makes sure that she is grounded. Such a beautiful relationship is shared between Bollywood’s Shahenshah, Amitabh Bachchan, and his daughter, Shweta Bachchan Nanda. (Also Read: Karanvir Bohra's Wife And Soon-To-Be Mommy, Teejay Clarifies That They Are Not Trying For A Baby Boy)

Like every daughter, Shweta Bachchan Nanda shares a warm rapport with her father, Amitabh Bachchan and Amit ji too has always been proud of her achievements. From launching her fashion line to her novel, Paradise Towers becoming the bestseller in India, Amitabh Bachchan has acknowledged that his daughter has always made him proud. At Karan Johar’s talk show, Koffee With Karan season 6, Abhishek had confessed that his father is more fond of Shweta as compared to him. The brother-sister duo had always fought for, who is their father’s favourite child.

On September 1, 2020, Shweta Bachchan Nanda took to her IG handle and shared a post for her dad, Amitabh Bachchan. She shared a mural of her father, Amitabh Bachchan’s iconic character from the 1975 film, Deewar. Shweta shared the picture of the building and wrote, “B for (my)Beacon.” On her post, her brother, Abhishek Bachchan commented with raised hands emoticon expressing his joy and pride.

Shweta Bachchan Nanda loves sharing adorable pictures and heart-melting captions for her father and February 4, 2020, was no different. Shweta had taken to her Instagram handle and had shared a candid picture of herself with her father, Amit ji from Armaan Jain’s wedding. The father-daughter duo had looked royal in their traditional ensembles and had complemented each other. Shweta had captioned the picture as “Always”. (Also Read: Gauri Khan Shares Glimpses Of Her Collection, But We Are Eyeing On Shah Rukh's Miniature Behind Her)

Shweta Bachchan dotes on her father and her social media handle is proof of the same. Some months back, Shweta had shared a throwback monochrome picture of her in her father’s arms. It was her caption that had melted our hearts. Along with the adorable picture, Shweta had written, “Home is not a place, it is a person.” Similarly, on Amit ji’s birthday last year, Shweta had shared a beautiful picture of the father-daughter duo and had penned an adorable wish for him which could be read as “When you get to the top of the mountain, keep climbing- Happy Birthday Papa I love you endlessly” followed by a heart emoticon.

Shweta Bachchan Nanda has always been vocal about the love she shares with her father and also how she feels about being the daughter of the megastar. On March 24, 2019, Amitabh Bachchan had shared a collaged throwback picture of himself and Shweta where they could be seen making similar facial expressions and had captioned it with a heartwarming note. He had written in Hindi which could be read as "Daughters are the best!! Badi pyaari hoti hai betiyaan, raaja hote bete to raajadulari hoti hain betiyaan, laaj hotee vo do do ghar ki mahakaatee ghar aangan vo phulavaari hoti hain, betiyaan pita kee aankhon ka taara, maan kee gudiya khuda kee inait banaaya, badi pyaari hoti hain betiyaan."

Amit ji always makes sure to praise his children’s efforts and achievements. In a media interaction, Big B had revealed Shweta’s qualities and had stated, “She really is the best actor in the family. She is also very perceptive about observations and I do rely on her many a times as just a rest of the family on many incidents that may happen within the city, home, country and world. She has an opinion. Many times, we discuss the outcome of a film that I may have done or a film that she may have seen. I have to say that she is always been right.” (Also Read: Genelia Deshmukh Opens Up On How Her Hubby, Riteish Deshmukh And Kids Helped Her To Fight COVID-19)

Do you also have an inspiration like Shweta? Let us know.

Grab a tissue, 'cz this one might just leave you in tears! In India, weddings are a beautiful blend of age-old traditions and ever-evolving trends. Amidst the crazy dance moves, wide grins and hearty laughs, the most emotional moment of the wedding comes when the bride has to bid farewell