Anita Dongre’s son, Yash Dongre got married to his longtime sweetheart, Benaisha in a three-day wedding celebration that went on from March 01-03, 2019 (in Mussoorie) and Anita had herself designed her daughter-in-law, Benaisha’s pink wedding lehenga! 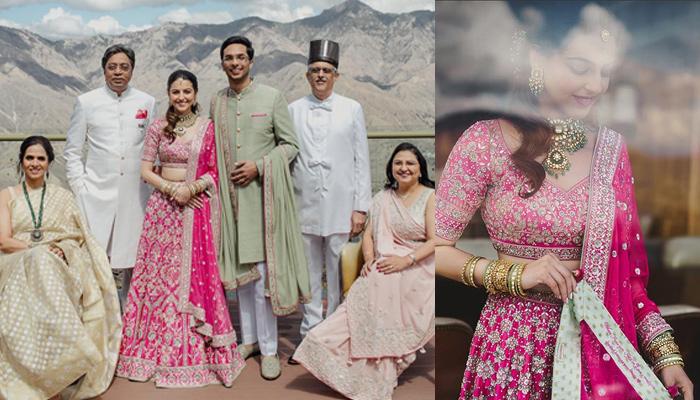 Weddings are fun and so are the celebrations! While others have the time of their life enjoying the pre-wedding and wedding festivities, it is the bride-to-be, who undergoes a zillion emotions. “How will my in-laws be? Will they be nice to me? Will my boyfriend be the same with me post marriage? Will I have to start waking up early? Do I have to take permission for everything?”- is what every bride-to-be thinks before her wedding. But one thing is certain for ace fashion designer, Anita Dongre’s daughter-in-law, Benaisha who did something extremely sweet for her on her wedding! (Do Read: Anisha Padukone Gives Brother-In-Law, Ranveer Singh The Tag Of 'The Coolest Jiju Ever')

Anita Dongre’s son, Yash Dongre got married to his longtime sweetheart, Benaisha in Mussoorie in a three-day wedding celebration that went on from March 01-03, 2019, followed by a reception in Mumbai on March 09, 2019. However, the couple had registered their marriage on February 25, 2019 in Mumbai. Sharing a beautiful picture from their jaimala, Yash took to Instagram and wrote, “Couldn’t be happier to be calling my best friend of 10 years my wife ! I love you Benaisha & so looking forward to embarking on this amazing new journey with you ! #ittook10.” But you know what was stunning? Anita Dongre had herself designed her daughter-in-law, Benaisha’s pink wedding lehenga!

Anita Dongre shared a beautiful family picture of the same and wrote, “Every wedding I’ve designed for has held a place in my heart. Today, I’d like to share with you a glimpse into a very special occasion; the wedding celebrations of my son Yash with his sweetheart, Benaisha. For us, it was a no-brainer to choose a wedding destination that paid homage to India’s untapped beauty. We zeroed in on Mussoorie for the couple to be married amidst nature, embraced by lush forests and with a backdrop of the Himalayas. Join me in wishing them the best of love as they begin their new journey together”.

Anita Dongre also shared her daughter-in-law's preferences about her wedding dress, "The blushing bride always wanted to get married in pink. Her gota patti lehenga was handcrafted in Rajasthan, with Benaisha’s favourite quote embroidered into the dupatta. When I saw you I fell in love, and you smiled because you knew. Benaisha’s fondness for inspirational quotes was also curated into the wedding décor".

Recalling his love story with the Humans of Bombay, Yash Dongre stated,“My best friend introduced us over a conference call. I was a shy guy, while she’d come on the cover of Seventeen, so I was already smitten! When she wished me on FB on my birthday, we started talking & hit it off! We spoke about everything under the sun till 5am every night! She talked & I listened. She asked & answered her own questions! 2 weeks later, I drunk called her saying ‘I think I like you.’ Thankfully, she felt the same & we went on our first date! It was a roller coaster after.  The down parts of the ride were majorly my doing. I was left scarred–I thought if my ex could hurt me, she’d too. In fact, after a few months, she messaged saying ‘I love you,’ I replied with ‘thanks, I’ll tell you when I feel the same’ I was that cautious.” (Must Read: Janhvi Kapoor Cuddles Big Sister, Sonam Kapoor Ahuja After Receiving Award, Both Look Resplendent)

Yash Dongre further wrote, “Unfortunately, because of these insecurities, I hurt her. But she never gave up on me. Even when it got ugly. 5 years later, I went to Boston to study. But we hadn’t fixed our issues so we became distant. When I returned, things reached to a point where we broke up. That’s when our relationship was really tested. We were apart for almost 2 years. She was in another serious relationship & I realised that I couldn’t be with anyone else! She later said that she had prayed to God asking, If I was meant for her– then to let the other guy go. I guess God listened, because her ex broke up with her & that’s when I told her I wanted her back. She got her sign & finally gave me a chance!”

Yash Dongre concluded his love story with, “She came to visit me in NYC & things fell into place. It was a fresh start, a clean slate. It felt good to know that this was long term. It was going to be our 10th anniversary of knowing each other this year. I knew she expected a proposal. Or she’d only propose! So I planned it better. A few days before that date, I took her to a secret spot in Malibu & stopped her for a photo. I twirled her, got down on my knee & asked her to marry me. She responded saying ‘are you sure?’ Of course I was– she’s always been the one! So that’s how it took 10 years, of heartbreak, fights, chocolates & beautiful trips to get us to this point. But now that we’re here, none of that other stuff matters… forever’s looking great!” #ItTook10 #HoBLoveStories”. (Also Read: Deepika Padukone Wants Ranveer Singh To Come Home On Time, Reveals The Real Reason Behind It)

Isn’t it amazing? Guys, why don’t you share your love story with us? We await!