Anas Rashid and his baby girl, Aayat wished everyone, 'Chand Mubarak' on the occasion of Eid yesterday (June 05, 2019). Anas Rashid got married to Heena Iqbal in 2017 in an arranged marriage set up. 38-year-old television actor, Anas Rashid has been away from the small screen for quite some time owing to his family and recent marriage. He was last seen in the hit TV soap opera, Diya Aur Baati Hum in 2016. He got married to Heena Iqbal, who is 14 years younger than him, in an arranged marriage set up in the year 2017 and since then, has been taking on his familial responsibilities like a pro and giving us major #maritalgoals. (You May Like: Anushka Sharma Too Is In Awe Of Husband Virat Kohli's Candid Smiling Picture, Just Like His Fans)

Anas Rashid and Heena Iqbal were blessed with their first child, a baby girl on February 12, 2019. Anas had taken to his Instagram handle to announce the arrival of his little baby girl and had thanked his wife, Heena and his fans. In fact, along with his declaration, he had also shared the name of the new addition in their family- Aayat. 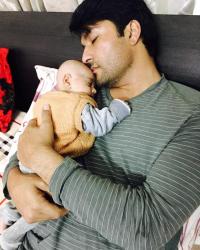 Anas Rashid, Heena Iqbal and their family celebrated Eid yesterday on June 05, 2019 just like millions of people across the world. Anas Rashid took to his Instagram handle to share an adorable father-daughter moment where we could spot the little cutesy quietly stationed on her papa’s lap. Anas captioned the following picture as, “Chand MUBARAK.” Take a look: 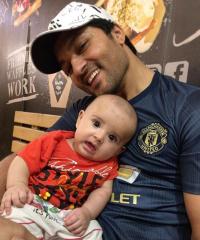 Anas Rashid, a day after Aayat was born, had taken to social media to post an adorable video where he had announced the arrival of his baby girl. Along with the video, he had written, “Hi dear ones, We are blessed with a baby girl yesterday. Both mother and baby are in good health. Thank you all for your blessings and wishes. Anas Rashid.”

Earlier in an interview with Pinkvilla, Anas had shared the details of meeting his life-partner, Heena for the first time. Sharing details of his mother’s choice, he had said, “Well, I heard about her from Ammi (mom) and rest of the family members 10 days back. I met her a week ago. I never thought about it. I knew that whatever Ammi would decide, I would say yes to it. I took me a minute to say yes to her but in practicality, it happened in a week's time.” 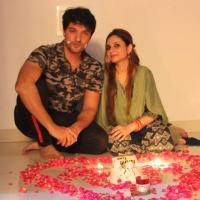 Upon being asked about his belief in the institution of marriage, Anas had stated, “As a teen, I believed in love marriages and thought I would marry in a romantic fashion. But with time and as I experienced life, I felt that arranged marriage would be best for my family and me. It is also good for a girl, I feel.” (Must Read: Tony Kakkar Wishes His 'Star' Sister Neha Kakkar On Her 31st Birthday, Calls Her Special Than Coffee)

Anas Rashid, in another interview, had shared about his feelings on the D-day, “Everyone kept complimenting us how great we looked together. Our wedding attire also received a lot of appreciation and we were blushing because of the praises. Being the eldest in the house, I was so elated to see my family happy. It was a feeling that I can’t even describe in words. I was nervous, happy, restless and what not. It was the best day of my life for sure.” 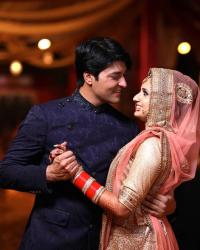 Anas Rashid had also talked about Heena Iqbal being a part of their family. He was quoted as saying, “It doesn’t seem that she is new in the family. Heena has already won over everyone and she has seamlessly blended with the family. Everyone loves and adores her and she too has been reciprocating it with equal love. As of now, she hasn’t cooked anything but my mother and sisters are helping her in understanding these things.” 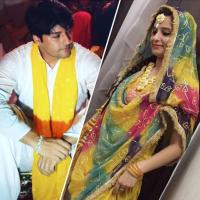 In another interview with the Bombay Times, Anas had talked about his married life and had stated, “I feel content and complete. During the wedding, Heena's friends asked me how it feels to be married in real life after tying the knot on-screen. I said I had the liberty to take a break whenever I was tired in reel life, but in real life, there is no action or cut (laughs).” (Also Read: Geeta Phogat's Sister Babita Phogat To Marry Fellow Wrestler, Gets Engaged And Make It Official) 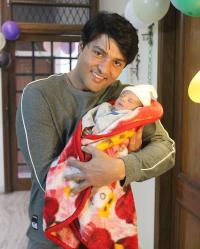 Anas Rashid’s Eid picture with his baby girl, Aayat is too adorable to be expressed in words, right?