Kartik Aaryan is doing a film each with both of his rumoured girlfriends, Sara Ali Khan and Ananya Panday. Ananya reveals with whom Kartik looks the best.

Gone are the days when one would say that girls don’t take the first move. We rightfully do so and love being the first one! It was on the fifth episode on Karan Johar’s hit chat show, Koffee With Karan season 6 when Sara Ali Khan made her first-ever on-screen debut along with her superstar dad, Saif Ali Khan. And it was in front of the world when the newbie superstar-in-the-making expressed her liking towards Pyaar Ka Punchnama actor, Kartik Aaryan. When the world is mostly about maintaining a ‘good friends’ stance, Sara Ali Khan had already made a huge fan following that day even without entering the film domain. (Do Read: Neetu Kapoor's Mother Used To Send Her Cousin Along On Dinner Dates With Then BF, Rishi Kapoor)

What followed was Sara Ali Khan turning tomato red whenever she was asked about Kartik Aaryan and would cull out a naughty smile whenever asked about him. And we can never forget Kartik Aaryan’s blush when he was told about Sara's confession at the Lux Golden Rose Awards in 2018. As much as we prayed for their togetherness soon, bang came in rumours of an alleged relationship brewing between him and newbie star kid, Ananya Panday. Kartik is doing a film each with both of his rumoured girlfriends (Aaj Kal with Sara and Pati Patni Aur Woh with Ananya). While their multitudinous fan pages keep on voting about who should Kartik date, Ananya has an answer on the same. 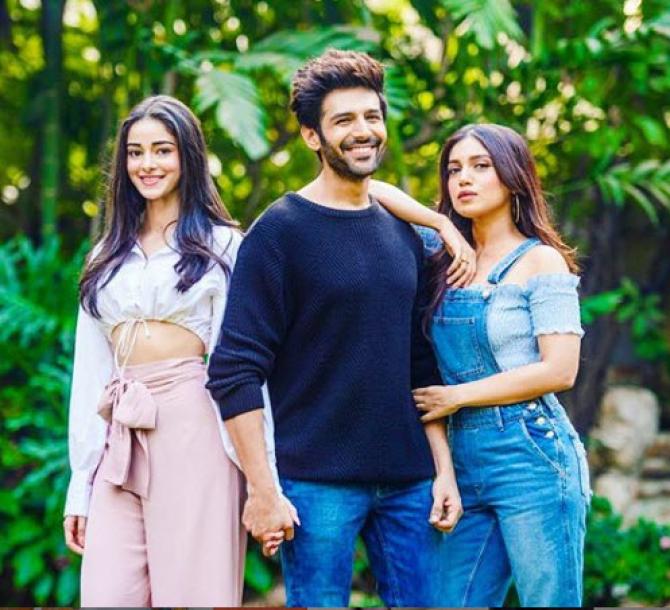 In a recent interview with BollywoodLife, Ananya Panday was asked if dating rumours and votes pertaining to whom Kartik Aaryan looks better with (Sara or Ananya) annoys her. To which, Ananya shared, "No ya, I think he looks good with everyone. He is such a good looking guy. So yeah, it's cute. (But) who's voting for who? I'm not checking.” Ananya also talked about working with her rumoured beau, Kartik. She shared, "We shot three days in February, that was one short schedule that we did. But I’m going to Lucknow and I’m going for two months so, I’m super excited. I shot with him, I didn’t get a chance to shoot with Bhumi yet. But he is such a good actor, his command over the language is amazing so he improvises really well. And such a selfless actor, he thinks about how to make the scene better rather than just his own lines. Also, he is just fun to be around, just makes me laugh all the time." A couple of ‘honeymoon kinda’ pictures of Sara Ali Khan and Kartik Aaryan had emerged on the internet which are the BTS of their film’s shoot. While we can totally spot Cupid all set to hit the duo with his sharpest love arrow, a Filmfare report that came a few days back, suggested that the Kartik’s rumoured girlfriend, Ananya is not too happy with Sara and Kartik’s closeness. Throwing light on the same, a source had revealed to the portal, “Sara and Kartik have got quite close to each other over the last few months and this has not been easy for Ananya as her relationship with him has just started. The two have been going through a rough phase as she does not approve of this growing friendship between Sara and him. Ananya has already tried to clear her issues with Kartik and they are trying their best to make it work.” 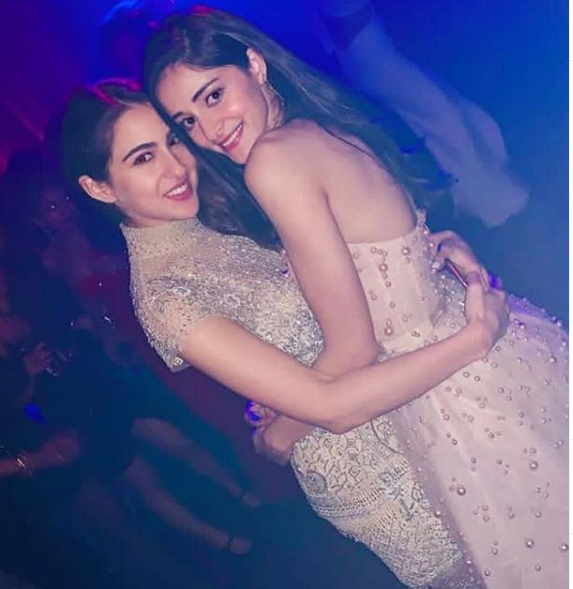 Kartik Aaryan and Ananya Panday’s dating rumours had started doing the rounds when they were spotted in the car, coming out of a dinner date. While Kartik rubbished all linkup rumours with Ananya by saying, “People say all sorts of things if we have lunch or dinner together. It was just one dinner. I find it strange to read such things about myself”, Sara Ali Khan had an unmissable reaction on her crush’s dating rumours. (Must Read: Rohit Roy's Wife, Manasi Joshi Has A Special Message For Him And His Upcoming Show, 'Sanjivani')

In an interaction on Famously Filmfare, the Kedarnath actress was quoted as saying, “I find Kartik cute. It's a Sara-Sara thing. So how does it matter if he finds some other person whose name starts and ends with A? That's good for him.” At yet another interview, when Sara was asked to DM Kartik Aaryan for a date, she had said, “No, no, no... how much! I have said it everywhere. Itna bhi desparate nahi. Mom said you must wait. So, I am waiting!” 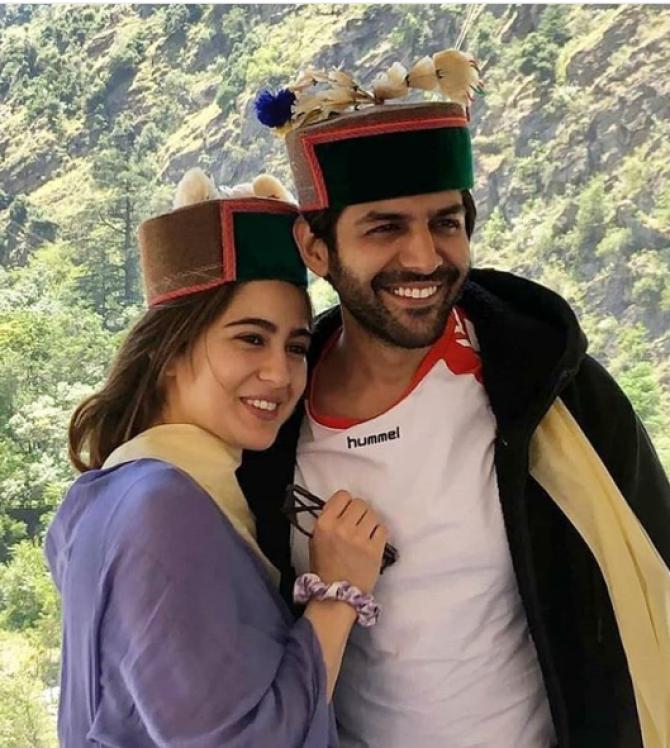 In an interaction with Anupama Chopra, Kartik Aaryan had cleared the air surrounding his rumoured link-up with Ananya Panday. Speaking about the same, he had shared, “Right now, I’m concentrating on my work. I think, relationships they do take a lot of time.” (Also Read: Karisma Kapoor's 'Jija' Saif Ali Khan Had Gifted Something Lovely To Her On His Wedding With Kareena) 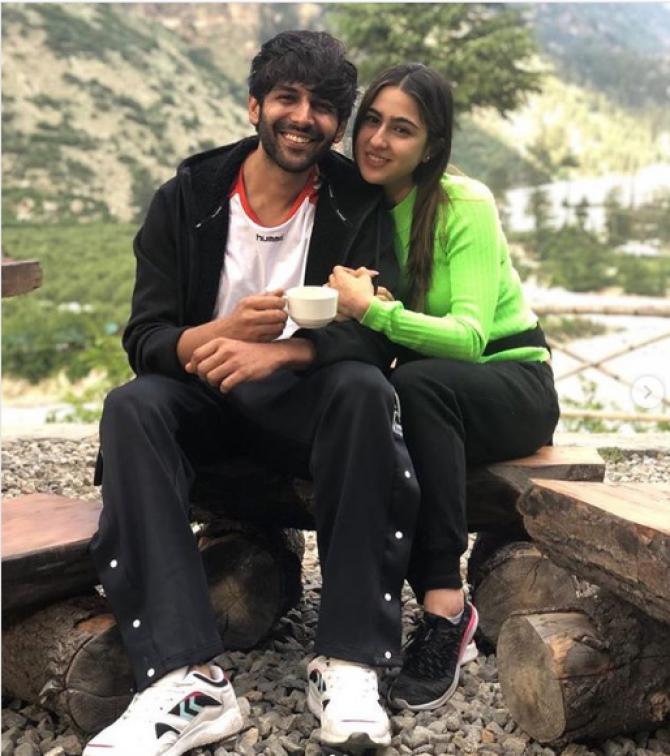 Kartik Aaryan had further added, “Mere andar phir guilt reh jata hai ki yaar main iss relationship main hoon (but) main time nahi de pa raha hoon. So, that is something I don’t want to do with the other person. That’s the reason I’m committed to my fans and work right now.” When he was quizzed about the pap culture and his pictures that created the headlines, Kartik had stated, “Even if I have gone out for a meeting, with the producer and the actress, then it is written about me and the co-star. Which is something I don’t get. Who logon ko maza aata hai likhne main, toh who likhte hain. Abhi kitna rok lunga?” Guys, which jodi do you vote for: Sara-Kartik or Ananya-Kartik? Let us know!