Anand Sonam Ahuja paid a surprise visit to his darling wife, Sonam Kapoor Ahuja on her sets, a day after her 34th birthday. The fashionista took to Instagram stories to share the same. Pic inside.

How do you like your every day to be? Phenomenal? We all would love to, right? And we guess that by now, you must have guessed which celebrity couple we are talking about. #EverydayPhenomenal has become synonymous with Sonam Kapoor Ahuja and Anand Sonam Ahuja. And of course, they have made sure to make their everyday ‘phenomenal’ in its purest form. Sonam and Anand, despite the fact that they are in a long-distance marriage, have shattered the stereotypes on the same and made us believe that, when there is love and respect for each other’s space, every relationship can be carried on happily. (Suggested Read: Rohit Suchanti Comments On Srishty Rode's Marriage With Another Man After Their Alleged Breakup)

Sonam Kapoor became Sonam Kapoor Ahuja on May 08, 2018, when she took the nuptial plunge with her beau, Anand Ahuja. And since then, from visiting and surprising each other, to having Skype conversations and eating their meals together, Sonam and Anand have redefined #maritalgoals. Recently, Sonam celebrated her birthday and her husband, Anand knew how to make it special for his ladylove by posting the most heartfelt birthday wish for her.

Sonam Kapoor Ahuja turned 34 on June 09, 2019, and from her friends to family members, they all made it memorable for her. But her husband, Anand Sonam Ahuja went an extra mile and guess what? He gave her a surprise visit on the sets, not on her birthday but a day after on June 10, 2019. Anand, who couldn’t be with Sonam on her 34th birthday owing to his professional commitments flew down to Mumbai to surprise his wife.

Sonam shared the same on Instagram stories and wrote, “Look who came to visit me on the sets,” atop it. What a doting hubby, isn’t he?

Anand Sonam Ahuja, on Sonam Kapoor Ahuja’s birthday, had taken to his Instagram handle and shared a couple of pictures from their reception ceremony last year. Wishing his darling wife, he had written, "#girlfriendforever #everydayphenomenal. Happy Birthday to my world".  Sonam had instantly replied to Anand’s post, "Love you the most in the world."

Sonam’s father, Anil Kapoor also had the sweetest birthday message for his doting daughter. He had tweeted, “Happy Birthday, @sonamakapoor! I can’t tell you how incredibly proud we are of you! You have grown into such an exemplary human being & all we can do is stare in awe & feel inspired. Just like every year, this too will be your year in new & exciting ways! Never change! Love you!” (Don't Miss: Khushi Kapoor Borrows Janhvi Kapoor's Dress For Sonam's Birthday Bash, We Wonder Who Wore It Better)

Happy Birthday, @sonamakapoor! I can't tell you how incredibly proud we are of you! You have grown into such an exemplary human being & all we can do is stare in awe & feel inspired. Just like every year, this too will be your year in new & exciting ways! Never change! Love you! pic.twitter.com/CrzOZJPbTg — Anil Kapoor (@AnilKapoor) June 9, 2019

Sonam’s sister, Rhea Kapoor had wished her elder sister by sharing the following picture on Instagram and writing, “Happy birthday sister, better half, muse, best friend. Can’t live without you.”

Coming back to Sonam and Anand, in an interview with the Filmfare, Anand had revealed how he and his wife make their long-distance marriage work. He had shared, “When it comes to marriage, small things matter a lot. We eat meals together, even if we are in different time zones, on Skype. We also actively make sure that we don’t go over two weeks without seeing each other.”

Anand Sonam Ahuja, in an interview with Elle India, had talked along the similar lines and had shared how it’s not that hard to be together even in a long-distance marriage. He was quoted as saying, “Long distance can get tiring, but we're lucky that Delhi, London and Mumbai are all home, for work. It could be worse, but it obviously could be better. It's hard to not be together, especially after you get around to being married and you want to have that time. But Sonam's got a hectic schedule this year — she's got four films coming up. But we make it work. We have certain tricks — for example, we always have a meal together over Skype.”

Sonam Kapoor Ahuja, after her wedding, had once commented on the whole idea of adding her husband’s surname to hers and how Anand was evolved enough to shatter the patriarchal concept. She had stated, "Anand and I had a very long conversation you know, and we obviously want to have kids eventually, and he had this one friend who had a very long name, his mother’s name, father’s name, blah blah blah. I said, see anyways it’s a patriarchal concept, I have my father’s last name, I don’t have my mother’s name, and I want to be part of your family as well, and he wanted to be a part of mine.”

Anand Sonam Ahuja had recalled in an interview the details of his first meeting with Sonam Kapoor Ahuja. He had shared, "The first time we met, we talked about our respective work. I was just struck by the fact that I could speak to her so openly about everything. We were chatting on Snapchat one night and she said, ‘Stop texting, just call me.’ And we spoke for two hours that night. Our friendship started over superficial things like vegan chocolates and sneakers but soon we were having deeper conversations." (You May Like: Esha Deol And Bharat Takhtani Become Parents Again, Give Their Second Child A Unique Indian Name)

Anand Sonam Ahuja’s gesture of a surprise visit to Sonam Kapoor Ahuja on her sets is every doting husband ever, right? Share your views! 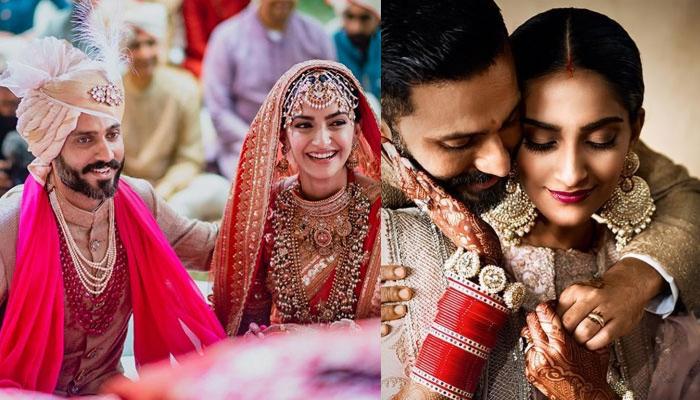 Time flies in a jiffy and we realise it later. And it happened yesterday on May 8, 2019, when everyone got to know that the masakali of the Indian film industry, Sonam Kapoor Ahuja completed one year of her marital bliss with long-time businessman beau, Anand S Ahuja. It was on