Sonam Kapoor posted a series of her old photoshoot pictures, and Anand’s replies on them were sassy, love-filled and about their quarantine. Scroll to have a look at their cute conversation! 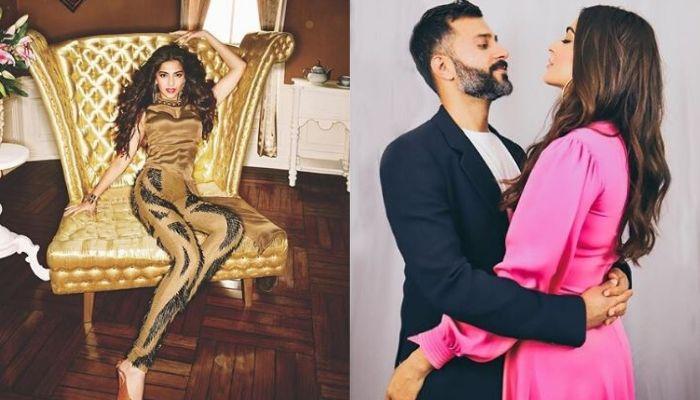 Sonam Kapoor and Anand Ahuja have been giving goals to millennials ever since the two had come out in open about their relationship. After all the speculations regarding their wedding, the two had taken the saat pheras on May 8, 2019, with a theme called #EverydayPhenomenal. The two have taught people to respect one another’s profession, support and empower each other and that is how it should be done. Not just this, the couple had set another milestone for youngsters as Anand Ahuja had added his wife’s name to his name, and is now, Anand S Ahuja, making every girl proud and giving some major lesson to every guy. However, this was just a stepping stone for their social media love and support. (Also Read: Shoaib Ibrahim And Dipika Kakar's Look Of Love Is All About Allah's Mercy And We Are All Hearts)

On May 4, 2020, Sonam Kapoor took to her Instagram handle to drive down her professional memory lane, sharing some fun pictures from her old photoshoot, but soon it was no more about the profession as Anand Ahuja made sure to be the husband of the millennium. Sonam posted 6 pictures back to back and pat came the reply of her husband, Anand and this got the fans more hooked to her pictures. While some of Anand’s replies were sassy, some were about love and some revealed Anand and Sonam’s quarantine details.

Talking about Sonam’s first picture, it was all about the pink fairytale, where Sonam can be seen lying on a pink fur couch. Her caption to the picture was all of us in quarantine as it can be read as “Lounging at home like..” But Anand had a better description to her picture as he wrote, “falling off the couch at home like ...” The second picture of Sonam was gold, as she was glittering on the golden couch, calling it her “Quarantine look 2” with a laughing emoticon. As her husband, Anand had a witty reply on her first picture, he balanced out this picture with a lovey-dovey reply, “Hahahah. What is this photoooo. Too good!!” In her third picture, Sonam can be seen lying on a brown velvet couch, wearing a red gown and indulging in a hearty phone conversation. She captioned the picture as “Always on the phone” with a cellphone emoticon. To which, Anand replied, “OMG.” followed by laughing and thundering emoticons. Take a look at their cute conversations and pictures below. 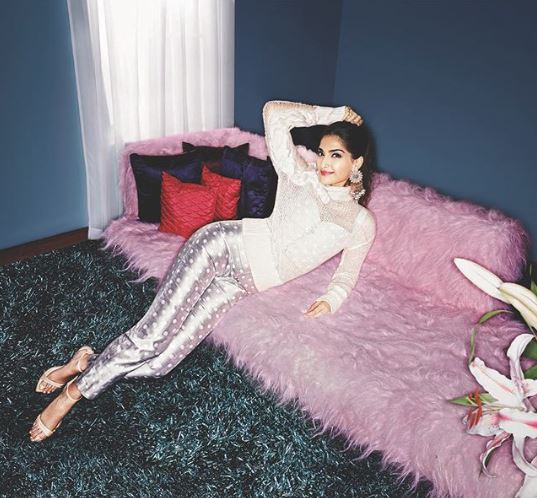 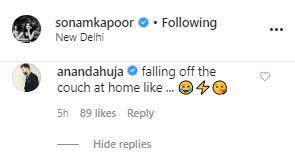 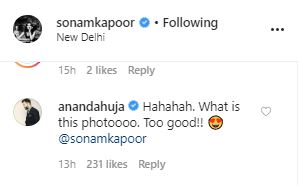 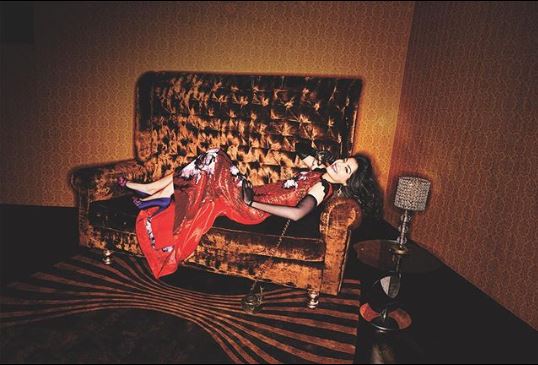 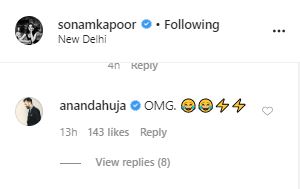 This did not stop there, as soon came the fourth picture of the series, where Sonam can be seen lying on a gold cover bed, wearing a black bodycon gown and her glowing smile. Her caption revealed her quarantine outfit as she wrote, “Pjs in bed? Not me...” followed by a laughing emoticon, but Anand was on his savage mode. Soon Anand disclosed the actual uniform Sonam has been maintaining through the lockdown phase, as he wrote, “SMH. But you’re in PJs (and kaftans) ALL the time!” Sonam’s fifth picture was again a golden affair, and she captioned it as “How at home shoots used to look like.. I also really like this outfit.. remind me who this is by?” To which, Anand replied, “By Goldfinger?” After all this, Sonam’s last picture had all the Barbie feels with her ever radiating smile as she lied down on a blue couch. Captioning the picture, she wrote, “This is me being casual and nonchalant. Obviously these are throwback.. please tag the credits guys I don’t remember..” and Anand ended up declaring his favourite thing about Sonam. He replied, “FAVE! That smile.” followed by heart emoticons. Have a look at these lovebirds' love-filled conversations. 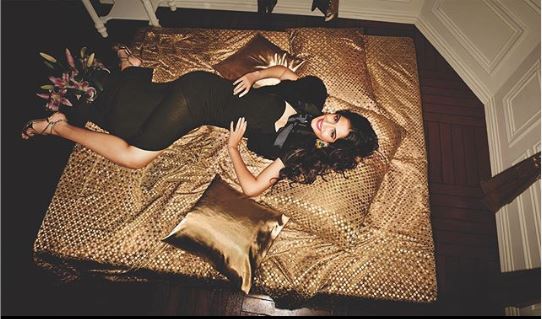 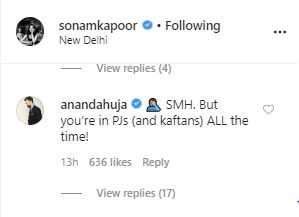 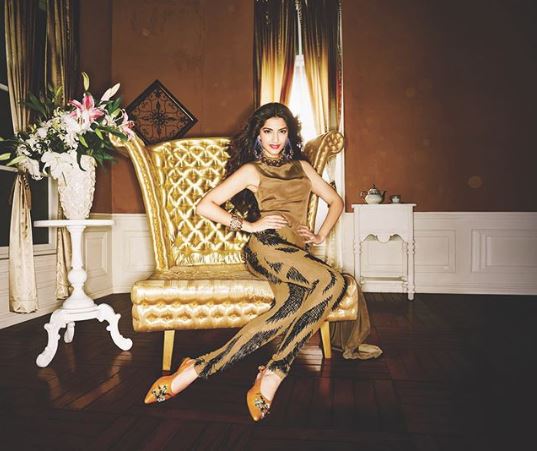 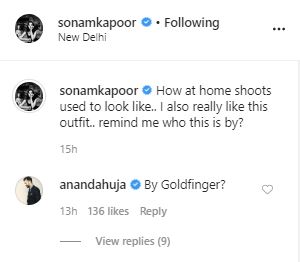 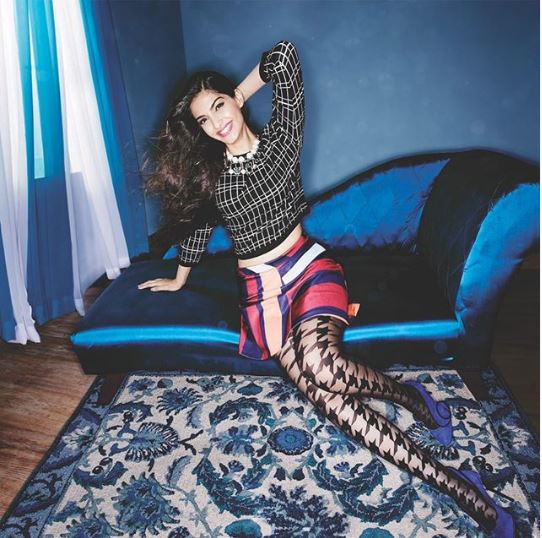 In 2019, in a chat with Cosmopolitan, Sonam had opened up about her married life with husband, Anand S Ahuja and had remarked, “It's been beautiful! To have someone like Anand as a life partner is a blessing. I have never been happier. Life hasn't changed much. Of course, I am more in love with him than ever before, but, in terms of work, it's the same. We give each other's work a lot of importance. So, we understand. Besides, we always make it a point to take time out for each other. On days we can't, we have a mutual understanding. The key is effective and clear communication, which we always maintain.” (Recommended Read: Neetu Kapoor Thanks Ambani Family For Being Their 'Guardian Angels' In Rishi Kapoor's Cancer Journey) 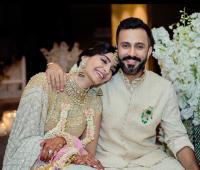 In the same interaction, she had also shared the biggest learning from her relationship and had retorted, “Being with the right person puts everything else in motion. Anand and I truly believe in empowering, loving, and supporting each other. The fact that I can be myself with him is the most important part of us.” (Don't Miss: Kanika Kapoor Is Missing Her Kids, Aayana, Samara And Yuvraaj, Shares A Beautiful Picture) 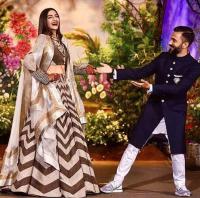 Sonam and Anand are such cuties! Learn from them and be your partner’s biggest cheerleader!