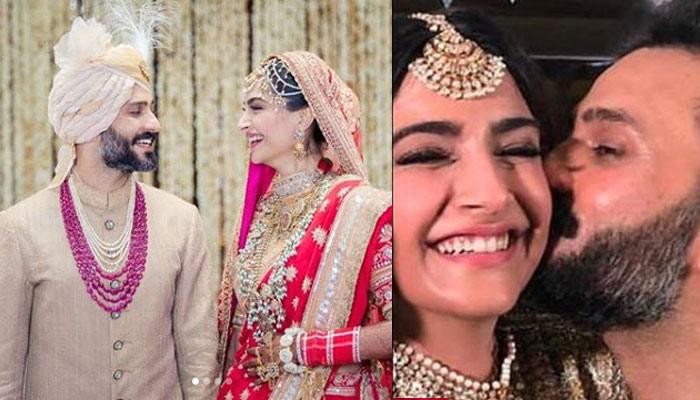 Finally, one of the most talked about and the much-awaited weddings of 2018 took place. It’s May 8, 2018, a date to remember forever when Bollywood’s diva Sonam Kapoor shattered many hearts. Sonam tied the knot and entered the doubles’ club with long-time beau (now husband), Anand Ahuja. The lovebirds have had a proper Sikh wedding in the presence of their families and friends. (Also Read: Sonam Kapoor's Brothers Pose For A Picture Together With Her Red Entry Dupatta On Her Wedding) 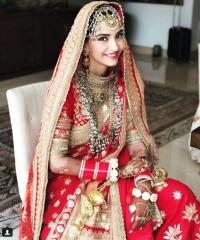 On May 7, 2018, Sonam and Anand hosted a sangeet/mehendi ceremony Sunteck, Signature Island. So many pictures and videos got aired and went viral, but one that caught everyone’s attention was where Anand Ahuja was kissing lovingly on Sonam Kapoor’s cheek. Their love and respect are very much evident in this adorable snap. Here’s the picture that we are talking about: 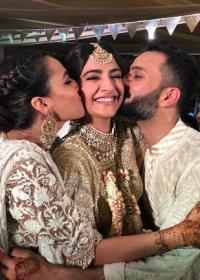 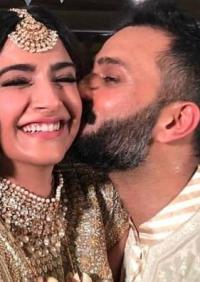 Don’t they look super-cute together? All Sonam Kapoor’s fans are drooling over this picture! On her sangeet night, the couple looked royals in Abu Jani Sandeep Khosla couture. On one hand, Sonam sported high-neck heavily embroidered cap sleeves muted gold blouse and a matching dupatta. On the other hand, Anand looked dapper in an ivory white kurta which he layered with a Nehru collar sleeveless jacket, adding an emerald brooch to it. Here’s a complete picture of the two: 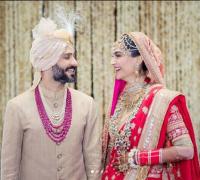 Biggies from the industry namely, Karan Johar, Shilpa Shetty, Swara Bhaskar, Jacqueline Fernandez, Masaba Gupta, Katrina Kaif, Rani Mukerji, etc. were present at the do to bless the couple. It was on her sangeet ceremony itself, the kalira and chooda ceremonies were done. (You May Also Like: Sonam Kapoor Wore Customised Peacock Shaped Kalire, Watch The Video Of Sisters Tying Them!) 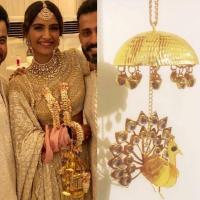 On their wedding, Anand looked handsome and at the same time he is looking every bit of royal. The groom wore a beige and cream-coloured sherwani with a complementing pagdi. He has teamed up his look with exquisite haar in the neck. On the other hand, Sonam looked so pretty in her red wedding lehenga with intricate embroidery of lotus motifs (she had same motifs in her mehendi also). Her chooda is very old-style and traditional. And she completed her look with jadau jewellery. (Also Checkout: Sonam Kapoor's First Look Post-Marriage, Looks Stunning In Chooda And Sindoor) 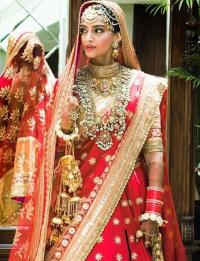 Heartiest congratulations to Sonam Kapoor and Anand Ahuja on entering the holy bliss of matrimony. Much love to you two!

NEXT READ: Anand Ahuja Ties Mangalsutra To His Wife Sonam Kapoor Ahuja, She Is Smiling With Happiness