Amy Jackson is in a relationship with her long-time beau, George Panayiotou. The 6-months-pregnant actress is enjoying her babymoon in Morocco. Amy and George got officially engaged on May 05, 2019. 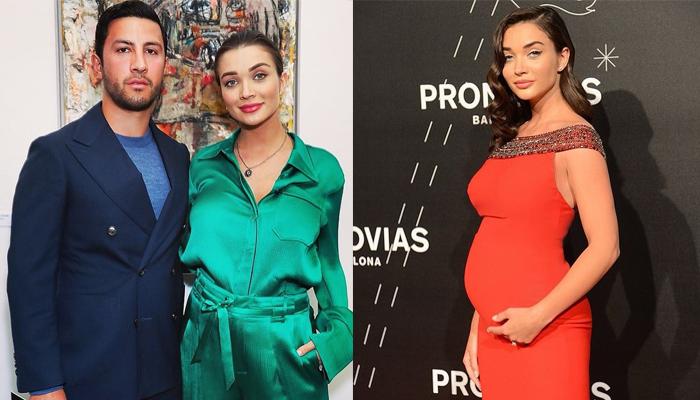 It has been rightly said that the greatest joy in your life is when you hold your child in your hands for the first time. That bliss is priceless and when your tiny cotton ball puts his little hands on your chest, your heart starts to beat with utmost happiness brimming inside it. Many of our favourite celebrities have given us #parentalgoals and #pregnancygoals, time and again. And the latest addition to the same is Amy Jackson. (Don't Miss: Soha Shares Pataudi Family Picture With Saif-Kareena-Taimur, Sara-Ibrahim And Sharmila Tagore)

Amy Jackson is pregnant with her first child and is on cloud nine these days! The 2.0 actress has been in a relationship with her long-time beau, George Panayiotou. And it was on New Year 2019 when Amy had announced her pregnancy on her Instagram handle. Amy Jackson has been enjoying her pregnancy phase to the fullest and her social media handles are definitely on another level, owing to her pregnancy.

Amy Jackson is currently in the beautiful city of Marrakesh, Morocco where she is enjoying her babymoon. On her Instagram stories, she recently posted a mirror selfie flaunting her baby bump and wrote, ‘6 months’ atop it declaring the completion of her 6th month of pregnancy. Amy posted another photo on her Instagram handle wherein she could be seen soaking in the sun in her balcony from her hotel room. Take a look at the pictures:

Amy Jackson had recently shared her first picture of her baby bump on March 31, 2019. Sharing the following picture, she had captioned it as, “I’ve been waiting to shout it from the rooftops, and today, being Mother’s Day, it couldn’t be a more perfect time. I already love you more than anything in this world, the purest most honest love. We can’t wait to meet you our little Libra one.”

Amy Jackson and George Panayiotou officially got engaged on Sunday, May 05, 2019, amidst close friends and family members in London. Sharing a picture from their London engagement ceremony, Amy Jackson captioned it as, “The most unbelievable day celebrating our engagement. Thank you to all our amazing friends and family who made it so special so much love (Yiayia doing the Greek traditions for us).”

In a recent interaction with HELLO! magazine, Amy Jackson had talked about her pregnancy and was quoted as saying, "It was totally unplanned. We had no idea." Amy had further gone on to add that she and her fiancé, George are excitedly looking forward to becoming parents. The 27-year-old actress had remarked, "We’re at that stage where we’re definitely ready for it. I don’t think you can ever plan something perfectly, but we’re in such a good place. We’re happy together, we have a beautiful home and we’re excited to be a mum and dad."

Amy Jackson had further revealed that her pregnancy has brought her closer to her beau, George. She was quoted as saying, "We know each other pretty well – the good, the bad, the ugly and everything in between. We were inseparable before, but this is a different closeness. It’s important to have your own career and identity, but it’s nice to have this time to think about what’s next. I’ve always gone from one film to the next so I’m using this as a bit of respite – for now."

For the uninitiated ones, it must be mentioned here that Amy and George are all set to tie the knot in 2020 in a beach wedding. A Times of India report had recently revealed, “The couple will marry in a Greeks wedding. The couple is currently zeroing in on the right location in Greece for a beachside wedding. Amy wanted a beach-side venue for her special day and they are currently looking for the perfect venue at villas near Mykonos Island. The actress had visited the place with her beau last year and fell in love with the beautiful locale. The couple will tie the knot as per Christian rituals. Amy also plans to settle in the UK after getting married."

Amy Jackson knows how to rock the pregnancy looks like a pro, right? Stay tuned in here for more follow-ups.