South superstar, Allu Arjun posted a beautiful picture with his wife, Sneha Reddy from her birthday celebrations. Take a look!

There aren't a lot of Telugu actors, who are as popular as a superstar, Allu Arjun across the country. Whether we talk about his professional excellence or his personal life, the actor is simply one of his kind, as he has mastered the art of balancing work and family over the years. The Arya actor, Allu Arjun had gotten married to his long-term girlfriend, Sneha Reddy on March 6, 2011, and the couple were blessed with a baby boy, Allu Ayaan on April 3, 2014. (Recommended Read: Inaaya Naumi Kemmu Looks Like Elsa In Blue-Coloured Dress On 3rd Birthday, Poses With Soha And Kunal)

After two years, on November 21, 2016, the couple had embraced parenthood for the second time and had welcomed a baby girl, whom they had named, Allu Arha. We have seen a lot of pictures and cute videos of the whole family and the beautiful couple on their respective Instagram handles. However, this time, the doting husband, Allu Arjun has wished his wife, Sneha Reddy, with a heartfelt wish on her birthday. Scroll down to see it! 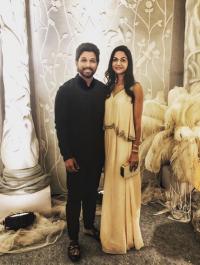 On September 29, 2020, South superstar, Allu Arjun took to his Instagram handle and shared a beautiful picture from his wife, Sneha Reddy's birthday celebrations. In the photo, Sneha Reddy looked gorgeous as ever and while she cuts her birthday cake, her hubby, Allu Arjun can be seen clapping with a broad smile on his face. Along with this adorable picture, the doting husband penned down a cutesy note for his wife and it can be read as "Many many happy returns of the day to the most special person in my life . . Wish to spend more n more birthdays with you. Happy birthday cutieeee... #allusnehareddy." Take a look: There's no doubt that Allu Arjun and Sneha Reddy are the cutest couple of the film industry and never skip a moment to swoon us with their adorable PDAs through their respective social media handles. For instance, on March 3, 2020, Allu Arjun had taken to his Instagram handle and had shared an unseen photo from his wedding diaries. The actor had written a sweet line at the bottom of their lovely picture that could be read as "9 years of marriage. Time is getting over fast. But love grows every day." Along with this, Arjun had also posted a picture of his family on his Instagram stories and had thanked his wife for giving birth to their two little children, Ayaan and Arha. Take a look: 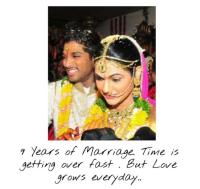 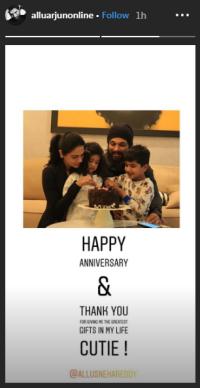 Giving an insight into their beautiful love story for the uninitiated, it was love at first sight for Allu Arjun, when he had met Sneha for the first time at one of his close friend's wedding. He was completely bowled by her beauty and had gotten introduced to her by their common friends. Both Arjun and Sneha had exchanged their numbers, and within no time, they had fallen madly in love with each other. After a long dating period, when Allu Arjun's parents had approached Sneha's parents, the proposal was accepted in just 5 minutes and rest as they say is history. (Don't Miss: Sania Mirza And Izhaan Mirza Malik Enjoy Their Pool Time As The Doting Mommy Plays With Her Munchkin) 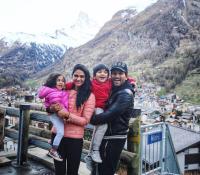 Now, after all these successful years of their married life, the two are enjoying one of the best phases of their respective lives together with their kids, Ayaan and Arha. Like a doting father, Allu Arjun loves spending time with his kids but of course holds some extra space in his heart for his daughter, Arha. The actor had posted a lot of pictures and videos of him playing with and teasing his little daughter, Arha on his Instagram handle. For instance, on March 2, 2020, Allu Arjun had taken to his Instagram handle and had shared a cute video with his daughter, Allu Arha. In the video, the Bunny actor was seen having a hilarious conversation with his daughter, wherein, she had referred to him as her 'bae'. Along with the video, he had written a sweet short caption that could be read as "She's my Bae (Bey) #fatherdaughterlove #justforfunn #alluarha." Take a look at the video. (Also Read: Saira Banu Reacts To Dilip Kumar's Ancestral Home In Pakistan To Be Preserved By Their Government)