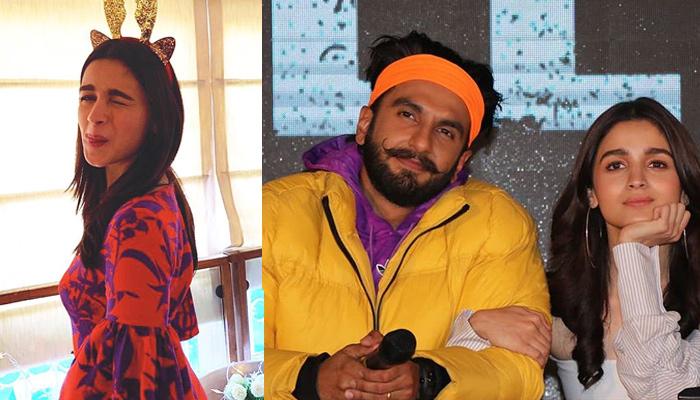 The trailer of what looks like going to be one of the most promising films of 2019, Gully Boy is already creating quite a niche for itself in the hearts of the audiences. For the first time ever, we will get to see the amalgamation of two A-listed Bollywood star perfromers, Ranveer Singh and Alia Bhatt together in one screen. Apart from them being co-stars, Alia and Ranveer also share a different bond with each other. Want to know how? Read on! (Do Read: Ranveer Singh Teases Alia Bhatt At Gully Boy's Trailer Launch, Says Ranbir Is More Special [Video])

Alia is Ranveer’s now wife, Deepika Padukone’s ex-boyfriend’s current girlfriend and he is leaving no stones unturned to pull Alia’s leg! The soon-to-release film’s trailer was launched yesterday (January 09, 2019) and both Ranveer and Alia looked ethereal for the promotions. Apart from discussing whereabouts of the film, journalists and netizens saw Ranveer and Alia in their candid best, with the duo happily answering questions about their private lives. When a journalist asked Ranveer how did Deepika like the trailer, the newbie hubby was quoted as saying, “Trailer unhone dekhi nahi hai. Teaser dekha toh bohot pasand aaya. It was a very novel approach. Zoya madam ne khud apne haathon se kaata hai. She loved the teaser and she is very proud of me.”

And then came Alia’s turn to answer a personal question. A media personnel stationed at the conference asked the Raazi star if she will hit a girl if she tries to get close to her boyfriend. To which, an all-smiling Alia replied, “Abhi tak to nahi, par zindagi baki hai, par shayad kabhi nahi karungi kyunki I am non-violent.” However, she further added that in her head she might think about the same. Her co-star Ranveer, famous for pulling the leg of her co-actors, teased her once again by reciting a dialogue, apt for the situation from their film! Checkout the video here:

Alia Bhatt is grabbing a lot of headlines these days due to her growing closeness with co-star-cum-beau, Ranbir Kapoor and his family. The 25-year-old actress has never shied away from the fact that she has had a crush on Ranbir since she first met him when she was 11! Yes, in an interview she had revealed, “I met Ranbir when I was 11, I had auditioned for Black. Since then, I had a crush on him. And then he came in Saawariya, and I had already seen him." Actress Anushka Sharma had once asked Alia if she has Ranbir Kapoor posters in her room, to which Alia answered, “No, but I used to stare at his pictures." So adorable, isn’t she? (Must Read: Ranveer Singh Reveals Wifey Deepika Padukone Will Get A Special Solo Rap Show, Video Inside)

Alia was the cover face for Vogue India magazine in December 2018 and was asked an interesting question pertaining to her love life basis a dialogue in one of her best films, Dear Zindagi. Taking up a dialogue of hers which goes something like, “Is there someone like ‘the one’? What is this perfect one exactly? Mere liye toh koi perfect hona chahiye na..” Alia replied indicating her ‘perfect one’ in real-life by saying, “Yeah, I think I have.” That’s not all peeps, for the Student Of The Year actress further added that when in love she is an ‘affectionate, beautiful person’. She said, “I have stars and a halo on my head, and I’m walking around with rainbows. I like to keep it simple and sweet.”

In an interview with BollywoodLife, talking about love, Ranbir had stated, “I think every human being does extraordinary things only when they are in love. So I believe that love is something which is a privilege if it comes in your life and to be in a happy, beautiful positive place in a relationship with, it could be with a girl, a guy, with a friend, your mother, your father, or anybody but when there is some genuine love, it’s really beautiful.”

While the couple themselves have remained mum about their relationship, but their families have been very upfront about them and always dropped major hints about their bond. It was only recently when Alia’s daddy dear, Mahesh Bhatt finally confirmed his daughter and ‘probable’ son-in-law, Ranbir Kapoor’s relationship and we couldn’t be more excited! In an interview with The Telegraph, the Raaz director revealed, “Well, of course they’re in love. You don’t need to be a genius to get that! I love Ranbir… he’s a great guy. What they do to their relationship is something they’ll have to figure out.” (Also Read: Ranveer Singh Explains Why 'Lakshmi' Deepika Padukone Blessed Him, Karan Johar And Rohit Shetty)

Disclosing their marriage plans, Mahesh ji shared, “Whether it’s heading towards that port called ‘marriage’ — which is an institution that needs to be questioned in the second decade of the 21st century — is something for them to figure out. I’m no one to hazard a guess when that would happen or which way the relationship is going. Its life and life needs to be lived on its own terms. Let’s wait and see what tomorrow brings for us!”

That is the most difficult part, Mahesh ji, ‘to wait’! (*wink wink*)