Alia Bhatt and Anushka Sharma have redefined the female version of “Bromance”. Their love for each other can be clearly seen at International Customs Day which was held in Mumbai last year. Anushka tied the knot with Virat Kohli on December 11, 2017, in a close-knit affair in Italy. The couple hosted a wedding reception party in Mumbai for their industry friends on December 26, 2017.

Alia, who also made a cameo in Anushka and Ranbir Kapoor starrer Ae Dil Hai Mushkil, was not able to attend the ceremony. At the International Customs Day event, Alia congratulated Anushka and apologised for missing her reception party. Alia said, “Congratulations Anushka for getting married. Also, I couldn’t be at Anushka’s wedding since I was travelling but this is my gift to you.”

Dedicating a song to Anushka, Alia crooned the title track of Ae Dil Hai Mushkil. Their light moments and romantic dance moves onstage took the stage on fire. They both have been ruling our hearts in the recent past and now they have together taken their “Womance” to another level. Alia and Anushka also shook their legs on Anushka’s song from Band Baaja Baaraat, Ainvayi Ainvayi.

After Virat and Anushka announced their wedding to the world, Alia took to her Twitter to wish the newly-wedded couple. She tweeted, “Congratulations @AnushkaSharma and @imVkohli!!!! Wishing you all the love and happiness in the world!” In an earlier interview, when asked about the most handsome sportsperson in India, Alia was all praises for Anushka’s husband and cricketer, Virat Kohli. She remarked, “Virat Kohli! With his bat speaking volumes of his ability, this 24-year-old, 5'9'' outstanding performer has outnumbered a lot of rivals with his looks. The bad boy charm has cast a spell on the womenfolk, and he certainly features in the list of the top 10 most handsome cricketers.”

Alia and Anushka have given us some major traditional fashion goals in the recent past. While Anushka left us gasping with her bridal and reception looks in her awe-inspiring Sabyasachi couture, Alia nailed her traditional looks in her BFF Kripa Mehta’s wedding in Jodhpur. Yet again these Bollywood beauties channelled Anita Dongre’s ensembles with their subtle classic looks. 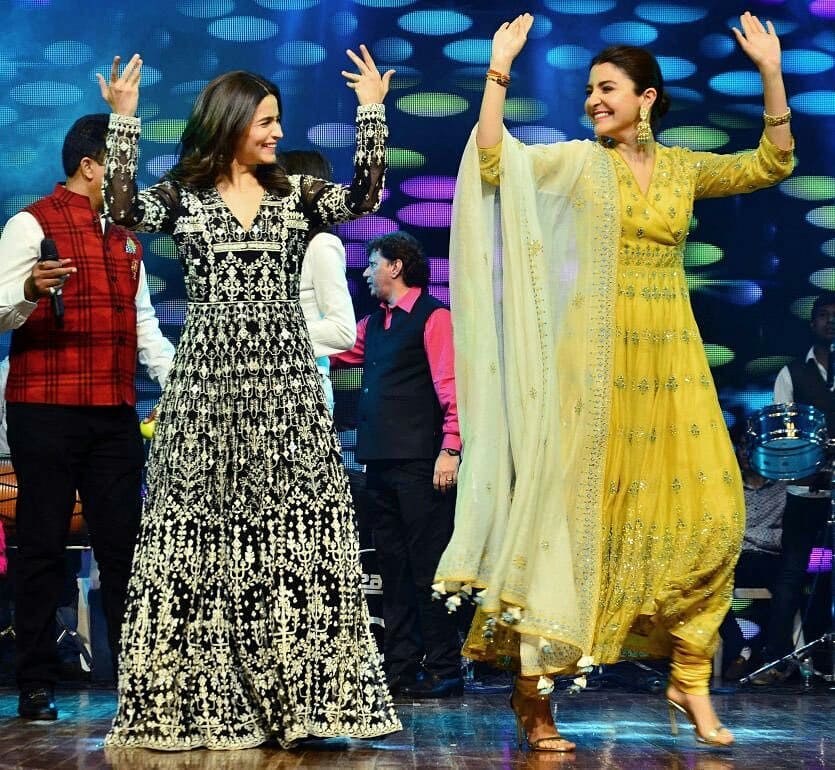 Alia chose to wear a resplendent monochrome outfit. Anita wrote about her outfit, “The stunning @aliaabhatt in one of our favourites. Traditional Rajasthani embroidery on our classic black Ilana Gown, with motifs of trees and birds, inspired by the Bishnoi tribe's love of nature.” On the other hand, Anushka looked effortlessly beautiful in in a bright yellow Anarkali. About Anushka’s ensemble, Anita wrote, “The gorgeous @anushkasharma in the magical colours of our Saranya suit. Stories of love are embroidered delicately onto this suit by our expert artisans.” 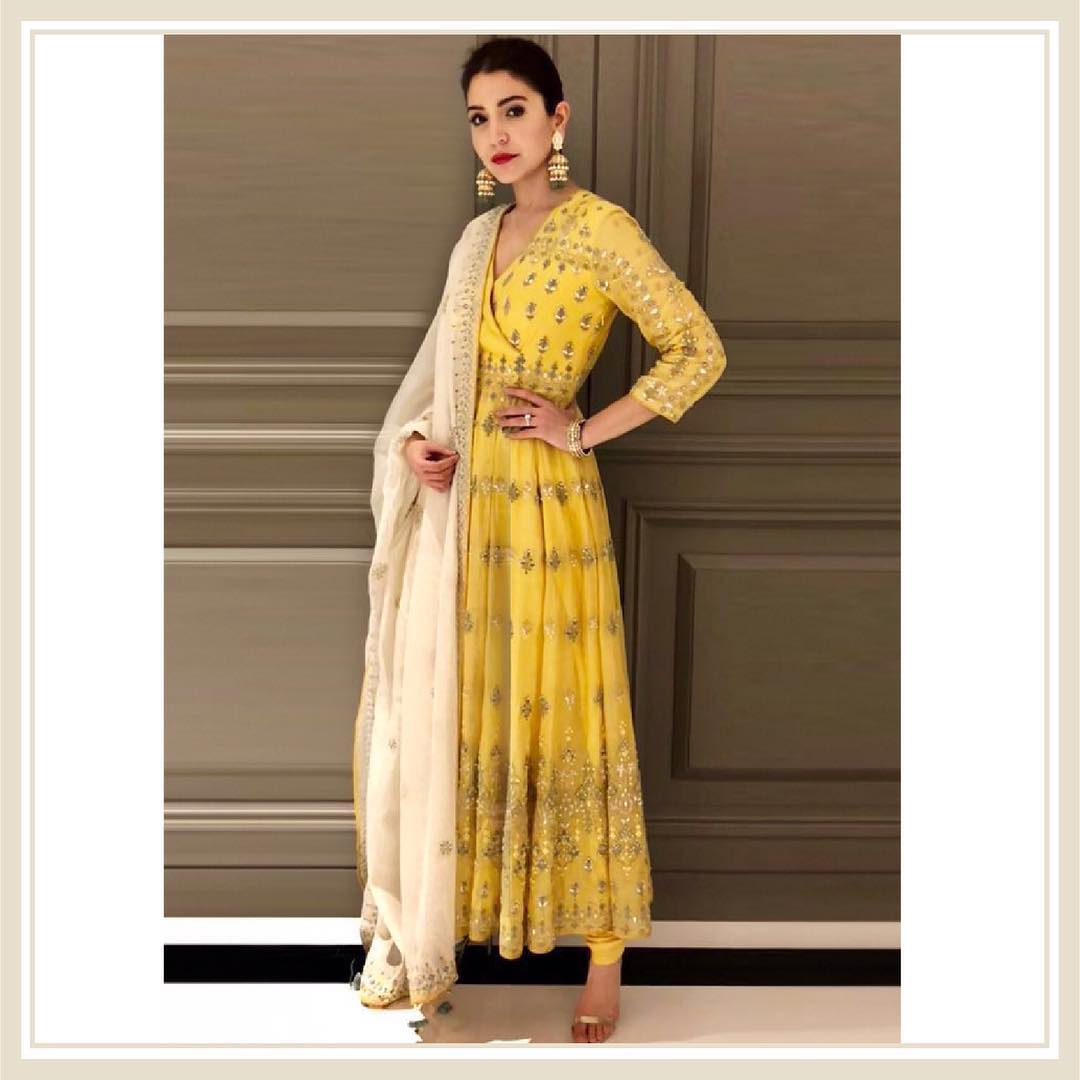 Anushka kept it simple with the minimal make up with a neutral palette and kohl-rimmed eyes and complemented her look with a soft bun, bindi and red lipstick. Her jewellery was from Anita Dongre Fine Jewellery and crafted by Jet Gems. Anita wrote, “Uncut Diamonds and Emerald beads set in fine Yellow Gold remind us of chandeliers in long Mughal hallways. @anushkasharma dons the Kaarvi jhumki earrings by Anita Dongre Fine Jewellery, crafted by @jet_gems”. Alia kept a dewy sheen and blush pink lips with highlighted brows, and left her tresses open in soft waves and looked flawless while pairing the outfit with statement danglers from Amrapali Jewels. 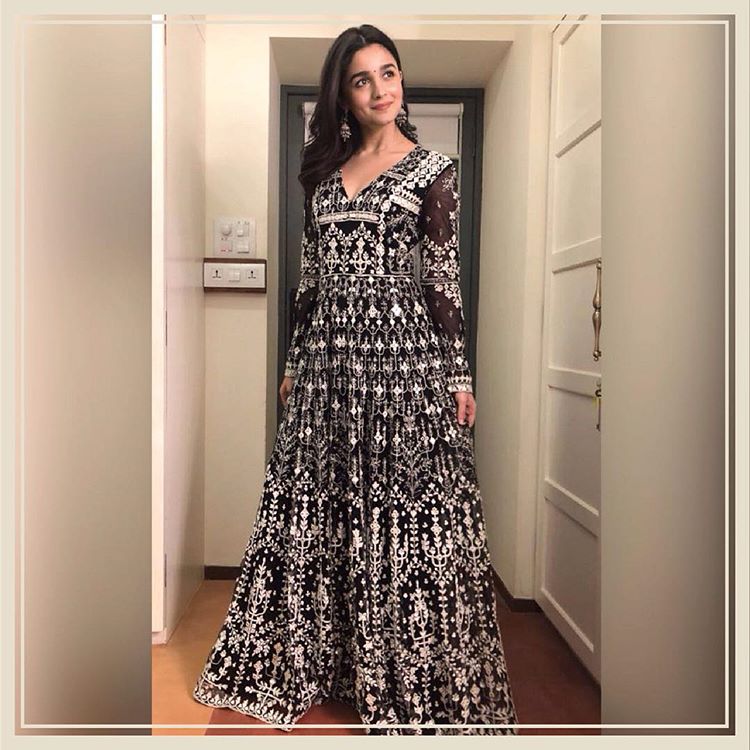 What do you think about this “Womance” in B-town?

Next Read: Mohsin Khan And Shivangi Joshi's Chemistry In Their Recent Photoshoot Is Unmissable We know how exciting and yet oh! so exhausting can bridal couture shopping turns out to be. What to wear, what will suit me, which one should I pick for which occasion are the few questions which haunt the brides-to-be until the ceremonies are over. Recommended Read: 10 Bollywood Divas Who Wore Sabyasachi