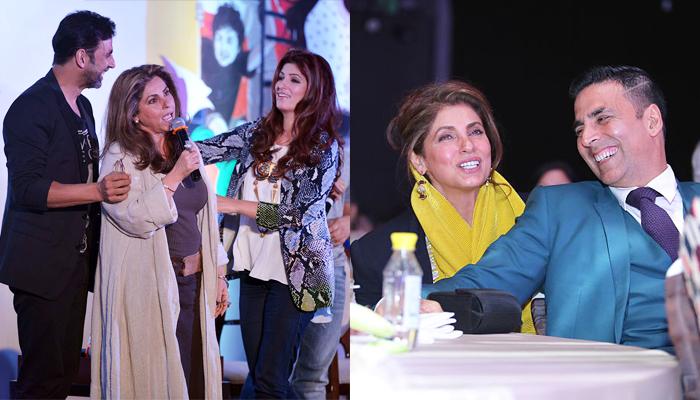 Bollywood boasts of many duos- from siblings to life-partners, but the one special bond which not many pay heed to is the one shared by a son-in-law with his mother-in-law. Akshay Kumar and Dimple Kapadia are the living examples of such an awesome connect! Yes, we all know that Akshay is a family man, and we often see him praising his wife, Twinkle Khanna, and getting spotted on vacations with his children- Aarav Kumar and Nitara Kumar. (Suggested Read: Ekta Kapoor To Host A Grand 'Naamkaran' Ceremony For Her Newborn Son Ravie, Details Inside)

Akshay Kumar shares one hell of a bond with his mum-in-law, Dimple Kapadia, as well. And an unseen video which has surfaced online is a proof of the same. The video which is from Koffee with Karan season 4 is Akshay's unseen rapid fire round! During the course of the round, host Karan Johar asked Akshay, "Who would you go on a date with if you weren't married?" Akshay's reply will momentarily shock you but there is a twist after a dramatic pause. Akshay replied, "Dimple Kapadia" and then with a whimsical pause, he added, "And the whole night talk about her daughter." Whoa! He is so witty. Check out the video here:

Akshay Kumar never fails to acknowledge the awesome camaraderie that he shares with his mother-in-law, Dimple Kapadia. On Twitter, he was once asked by his fan that who is his best friend in the industry. The Kesari actor had lovingly replied, "My mother-in-law."  So sweet, isn't it? Akshay is surely a personification of #Damaadgoals.

Dimple Kapadia herself has always been vocal about her son-in-law, Akshay Kumar. Talking about him once in an interview, Dimple had shared, "Akshay Kumar is more than a son to me. What I love about him is that there is never a dull moment with him. He is always up to some nonsense." (You May Like: Vivek Dahiya Looks Unrecognisable As He Disguises Himself To Prank Divyanka Tripathi At 'The Voice')

Recounting an anecdote about one of Akshay's pranks, Dimple had revealed, "I remember once I was trying to call a pandit (priest) and called Akshay instead. I didn’t see the number properly and dialled it incorrectly. Someone answered in a sleepy voice and said ‘ek kaam karo apne jamai ki puri seva karo’ (Serve your son-in-law). That’s when I realised it was Akshay and not the pandit. He is mad and very naughty and I love that. Akshay is always up to some nonsense."

Akshay Kumar, not only shares a strong bond with Dimple Kapadia but he also shared a warm friendship with his father-in-law, Rajesh Khanna. Recently, on Rajesh Khanna and Twinkle Khanna's birthday (both of them share their birthdates) on December 29, 2018, Akshay took to Instagram and wrote, "While growing up I’d heard fascinating tales of his superstardom, never imagining one day I’ll marry his fascinating daughter...thank you for giving me this precious one. Happy birthday to the both of you."

Akshay had once commented in an interview about his equation with his father-in-law. He was quoted as saying, “He used to call me buddy, and we were friends. We could talk and discuss anything and everything. More than my father-in-law, he was my friend. Dad always said I should be a writer was proud of my maggot filled poetry-would've been beaming that I got that paper in my hand eventually.” (Must Read: Mira Rajput Kapoor Takes 'Her Love' Zain Kapoor To The Park, Shares A Glimpse Of 'Day 14 Of Walking')

Akshay Kumar is truly a complete family man in every sense, right? What do you think of his friendship-like equation with mother-in-law, Dimple Kapadia?