Akshay Kumar and Twinkle Khanna's sea-facing duplex gives a beautiful look into her childhood memories surrounding a mango tree and modern aesthetics. Step inside as we give you a virtual tour!

We all want to have the house of our dreams. A nice house at our preferable destination, a lush green patio, a lavish living room, a cosy dining hall, a neatly decorated bedroom adorned with crisp linens and aesthetic decors are what one can dream of. Well, who wouldn't want to deck up their house with the most beautiful ornamentations?

Bollywood's one of the most hilarious couples, Akshay Kumar and Twinkle Khanna live in an Arabian Sea-facing lavish abode in Mumbai that keeps them close to nature even after being in the middle of the chaos and pollution. Akshay and Twinkle live in their Mumbai home with their kids and pet dog. So, without any more meandering, let's jump straight into the virtual tour of their house. Bollywood actor, Akshay Kumar had tied the knot with the actress-turned-author, Twinkle Khann, and since then, they have been living their best lives. In Koffee With Karan 7, Akshay revealed that he bought the house they live in now after working in the seven-hero starrer film, Jaani Dushman. And, Twinkle is the one who helped in decorating the home. She believes in decorating with things that would tell beautiful stories. Their house opens up with a huge lush green lawn that can be seen covered with soft green grass and trees of all kinds of species. A perfect picnic spot, one might think. Every corner of the garden has a statue or an eclectic art piece that will welcome you. However, it is the mango tree that holds a special place in Twinkle's heart, as in her childhood house, Ashirwad (Rajesh Khanna's house), there was a mango tree. Narrating her memory, Twinkle had said in an interview with Vogue:

"The tree sort of burst through the glass ceiling. My sister and I would go to the terrace and pluck mangoes."

Step inside the duplex: walk-in closet, living room and more 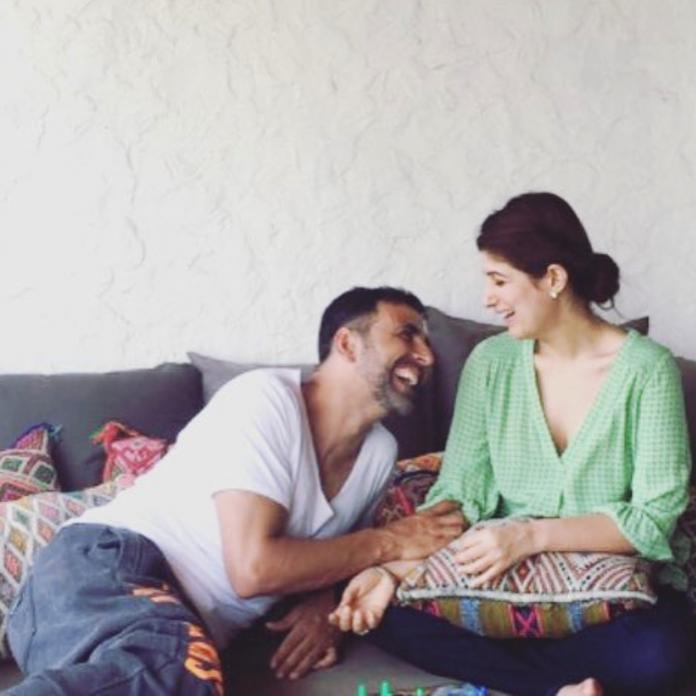 Akshay Kumar and Twinkle Khanna's luxurious abode's interior looks very serene as it has a nude colour palette all over the walls, which is neatly balanced with pieces of wooden furniture. However, the most talked about furnishing inside Akshay and Twinkle's abode is their lavish walk-in closet that is situated on the ground floor. 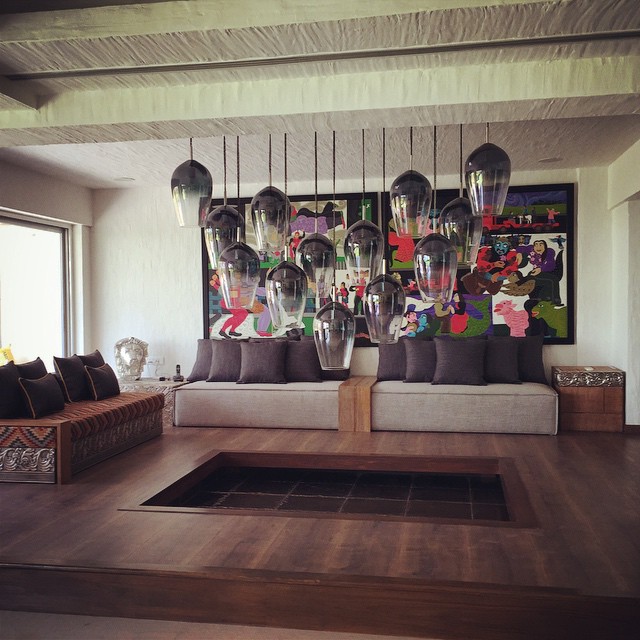 The living space has a gorgeous sofa decorated with a 13-part pendant light installation by Klove Studio. Every corner of their house is absolutely picture perfect, where sunlight and nature play a very important role and make it look even more beautiful. 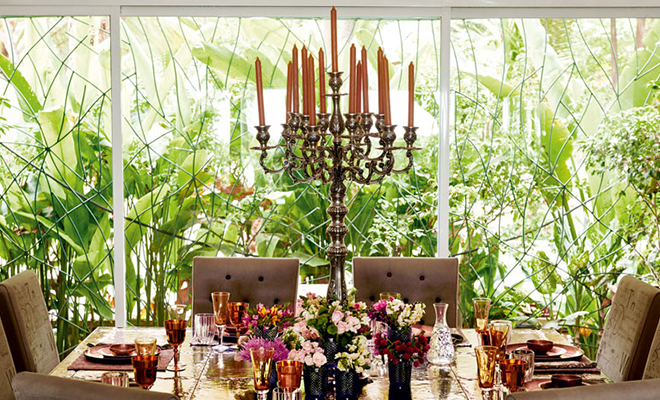 Twinkle loves to tweak and redecorate the abode with budget-friendly furnishings, plants and other decorative items. Close to the living area, they have their dining hall, wherein we can see an eight-seater table with plush chairs beautifully decorated with silverware and a candle chandelier. A perfect spot for the family to have their meals. The room separates by a glass door that gives a peek into their beautiful nature land. Twinkle and Akshay's house serves major European and Italian vibes. Twinkle loves to incorporate green everywhere. A corner of their beautiful garden has a pond decorated with blue tiles and sandstone statues and even has cute fishes in it. In one of her Instagram posts, the author had written in her caption:

"Though a green thumb does sound like some sort of a fungal infection, I believe that I could possibly be the proud possessor of one." 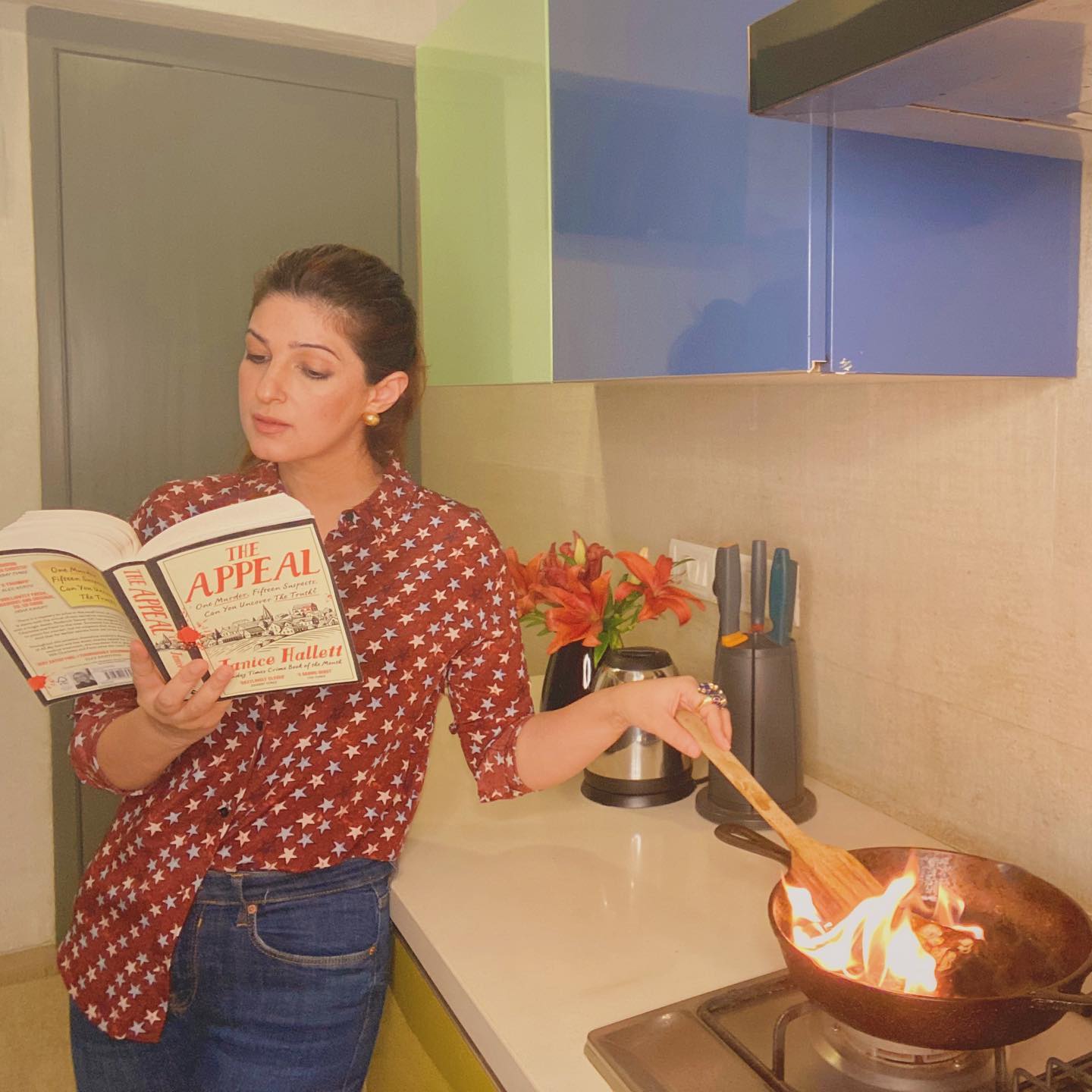 On the other hand, Twinkle's kitchen area is a very neatly decorated place. It has beige-coloured walls, a white-coloured ceramic platform with modular cabinets in blue pop colours, a chimney and a gas burner.

Sturdy home office, a space for books, and a balcony with a daybed Twinkle has a knack for interior decorations, and often, on her YouTube channel, Tweak India, she shares tips and tricks on how to revamp one's old house in a new way that also doesn't exceed a budget. Keeping that in mind, Twinkle created a serene home office for herself where she gets her inspiration to write further and better. It has a greyish workspace decorated with small planters, a table fan, some notes, her MacBook and a mood board filled with paper clips. 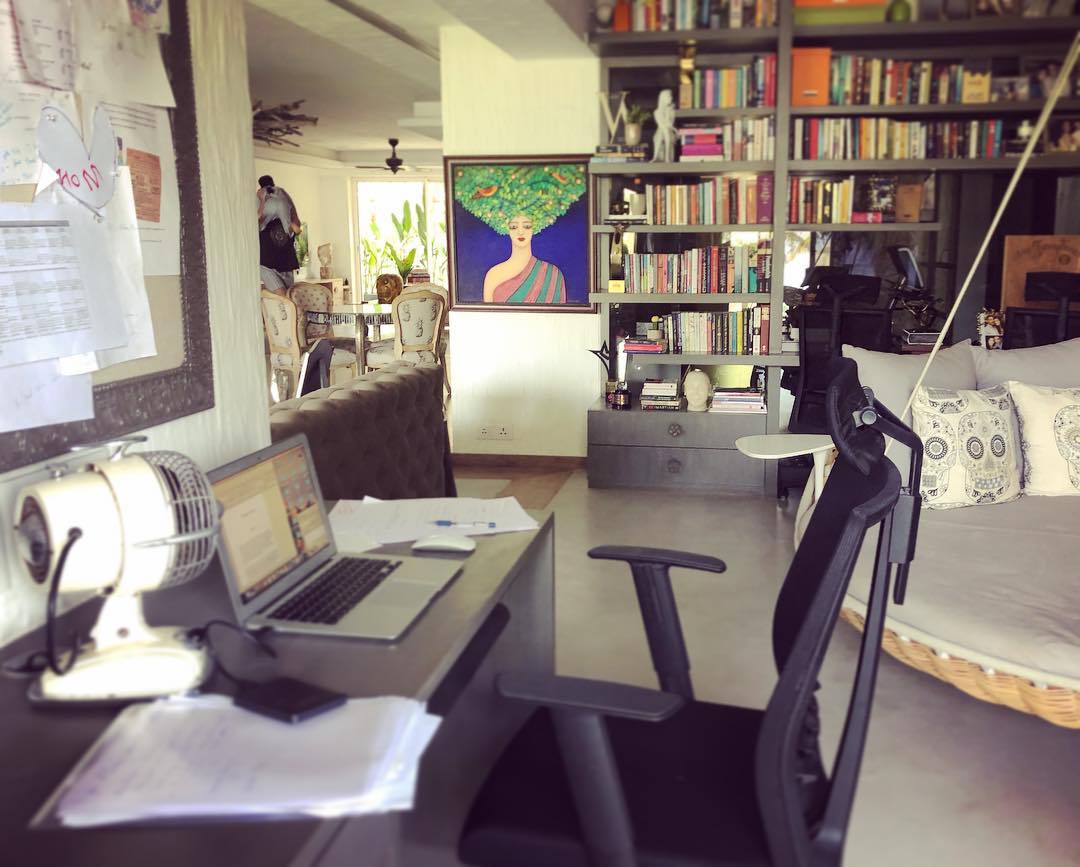 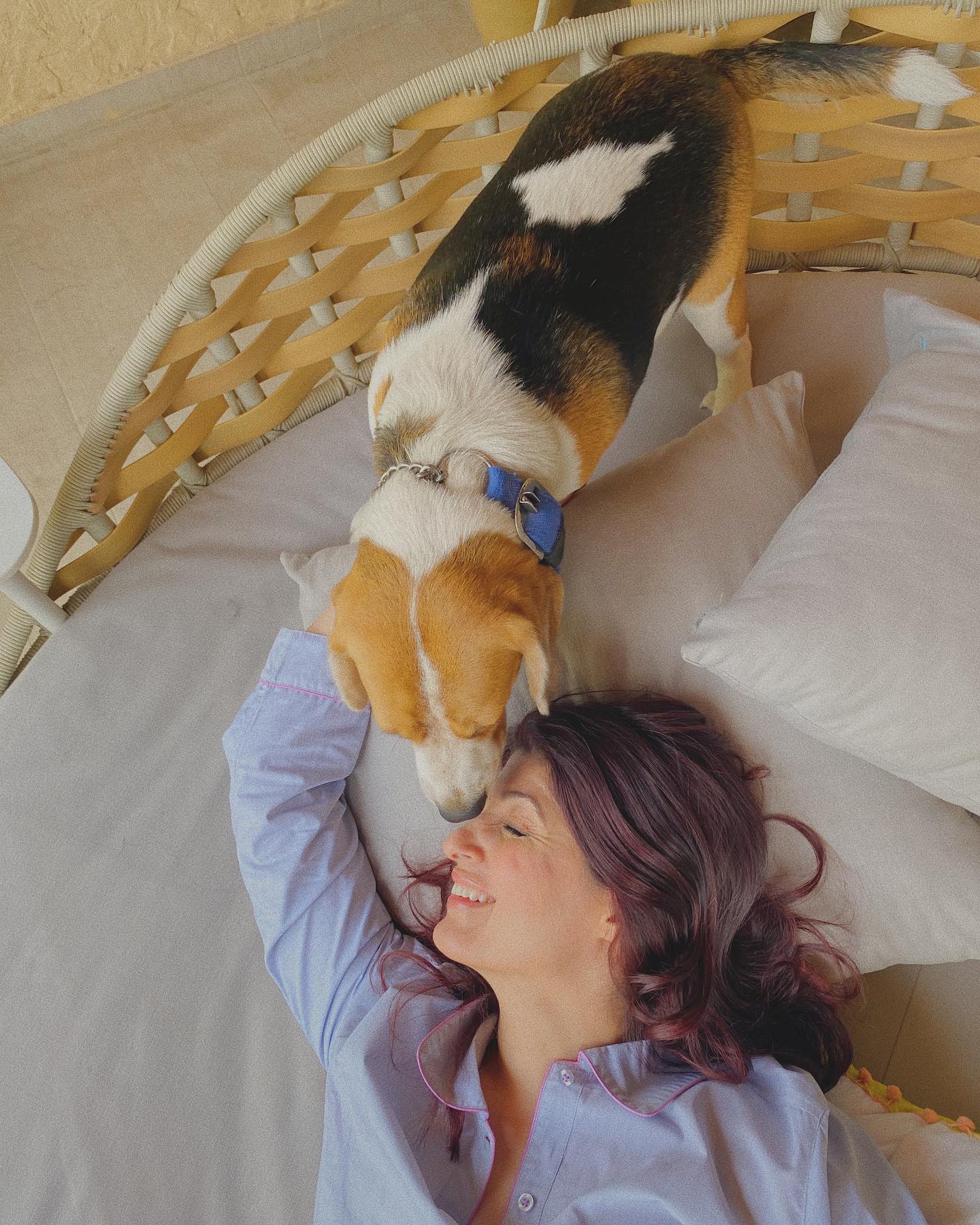 In the corner of the same room, Twinkle has filled the space with a huge bookshelf completely adorned with a lineup of books with small artefacts to give a decent look. In front of it, there's a plush swing decorated with crochet detailing, soft cushions and a gadda. Talking about decorating each corner of a room with a different mindset, Twinkle had said:

"Clutter isn't a bad thing. But you must organise your clutter so it looks neat: line it up according to a theme or colour, or intersperse it in your bookshelf." 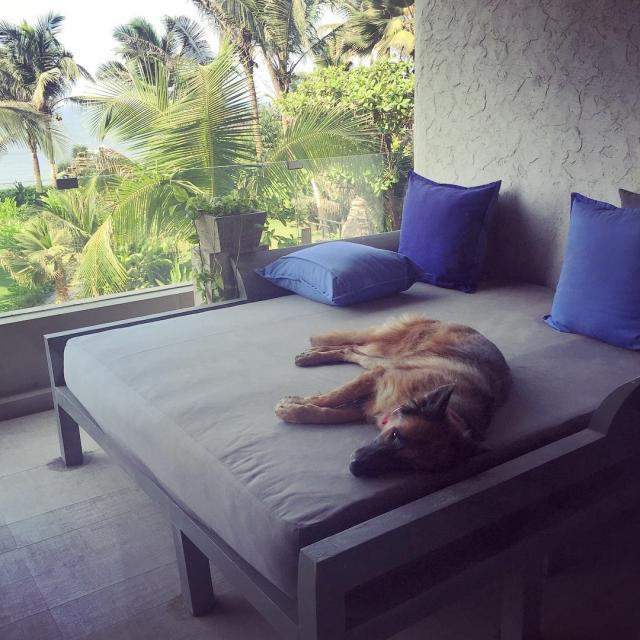 Twinkle never misses a chance to show off her lazy side. Twinkle Khanna completed their balcony with a daybed adorned with a bluish cover and blue cushions in front of a greyish textured wall. It also gives a beautiful view of the slices of green and blue. 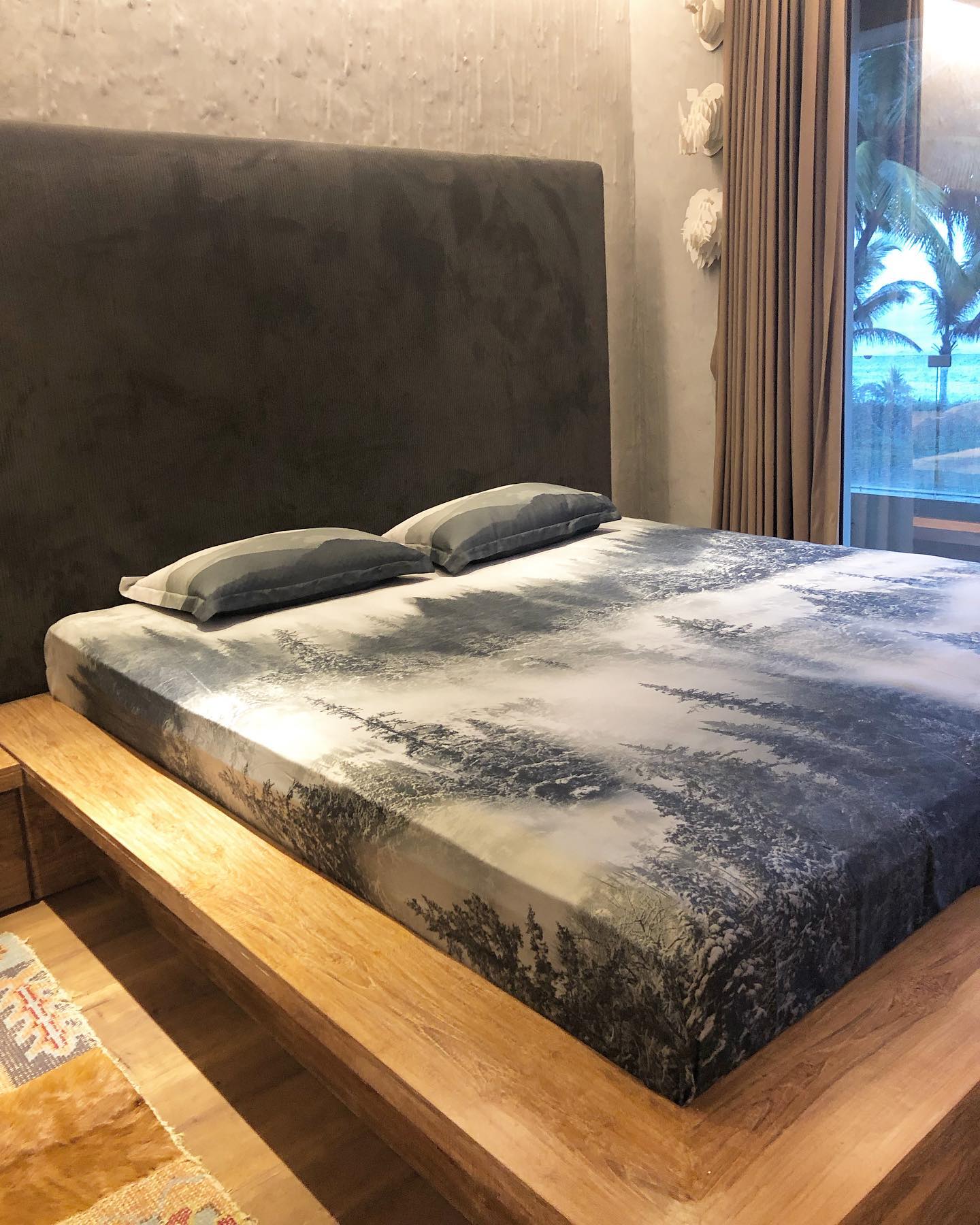 Twinkle Khanna has a beautiful and cosy bedroom. In the room, it has wooden flooring and a wooden platform bed with a soft mattress and a plush headrest. Her headrest has an elephant motif fabric. The bedroom has a serene and resting effect. 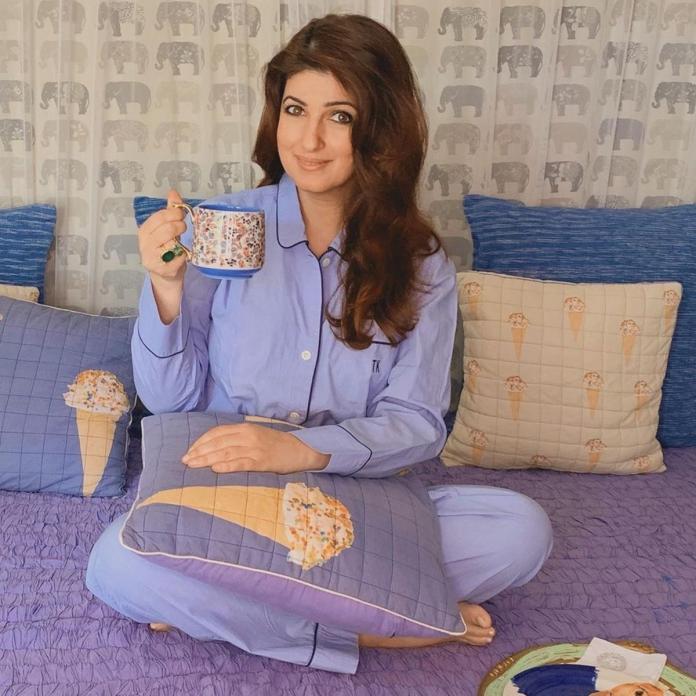 Twinkle Khanna and Akshay Kumar's Arabian sea-facing duplex in Juhu has a subtle mix of modern aesthetics with nature. What do you think about it? Let us know! 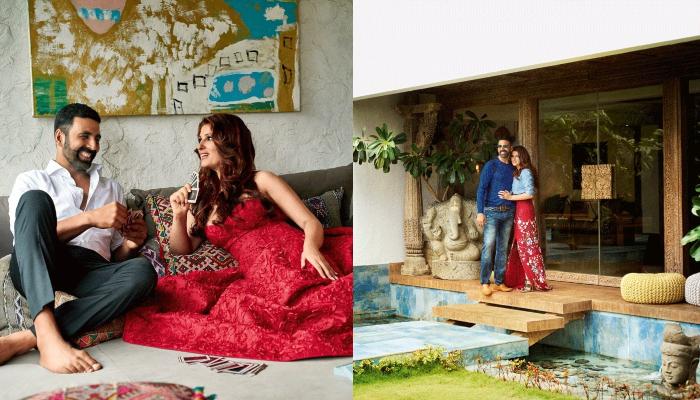 Born on September 9, 1967, as Rajiv Hari Om Bhatia in a Punjabi family in Punjab, no one knew that the little kid would rule the Indian film industry one day. From spending his early years in Chandni Chowk to blocking the streets of Mumbai with his one appearance, Rajiv Bhatia