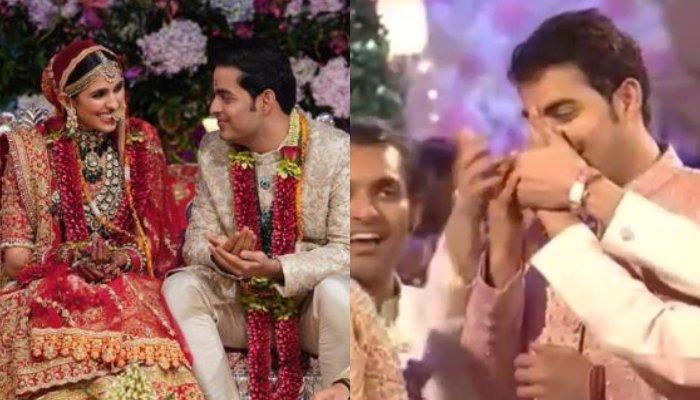 If extravaganza had a face, it would look like the Akash Ambani and Shloka Mehta wedding! We bet, there wasn’t a single Bollywood celebrity, who we possibly couldn’t spot at Akash and Shloka’s wedding on March 09, 2019, which was followed by a star-studded bash for the newly-weds held yesterday (March 10, 2019). (Do Read: Bipasha Basu Shares A Handwritten Note Penned By Her Baby Sister Vijayeta Basu)

Akash Ambani and Shloka Mehta had gotten married at the Jio Garden in Bandra where they took the seven vows. Akash had already shown us his pink wedding avatar in pictures and all that we were waiting for, was to see how Shloka will look as a bride. And trust me you, the moment the first few sets of pictures from their wedding were out, we could only gape in wonderment because Akash and Shloka complemented each other in every sense! Donning herself in an all red avatar, Shloka looked heavenly. Here is a picture in case you missed:

While pictures of sister, Isha Ambani Piramal, pulling his brother, Akash Ambani’s ears and mom, Nita Ambani was warding off evil from the newly-wed couple, a fun-filled video from the #AkuStoleTheShlo wedding has emerged which will make us crib (yet again!) as to why we weren’t there are Akash and Shloka’s wedding. In the video, Akash’s in-laws could be seen pulling his nose, which a few others grabbing it as well! Amongst Gujarati’s, this is also called as the ‘jaan’ ritual. Also see, how the Mehta family did all the rituals beautifully and warded off ‘buri nazar’ from the khoobsurat dulha who was having immense fun! Here’s the video for you to see:

While we bet you have seen enough pictures of Akash Ambani and Shloka Mehta from their big, fat wedding, what you probably need right now is to see a complete lovey-dovey picture of the newly-wed from their reception yesterday. Complementing each other in black and golden Manish Malhotra ensembles, they looked stunning! A while back, Manish Malhotra posted a picture from their do and wrote, “Presenting the Newly Weds Mr Akash Ambani and Mrs Shloka Akash Ambani both fabulous in #custommade #manishmalhotralabel #celebration #reception #dapper @aambani1 #gorgeous @shloka_mehta_official #pic @dabbooratnani @mmalhotraworld #akustoletheshlo.”

For the uninitiated, Akash Ambani, Shloka Mehta, their families and a troupe of some 500-odd guests had flown off to St. Mortiz, Switzerland to celebrate the pre-wedding festivities of the couple. Theirs was a ‘winter wonderland’ themed party and netizens were awestruck at the vast array of arrangements being made to celebrate the last few moments of the couple as bachelors. For the same, Akash and Shloka had made their ‘fairytale’ kinda entry in a white chariot. In case you missed the same, take a look at the picture here: (Also Read: Arjun Kapoor's Protective Gesture Towards GF Malaika Arora After Their Lunch Date, Video Inside)

Now that their wedding is over, there is still no harm to take a look at their extensive wedding itinerary once more. An India Today report had stated, “The Mangal Baaraat will assemble at the Trident in Mumbai at 3.30pm on Saturday. From the Trident, the baaraatis are to leave for the Jio World Centre in Bandra Kurla Complex. A high tea will be hosted for the guests at Jio World Centre at 6.30pm on March 9. Akash and Shloka's wedding ceremony will take place at 7.30pm.”

In an interview to an online portal, Shloka had spoken about keeping pace with her relationship inspite of their hectic schedules. She was quoted as saying, “Despite years and busy schedules, we have always found ways to stay connected. Akash is incredibly grounded, and we share a bond based on meaning and memories. We don't just get along - we also support each other's hopes and aspirations and are determined to build a sense of purpose into our lives together. We are lucky to have a love that began with being best friends and luckier still to have such supportive families”.

While Akash had revealed, “I am truly happy that our friendship has blossomed into love and Shloka and I are getting married, she is a truly special and extremely kind-hearted person”. In another interview with a leading media portal, Nita Ambani, post-Akash and Shloka’s proposal had said, “I have known Shloka since she was four and we are all delighted to welcome her to our home and our hearts”. A source close to the family had revealed, “Shloka is a very charming girl, extremely cultured and it’s difficult to say which of the two families is lucky with this upcoming marriage”. (Must Read: Nick Jonas Shares An Interesting Detail About His Wedding, Says 'It Was Just Our Moment')

Isn’t it amazing? Why don’t you tell us about the most fun ritual in your respective wedding customs? We await!