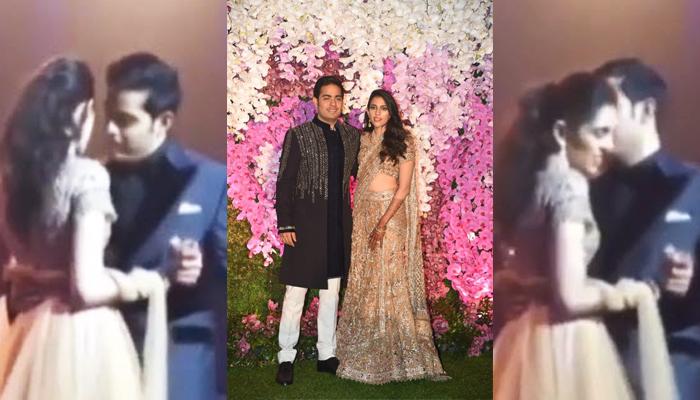 India’s richest man, Mukesh Ambani and Nita Ambani’s son, Akash Ambani is now a married man. Yes, he got married to his childhood friend, Shloka Mehta on March 09, 2019, at Bandra Kurla Complex in Mumbai. They had previously gotten engaged in March last year in 2018 in a five-star Goa resort, and now, almost a year later, Akash and Shloka have become each other’s forever. After a dreamy and lavish wedding, it was Akash Ambani and Shloka Mehta’s wedding reception yesterday on March 10, 2019, at the Jio World Centre. (You May Like: Sania Mirza's Sis, Anam Mirza, Post Divorce, Is All Set To Marry Azharuddin's Son, Asad This Year?)

Akash Ambani and Shloka Mehta’s wedding reception witnessed many A-list celebrities from Bollywood, cricketer fraternity and the world of politics. Pictures and videos from the same have been going on viral on social media, and there’s one which is making everybody emotional. In the video, we can see Akash Ambani and Shloka Mehta romantically dancing on a song, holding each other’s hands on their wedding reception. Take a look:

Speaking of the pictures and videos from Akash and Shloka’s wedding reception, there’s another one which broke the internet like how. In the video, Akash and Shloka appeared in front of the media and paparazzi at the venue last night, and guess how did Akash introduce Shloka to them? Akash said to the shutterbugs, “Thank you. Meri biwi se milo”, which left everyone in splits. Take a look:

Akash and Shloka’s pre-wedding festivities started with a bang with parties after parties in St. Moritz, Switzerland. Later, on March 06, 2019, the Anna Seva ceremony kicked-off the main pre-wedding celebrations, followed by mala, mehendi and sangeet ceremonies. (Suggested Read: Alia Bhatt Admits She Did Not Want To Get Married Until 30, Did Beau Ranbir Kapoor Change Her Plans?) 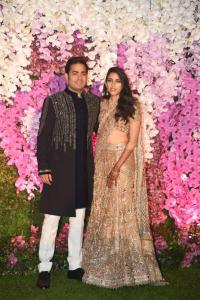 The most-awaited wedding of 2019 is finally done. A source had earlier shared the details about the same with us, “The Akash Ambani wedding started with Akash and his family paying their respects to his Dadaji and Nanaji. All the guests collected at the pre-wedding concourse for the Saafa tying ceremony even as Vishal and Shekhar engaged in some foot tapping singing to set the tempo. Seen mingling and enjoying tying the saafa, the festive Indian turban, were former British Premier Tony Blair, former UN Secy general Ban Ki-Moon global CEOs, cricket legend Sachin Tendulkar, other cricketers and Bollywood stars.” An India Today report had earlier shared the wedding itinerary, “The Mangal Baaraat will assemble at the Trident in Mumbai at 3.30pm on Saturday. From the Trident, the baaraatis are to leave for the Jio World Centre in Bandra Kurla Complex. A high tea will be hosted for the guests at Jio World Centre at 6.30pm on March 9. Akash and Shloka's wedding ceremony will take place at 7.30pm.” (Don't Miss: Unseen Video Of Shloka Mehta Dancing On 'Le Gayi Le Gayi' At Her Mehendi Ceremony Is Super-Filmy)

Akash Ambani and Shloka Mehta’s romantically dancing at their wedding reception is every couple’s dream, right? Stay tuned in here to know more about your favourite celebrities.