Ajay Devgn Reveals Secret Behind Successful Marriage With Kajol, This What All Couple Should Learn

Ajay Devgn Reveals Secret Behind Successful Marriage With Kajol, This What All Couple Should Learn

Ajay Devgn and Kajol Devgan make for one of the strongest couples in the Tinseltown. In a recent interview, Ajay has revealed the secret behind their successful married life. Checkout. 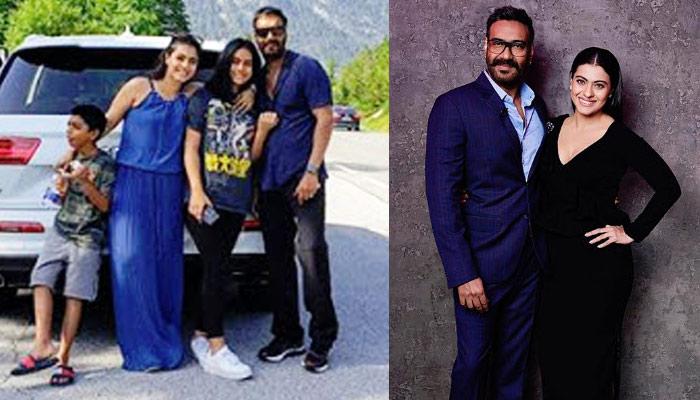 Falling in love and getting married to your ladylove/prince charming might sound like a fairytale, but life is not an easy sail and it doesn’t stay like expected always. There are ups and downs, highs and lows in everyone’s life and when a couple stays together by each other’s side during the testing times is how you conclude true love. Ajay Devgn and Kajol Devgan are live examples to all what we just mentioned. (You May Also Like: 'Bigg Boss' Fame Monalisa And Hubby, Vikrant Singh 'Welcome A New Addition' In Their Family [VIDEO])

Right from the day they started seeing each other until now, Kajol and Ajay have been a strong support to each other. Many people doubted their union, courtesy their poles apart nature, nonetheless, Kajol and Ajay have proved everyone wrong for how they have managed to shine as the strongest couple in the Tinseltown. It's been almost two decades that they have been married to each other and their relationship is for keeps undoubtedly.

Now, in an interview with the Filmfare, Ajay has recently revealed the secret behind his successful marriage with Kajol for 20 years. The Golmaal actor was quoted as saying, “She’s remained herself and I’ve remained myself. Both of us have not changed. That’s the most important thing. Also, we’ve stuck together through thick and thin.”

Earlier, in an interaction with a leading portal, Kajol had mentioned her point of view in respect to their happy married life. The Fanaa actress had then stated, "I think our relationship has worked only because I speak a lot, and he listens quietly. So, the secret to our happy married life is that Ajay doesn't say much. And that we're best of friends." (Also Read: Shahid Kapoor Revealed He And Kareena Kapoor Dated Within A Week Of Meeting Each Other [Throwback])

Even prior to that when she was asked why she had tied the knot with a not-so-popular actor, she had remarked, “It was the right thing for me to do at that point of time. I had been already working for around eight and a half to nine years. So, I was ready to kind of calm down on my work front and kind of take it easier.” She had further gone on to add, “I was doing four to five films a year. I didn't want to do only that and to only live like that. That wasn't what I had set out for. So, I assumed that I would get married and do one film a year. I'll be happier and be more settled."

Kajol had also once shared what’s going wrong with the couple these days, "I think we're losing tolerance (and no, it's not an intolerance remark btw) it's about losing patience. We're just losing the willingness to go that little bit far ahead or to give people their second chance." She had further added that the couple nowadays believes in letting go rather than trying a bit harder, “We don't give any benefit of a doubt to our partner anymore. Today, we're just waiting for the person to make a mistake so that we can pounce on him and tell, 'hey now I am one up there. Now you see.' I think marriages and relationships cannot be like that if they have to be successful!" (Checkout: Chhavi Mittal's Two-Month-Old Son Arham Hussein's First Pictures Are Making Us Drool Over Little One)

Talking about his superstar status, Ajay had once remarked, “I’ve never been bothered about the superstar status. The one thing that I learned from my father (Veeru Devgn, a renowned fight master in Bollywood) was, to be honest with your work. I have been very lucky. There’s never been any situation where I had to struggle or wait for work. I have got more than enough work, which I even had to refuse sometimes.” In the same media interaction, he had also talked about being linked up to his co-stars, “I won't say that extra-marital affairs don't happen, but at times the media misunderstands when they see two people together. But I don't give anyone a chance to link me with someone. I like my work and at home."

Well, Ajay and Kajol are pure goals and no less than that! Wishing this beautiful couple all the happiness and love!