The handsome and innocent looking, Kinshuk Mahajan of Sapna Baabul Ka...Bidaai is a popular Indian television actor with a huge fan following. After making a recent appearance in the popular show Naagin 2, he has again shot to fame with his portrayal of the character Rudra Shrivastav.

Apart from his acting skills, the actor is quite well known for his superb good looks and physique. But, alas ladies! The man is already taken. The lucky woman who holds the key to his heart is Divya Gupta, his childhood sweetheart who is his wife from the past five years. Want to know more about their pyari si love story? Let us take a trip down the memory lane.

A shy Kinshuk saw Divya, an intelligent and bold girl, for the first time in his Economics tuition class. During those times, the two were very different from each other, but Divya’s sensibility and intelligence impressed him a great deal. And, from merely being tuition buddies, they started exchanging notes.

In one of his interviews, Kinshuk shared that he wasn’t good looking in his teenage years. He used to wear glasses, had oily hair and was a silent boy, but Divya revealed that these were the things that she found cute about him. Divya shared in an interview with an online portal:

As time passed, Kinshuk even started bunking his other tuition classes so he could spend more time with her. Slowly, love was blossoming between them and they loved talking to each other all the time. As Kinshuk said in an interview:

"After the economics class I used to have other classes also which I bunked later on so that I could talk more to Divya when we headed back home. In spite of having a bicycle I used to pull it walking with her nearly for one kilometre."

Aww! Isn’t that so adorable? Divya also seconded what her husband said:

"We used to talk a lot outside my house, and even after getting home we used to feel the need to talk to each other".

Teachers' Day might not be special for every couple, but for Kinshuk and Divya it brings happy memories, as this is the day Kinshuk took the first step of taking their friendship to the next level. It had already been three months since they had been talking to each other and this was when Kinshuk realised that Divya was more than a friend to him.

Also Read: Significance Of Chooda And Kalire For A Punjabi Bride

So, without waiting, he conveyed his feelings to her but interestingly, Divya rejected him. Not because she did not reciprocate the feelings, she knew that she loved him, but wanted to be 200% sure before accepting her feelings for Kinshuk. Here’s an excerpt of what Kinshuk said about this:

"It was after three months that I told her about my feelings (5th September). And at first she said no because she was also confused."

Divya on the other hand, elaborated:

"After two to three months he popped up the question to me for which I said no. I really I don't know why I said that, but I knew I really loved him because I wanted to be 200% sure and not just 100%. And one fine day when we went for lunch, I told him about my feelings."

Do Check Out: 16 Annoying Things All Indian Husbands Do That Drive Their Wives Crazy

When they started going out as a couple, Divya shares that Kinshuk gave her a gift that is very dear to her. She said:

"When we were in 11th, he gave me a diary wherein he had written poems with rhyming lines about our relationship and had decorated with glitter pens and cute drawings. The gift is still a treasure for me because never have I thought that Kinshuk could do stuffs like that."

It is said that long distance relationships are hard to manage. And especially in the show business where you might have to get close to other female co-stars, it becomes even more difficult. But, this couple proved that when there’s love and trust in a relationship, things like these are irrelevant. They got married in November, 2012. Divya confidently said about her hubby in the interview:

“I believe that acting is his profession and whatever he does is a part of his job and I should give that space and have the trust in him. I know that at the end of the day, he is only mine.”

A similar view was expressed by Kinshuk when he was asked the meaning of being in a relationship. He said:

“For me a relationship means you’re exclusive to one person, giving your heart and soul to your mate.”

Their love for each other is evident in all the small things they do for each other. Take for example, when Divya shifted to Mumbai after their marriage, Kinshuk did everything to make her feel comfortable in the new city. They worked out in the same gym and enrolled for group activities so he could not only spend time with her, but also to ensure that she adjusted well to the new environment.

From childhood sweethearts to soulmates, Kinshuk and Divya’s romantic journey has been an amazing one. The couple has stayed devoted to each other despite distance, Kinshuk’s immense popularity and media speculations. After getting married in a traditional Punjabi ceremony in 2011, the couple continue to live a blissfully happy married life and we wish their love just increases multi-fold with each passing day. 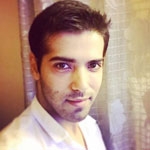