On May 27, 2020, Shah Rukh Khan and Gauri Khan’s not-so-little-anymore kiddo, AbRam Khan turned 7 and his lockdown birthday celebrations included everything he loves to do. Check out the video. 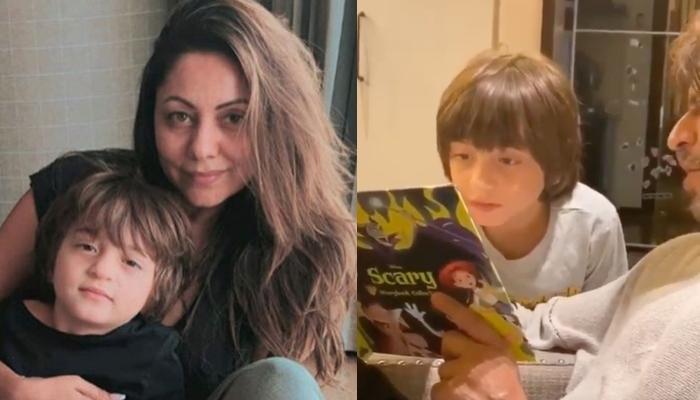 A few days back, we had seen how Ayushmann Khurrana and Tahira Kashyap Khurrana had left no stone unturned to make their daughter, Varushka Khurrana’s birthday special by working on making props and décor materials from days before by recycling stuff for the quarantine party. Then Sameera Reddy had given a glimpse of how she had gone the basic road to make her son, Hans Vardhe’s birthday special with the homemade décor, cake and hugs. On May 27, 2020, Shah Rukh Khan and Gauri Khan’s little bundle of joy, AbRam Khan had turned 7 and everyone wanted to know how the Khan family made his lockdown birthday special. (Also Read: Suhana Khan Turns Into Princess Jasmine In Her Unseen Birthday Picture, Reveals Her Nickname)

It was in 2013 when Shah Rukh Khan and Gauri Khan had announced the arrival of their third child in their lives via surrogacy. And finally, in 2014, Shah Rukh had shared the first-ever picture of his little bundle of joy, which had taken the internet by the storm. One look at the junior Khan and we could not take our mind off the uncanny resemblance that he shares with his father. Shah Rukh had wished everyone on Eid and had written, “Eid Al Adha Mubarak to everyone. May all have the happiness that life has to offer. The littlest one wishes you too.”

On May 27, 2020, Shah Rukh Khan and Gauri Khan’s not-so-little-anymore kiddo, AbRam Khan turned 7 and his lockdown birthday celebrations included everything he loves to do. While we had waited for the entire day to know how the Khans are celebrating AbRam’s seventh birthday at home, finally a while back, Gauri gave us a glimpse of the same. Posting a video, Gauri wrote, “Listening to ‘scary’ stories. Birthday celebrations with his favourite book, his favourite song and his favourite person...” as the caption.

Last year when AbRam Khan had turned 6 on May 27, 2019, his star parents, Shah Rukh Khan and Gauri Khan had organised a Marvel-themed bash for the birthday boy. A few days after the birthday bash, Shah Rukh had delighted his fans with the pictures of the brother-sister trio, Aryan Khan, Suhana Khan and AbRam Khan from the little one’s party. Sharing two sunkissed pictures of them from the bash, the doting daddy had written, “My Trio of Sugar & Spice & everything Nice....and oh yeah!  Gauri’s too.” And he had captioned the other post as, “Another sweet picture from AbRam’s birthday party...#fathersloveoverload.” (Also Read: Karan Johar Asked Yash And Roohi To Choose From AbRam And Taimur To Play With Next [Video Inside])

Shah Rukh Khan and Gauri Khan often delight their fans with sneak peeks into their family life with kids, Aryan Khan, Suhana Khan and AbRam Khan. Last year in January, Shah Rukh had posted two pictures of AbRam on his IG handle. In the first one, Shah Rukh can be seen holding a winning certificate where he is wearing a medal and it looks like his little one, AbRam had won some competition in his school. In the second picture, AbRam is seated on Aryan's lap and the brothers are watching something on their gadget. For the caption, Shah Rukh had played with words and had written, "Winning is only half of it... Having fun is the other half!! Playing is All of it....” The Playboys’ mantra."

Do you know AbRam Khan thinks that Amitabh Bachchan is Shah Rukh Khan’s father? Yes, in a picture shared by Big B had him, daughter Shweta Bachchan Nanda and little AbRam shaking hands with his ‘grandfather’! Posting the picture, Mr Bachchan had written, “and this be little Abram, Shah Rukh’s little one .. who thinks , believes and is convinced beyond any doubt, that I am his Fathers FATHER .. and wonders why Shahrukh’s father does not stay with him !!!”

AbRam Khan’s mommy, Gauri Khan had reposted the same picture and had captioned it as “Couldn’t resist reposting this image.” SRK had commented on the picture and had invited Sr. Bachchan to play ‘Doodle Jump’ with AbRam. His comment could be read as “Sir Aaya Karo na! Please stay at home with AbRam on Saturdays atleast.. He has some really amazing games on his ipad...u can doodle jump with him!” (Also Read: Shah Rukh Khan Recalls The Year When His Pretty Girl Suhana Khan Taught Him The Beauty Of Fatherhood)

We wish little AbRam an eternity of happiness and love with his ‘favourites’!