We all know the infamous story of 90s ex-couple Abhishek Bachchan and Karisma Kapoor. Recently, we stumbled upon a picture of the Kapoor and Bachchan duo from an award function. 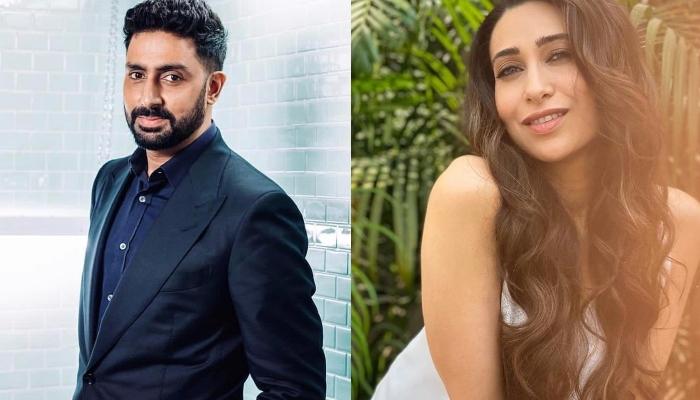 We all had a love story that never got completed, and Bollywood is also a land of unrequited love and broken marriages. In the 90s, when social media wasn't invented yet, celebrities used to do press conferences to announce the new milestones in their life. While some celebrities used to hide their love life, some used to celebrate it. And Bollywood's ex-couple, Abhishek Bachchan and Karisma Kapoor's family were from the latter, who had celebrated the high-profile engagement of the ex-duo. (Recommend Read: Manish Raisinghan And Sangeita Chauhaan Get Married In An Intimate Gurudwara Wedding [Pics-Videos])

It was in the year 2000 when Abhishek Bachchan had debuted with J.P. Dutta-directed war drama, Refugee opposite his ex-girlfriend, Karisma Kapoor's younger sister, Kareena Kapoor Khan. He was instantly hailed as the next big thing, and Abhishek is beautifully living up to his father's legacy. But apart from his amazing acting skills, it was his love story with Karisma that had then made it to the headlines of every leading newspaper. However, destiny had other plans and the duo had called off their wedding. and seven-years later Abhishek found his perfect partner in Aishwarya Rai.

On June 30, 2020, Abhishek and Kareena completed 20-years in the film industry and everyone is remembering the success of Refugee. While Kareena posted a picture of her first shot from the film, singer, Anu Malik shared an unseen picture with the Kapoors and the Bachchans from an award show. In the picture, we can see Anu Malik posing with Abhishek, who was hugging his mother, Jaya Bachchan, while Karisma Kapoor was standing with Amitabh Bachchan. Alongside it, the singer wrote, "Wow! Refugee 20 years. My first national award. Thank you J P saab.."

Talking about how love brewed between Abhishek and Karisma, the duo had met each other at the former's sister, Shweta Bachchan's wedding in 1997. However, it was after 5-years, their relationship had caught the media attention and everyone was curious to know when they will tie the knot. Till date, no one knows what was the reason behind their breakup. However, the ex-couple are living a happy life. While Karisma is a happy single mom, Abhishek is with his true love, Aishwarya Rai Bachchan. (Also Read: Shekhar Suman Worries For Son, Adhyayan Suman, Shockingly Reveals He Had Suicidal Phase In The Past)

In a media interaction, Jaya Bachchan had once shared that families were not responsible for calling off Abhishek and Karisma's wedding. She had said, "She has the blood and genes of Kapoors. Her father and I were buddies, they had a good relationship with my husband. So, one must not always blame their families." (Don't Miss: Madhuri Dixit Turns Hairstylist For Her Hubby, Sriram Nene, Says Had Fun Experimenting [Pic Inside])

Well, Karisma and Abhishek picture definitely makes us remember the good old days of the '90s!