As Agastya Nanda turned 20 on November 23, 2020, his 'mamu', Abhishek Bachchan posted a dapper picture of his nephew to wish him on his birthday. 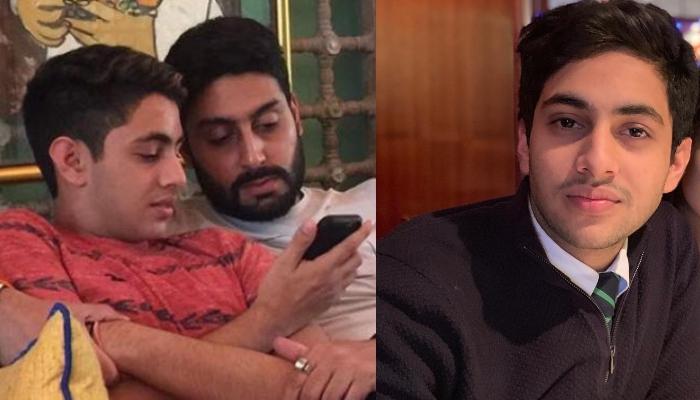 Just as much overjoyed and happy you are to become a parent yourself, you are excited when your sister/brother embraces parenthood. The moment you become mama/maasi, the little one becomes the centre of your world. The memories you create with them during their childhood and watching them grow into a wonderful human being is a proud moment for you. You remain the forever good cop and your niece/nephew come to you when they need a friend. Abhishek Bachchan is that forever good cop for his niece and nephew, Navya Naveli Nanda and Agastya Nanda. (Also Read: Kangana Ranaut Recalls How Her Nephew, Prithvi Had Made Her Teary-Eyed Before She Left For The Shoot)

It was on February 16, 1997, when Shweta Bachchan, daughter of Amitabh Bachchan and Jaya Bachchan, had tied the knot with Nikhil Nanda, the Escorts Group businessman and grandson of late Raj Kapoor. The same year, Shweta and Nikhil had embraced parenthood with the arrival of a little angel, Navya Naveli Nanda. Three years later, in 2000, Shweta and Nikhil were visited by the stork once again and their family got completed with the arrival of their son, Agastya Nanda. Navya and Agastya are the heartbeats of the Bachchan clan and are showered with love and pampering.

As Agastya Nanda turned 20 on November 23, 2020, his mamu, Abhishek Bachchan posted a dapper picture of his nephew to wish him on his birthday. Abhishek posted a picture of Agastya from his graduation last year and wrote, “Happy 20th birthday Agastya #coolestkidontheblock.” For the unversed, it was in May 2019 when Agastya had graduated from Sevenoaks School, London and to mark the same, Abhishek had congratulated his nephew with a lovely picture. Abhishek had captioned his post as "Congratulations on your graduation Agastya. You're growing up too fast and way too tall!! #ProudMamu."

Agastya Nanda’s proud grandfather, Amitabh Bachchan had expressed his feelings on how his grandson had grown up to be a spanking big boy with British looks. Big B had written in his blog, "Another (grandchild) several miles away graduates and it's a moment of great pride and joy... The family is all with him and there are frequent messages and pictures flying about. But I mean, he was just born the other day and we had all been around his mother at Breach Candy Hospital, and carried him into the world with affection and love... And there he is today, spanking big boy, carnation on his suit lapel, hair flushed back and looking very British... And taller than everyone else in the family. Err...almost... still have to see where he measures against Abhishek and me." (Also Read: Anushka Sharma Is A Sight To Behold As She Posts A Glimpse Of Pregnancy Diaries, Flaunting Baby Bump)

It was only a few days ago when Agastya Nanda had made his Instagram debut and his quirky profile had grabbed everyone’s attention. Agastya’s profile has his not-so-usual pictures with his sister, Navya Naveli Nanda and his friends. His Instagram profile has the appearance of a scrapbook, and mostly all of the pictures are liked by his mama, Abhishek Bachchan. In one of the pictures with the words “I believe in the hustle, I don’t f**k with luck” written next to him, Navya had commented, “Pls explain. Are you trying to be edgy?” Alia Bhatt had replied on Navya’s comment, “Hahaha exactly please explain your actions.” Suhana too, had commented on one of Agastya’s pictures, "Unfollowing." (Also Read: Ziva Singh Dhoni And Ahil Sharma Watching Penguins Will Remind You Of The Good Old Childhood Days)