Abhishek walked down the memory lane and reminisced how he used to dream of working with his father and megastar, Amitabh Bachchan. Scroll down to know more! Not many people realise this, but even though superstar, Abhishek Bachchan's career trajectory didn't turn out to be what was expected from the son of a living legend, Amitabh Bachchan, Abhishek didn't let the superstardom of his father overshadow him! He made his identity in the industry on his own and undoubtedly he is one of the most underrated actors in Bollywood. Abhishek Bachchan imparts different energy on the screen whenever he appears and is a treat to the eyes. We haven't been quite able to put a finger on what, but there's something special about him that other actors don't have! (Recommended Read: Riddhima Kapoor Sahni Reveals She Still Fights With Her Brother, Ranbir Kapoor All The Time)

Abhishek Bachchan is celebrating two decades of being a part of the Bollywood industry and looking back, some of the iconic performances of Abhishek had come in the year 2005. Including Sarkar, Bunty Aur Babli, Dus, Bluffmaster and a lot more. The year 2005 was Abhishek Bachchan's year and is marked as him some of his career-best performances. Remembering the same, Abhishek walked down the memory lane and reminisced how he was offered back to back two movies with his father and megastar, Amitabh Bachchan. Scroll down to know more! 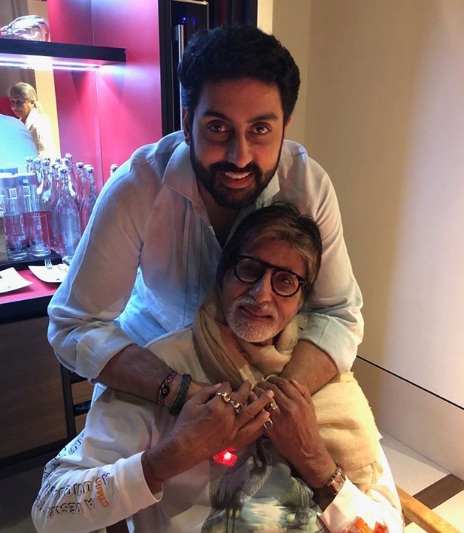 Abhishek Bachchan took to his Instagram handle and shared a video comprising of his filmy journey in the year 2005, with a heartfelt note, describing how his ultimate dream of working with the living legend, Amitabh Bachchan had come true. His caption can be read as "#RoadTo20 Year-2005. The year the flood gates opened! #Buntyaurbabli #Sarkar #Dus #Antarmahal #Bluffmaster. Wow. All these films in a year. Any actor will tell you that it is a dream of theirs to act with “The Amitabh Bachchan”, in 2005 this fan got not one but two opportunities. There is so much to share about all the films I did in 2005... perhaps, some other time and some other medium. For now, as I reminisce... I’m eternally grateful to get the opportunity to be a part of these films. Never had I imagined that I would be a part of even one “career defining movie” ( you always hope ) to be a part of 5, that too in the same year is unbelievable! @amitabhbachchan." Check out the video below:

Abhishek Bachchan, while remembering his 20-year-long journey in Bollywood, had earlier recalled a hilarious incident, where he and his childhood best friend, producer Goldie Behl were thrown off from the sets of film Pukar. The film was directed by Goldie Behl's father, Ramesh Behl and the lead actor was Abhishek Bachchan's father, the great, Amitabh Bachchan! Recalling anecdotes of his 20-year-long journey in the film industry, he had shared a video of his 2001 film, Bas Itna Sa Khwab Hai, and had written about the hilarious incident in the caption, "#RoadTo20 The year- 2001 #BasItnaSaKhwaabHai Two childhood best friends who wanted to make a movie together ever since they were thrown off the set of their fathers' film for breaking the props because as a 5 yr old and 6 yr old we got excited seeing fake swords on set. The movie was #Pukar and @goldiebehl ‘s father ( the great Ramesh Behl) was the Director and my dad the lead. During the climax shoot in Goa, we chanced upon the fake swords and started playing with them and then eventually breaking them. We were promptly sent back to the crew hotel. 19 yrs later we made our first film together. @goldiebehl @srishtibehlarya @amitabhbachchan." (You May Also Like: 'Kumkum Bhagya' Fame, Shikha Singh Welcomes A Baby Girl, Announces Her Name Decided On Baby-moon)

The junior Bachchan had felt elated on thriving in the industry for 20 years! To celebrate the same, he had posted a video and had written a heartfelt note in the caption, which could be read as "#RoadTo20 It’s hard to believe that at the end of this month I will complete 20yrs as an actor! It’s been a wonderful journey thus far. I’m not one to look back and dwell on the past, but, once in a while, it’s nice to remember the good and (sometimes) bad times. #RoadTo20 is an attempt to take you through these 20 years of my life as an actor. Maybe relive some of the memories and experiences. It is a celebration of all the people that have made all this possible. The countless people who had faith and belief in a tall, slightly awkward, foreign returned 22yr old boy who had a lifelong dream... one that he has spent the last 20 years living." Abhishek's doting sister, Shweta Bachchan Nanda had commented, "Many more to come G onwards and upwards" followed by a red heart emoji. (Also Read: Zoya Akhtar Shares Strong Message Written On The Diary Given By Her Mother, Honey Irani For Everyone)

Well, we're lucky to have enjoyed the magical on-screen presence of Abhishek Bachchan!