Abhishek Bachchan Keeps Karva Chauth Fast For Aishwarya Rai Bachchan, Has A Message For All Husbands

Abhishek Bachchan Keeps Karva Chauth Fast For Aishwarya Rai Bachchan, Has A Message For All Husbands 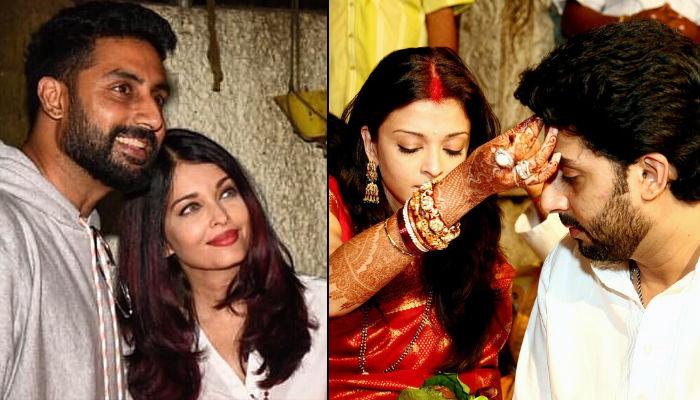 It’s been 11 years since Abhishek Bachchan and Aishwarya Rai became husband and wife back in 2007, and in these years, their love for each other has just got stronger with each passing day. Aishwarya and Abhishek leave no chance to sing praises for each other and have been giving us major relationship goals. While shooting for Umrao Jaan, love blossomed between Abhishek and Aishwarya, then during Dhoom 2, their relationship was cemented and finally, love was confessed on an outdoor shoot of Guru. (Also Read: The Story Behind Why Karva Chauth Is Celebrated By Indian Women And Why They Dress Up For The Fast)

On October 27, 2018, when the ladies are all geared up to keep the Karva Chauth fast for their husbands, Abhishek has an advice to all the husbands out there. And after reading Abhishek’s tweet, you will agree with us when we say that the award for the ideal husband goes to him. Abhishek took to Twitter to share a message for all husbands on Karva Chauth and tweeted, “#KarvaChauth, good luck ladies.... And the dutiful husbands who should also be fasting with their wives! I do.”

Isn’t that adorable and romantic? And now, don’t you agree with us? This won’t be the first year when Abhishek will keep Karva Chauth fast with his wife, Aishwarya. In an interview earlier, Abhishek had said, “I don’t believe in it (Karva Chauth), but if my wife is doing something for my health, then it is my duty to be with her. That’s why I will be flying to be with my wife.”

In 2013, Abhishek was out of the country for some professional commitments and his wife, Aishwarya fulfilled the traditional requirements of Karva Chauth through Skype with father-in-law Amitabh Bachchan and mother-in-law Jaya Bachchan. Big B had then tweeted, "Abhishek out of country on shoot .. so face of husband seen through Skype, for Karvachauth by Aishwarya .. what times we live in!!" And Abhishek wrote, “My 1st Karwa Chawth away from the Mrs. Thank god for Facetime!."

Just a day before Karva Chauth, Abhishek had a ‘blast from the past’ moment. Abhishek Bachchan treated his fans with a throwback picture of a special moment with his lovely wife, Aishwarya Rai Bachchan which has got us going all “aww”! Abhishek shared a picture on his Instagram that was taken during a press conference of the 2008 'Unforgettable Tour'. Abhishek and Aishwarya were married for a little over a year at that time. (Also Read: Prince Narula Applies Mehendi To Yuvika Chaudhary's Hands On Her First Karva Chauth, Video Inside)

The Manmarziyan actor captioned the following picture as, “#FlashbackFriday During a press conference while we were on the "Unforgettable Tour" back in 2008. Think this was in Atlantic City. #TheMrs.”

Revealing the first time she saw Junior Bachchan, Aishwarya shared during the promotions of her film, Ae Dil Hai Mushkil, “I first met Abhishek Bachchan in the winter of 1990. We were shooting a cover picture for the magazine I edited and had gone across to discuss details with Jaya Bachchan. Abhishek, then just a teenager, was playing with a friend in the living room of ‘Prateeksha’, their old home in Juhu. He saw me enter the room with his mother and promptly folded his hands into a namaste. As we walked around the place confirming spots for the next day’s shoot, his eyes followed us... large expressive eyes, full of trust.”

She further added, “During the photo shoot I discovered that out of all the Bachchans, Abhishek was the most awkward in front of the camera and I had never imagined that he would one day choose acting as his career.” Reminiscing the first time he met Aishwarya, Abhishek recalled, “I first met Aishwarya Rai in the summer of 1995. She was recently crowned the Miss World and had become the pride of India. Fans thronged at her Bandra residence for a mere glimpse and filmmakers clamoured to sign her as their leading lady.”

Abhishek Bachchan further went on to say, “We bumped into each other again in the green lawns of Hotel Leela Kempinski. The occasion was the launch of Amitabh Bachchan Corporation Ltd. All the top filmmakers, music barons and stars were invited and Aishwarya Rai was there too, not in the spotlight but lurking somewhere in a dark corner accompanied by her mother Vrinda. Aishwarya looked dazzling but ill-at-ease in her new surroundings. People passing by stared at her but were wary of approaching her. She stayed aloof. Would she be able to fit into the jungle world called films? I was not sure.”

At India Today Conclave, Abhishek praised his lovely wife and said, “She is superwoman. She is unbelievably dedicated to all that she does. She has always been like that. Even when I worked with her at the start of my career, as a co-star, as a partner and then my wife. She is very focused about what she does as a professional and as a mother, as a daughter and as a daughter-in-law. She is 100% in everything I don’t know how she manages it.” (Also Read: Bharti Singh Reveals Her First Karva Chauth Plans, Hubby Haarsh Limbachiyaa Pledges To Fast)

Abhishek Bachchan is truly an inspiration for all the husbands out there. Is your husband too, keeping Karva Chauth fast with you? Let us know in the comments section below.