Aarti Chabria Is Enjoying Her Beach Honeymoon In Maldives With Husband, Visharad, Pictures Inside

Aarti Chabria Is Enjoying Her Beach Honeymoon In Maldives With Husband, Visharad, Pictures Inside

After all the 'shaadi taam-jham', actress Aarti Chabria is enjoying her alone time with husband, Visharad Beedassy in the midst of beaches and sun in the Maldives! 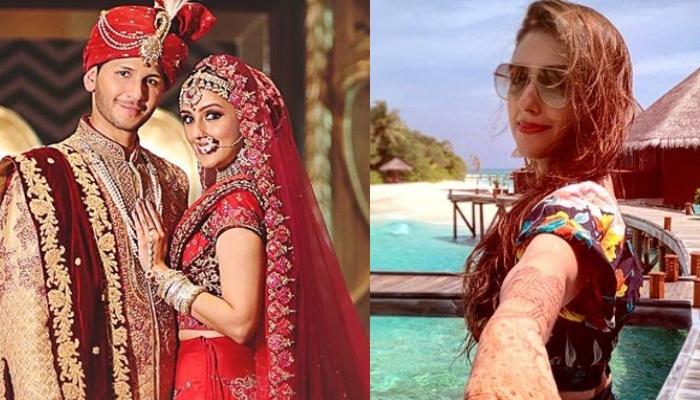 Getting married is one of the most beautiful experiences, but all the 'shaadi taam-jhaam' often takes a toll on our head. But there isn't anything that an exotic vacation cannot solve. And actress, Aarti Chabria is currently enjoying her alone time away from the media glare with husband, Visharad Beedassy. (Recommend Read: Bride Wore Exactly Same Sabyasachi Lehenga That Anushka Sharma Wore On Her Wedding, Looks Gorgeous)

Before we take you further into the story, let us take a recap of their wedding. Aarti got married to a Mauritius-based chartered accountant, Visharad in a private ceremony on June 24, 2019. For those who don't remember, the couple made headlines when they had exchanged the rings in March this year.

Recently, in an interview with SpotboyE, Aarti talked in detail about her wedding. She shared how she met her husband, and stated, "Well, it was quite an arranged match. We met through some members of our respective families. He is largely based in Perth. He came down to Mumbai and was at my place with me and my family for 4 days. Somehow I soon knew that he was the man I wanted to spend the rest of my life with. He had left for Perth and I committed to him while he was in transit."

She further added, "We got engaged in March. The rest, as they say, is history. To tell you the truth, I never believed that I would go in for an arranged marriage. I am a die-hard romantic." Aarti also revealed that she will be shuttling in Perth, Mauritius and Mumbai, "Well, Visharad spends almost equivalent time in Perth and Mauritius both. So, we will be shuttling between Perth, Mauritius and Mumbai. I will continue to work, of course. Work will not take a backseat. I am not going anywhere." (Also Read: Virat Kohli's Adorable Message For Anushka Sharma Proves That He Is Always In Complete Awe Of Her)

On June 27, 2019, Aarti took to her Instagram handle and had shared a series of her honeymoon pictures from the Maldives and we totally loved it. Take a look at the picture below:

For the longest time, Aarti's wedding rumours were making rounds, in a throwback interview, Aarti had talked about her marriage rumours. She had said, “I heard a lot of rumours about my marriage. In fact, some said she is married. There is a boyfriend crunch here and people are talking about marriage!” She had further added, “Absolutely not, I am not getting married right now, I would love to, and my parents would love me to. But right now I don't have that Mr. Right in my life as yet. So, it's going to be a while before I settle down.”

In yet interview before she had met Visharad, Aarti had talked about her single status, and had shared, “Well, I'm waiting for someone to sweep me off my feet! I am a true-blue romantic, so I'm in love with the concept of love. And it's so precious that I'm also very possessive about sharing it with just about anyone. It has to be someone really special for me.” (Don't Miss: Shahid Kapoor's Mom Neliima Defends His Character In 'Kabir Singh', Lashes Out At All Who Judged)

We cannot wait to see more pictures from Aarti and Visharad's pictures! What about you?