Aamir Khan Wrote A Letter With Blood For First Wife, Got Separated, Married His Assistant Director

Aamir Khan Wrote A Letter With Blood For First Wife, Got Separated, Married His Assistant Director 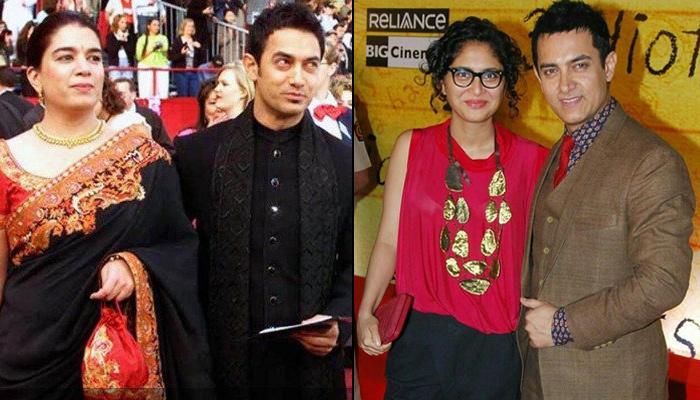 Rightly termed as the ‘Mr.Perfectionist’ of Bollywood, Aamir Khan’s taste in films is unique and so is his personal life. Aamir has been both vocal and tight-lipped about his relationships and personal life, as and when need be. From writing a love letter with blood, to getting rejected by his first love and then finally marrying her only to be separated after 16 years, multiple linkup rumours with co-stars and finally getting married to his second dig in love, Aamir Khan’s love life is no less than a Bollywood masala movie! Want to know more? Follow the article’s trail!

Recommended Read: Feroz Khan Married A Single Mother, Left Her And Children For An Air Hostess But Never Married Her

The Aamir Khan we know

We are talking about the early 80s here. Aamir began his career in Bollywood as a complete chocolate boy with a huge female fan following. But what led him to his career that we are talking about here? Aamir did not come from a star-studded background. He himself once shared that he was a ‘lone ranger’ when he stepped into the industry. Aamir earned his living by doing small roles in films and plays. Aamir had worked as an assistant director at a film, along with his maternal uncle, Nasir Hussain. It was then, that his Nasir’s son, Mansoor Khan happened to see his film’s lead (Raj) in Aamir and the rest is something that we already know! Aamir recent completed 30 years in Bollywood. Speaking of the same, he shared in an interview:

"When I came to the film industry, I was a minority, a lone ranger. I was someone, doing films that I believed in, but the market, the host of other people did not believe in such films. Only a few of us did. I was constantly swimming against the tide. Now the time has changed. Now, these films are considered mainstream."

Speaking of how his life had changed after his first successful film, Qayamat Se Qayamat Tak where he had earned Rs 11,000, Aamir had shared:

“After Qayamat Se Qayamat Tak (first commercially hit film), though I had a successful film, did not have money to buy a car. I used to use public transport until I started getting mobbed by people who recognised me in public.”

Well, this is one extremely filmy story! Aamir and Reena Dutta used to live in just the opposite buildings. And their windows were the exact opposites of each other and both used to stare at one another from there. It was Aamir, who first fell for Reena. He had tried multiple times to reach out to her and put forward his love for her, but the harder he tried, the more rejections he started getting from Reena. It was also reported that Aamir was so madly into love with Reena that he had even written her a love letter with his blood! But this further aggravated the situation and Reena asked him to never indulge in such things again and Aamir too, realised that this is something that one must never do.

However, nothing stopped Aamir from trying harder, but he was slowly losing hope of any luck with Reena. Just when he made up his mind to stop persuading her further, Reena reciprocated. It was only on April 18, 1986 that Aamir and Reena got married, much to a religion based disharmony between her parents. Thus, the duo eloped and tied the knot. Soon after, Aamir and Reena were blessed with two children, Junaid and Ira. In a 1999 throwback interview, Aamir spoke about their relationship:

“I spent a little more time than natural in front of my window. I just told her that I loved her and I hoped that she felt the same about me.”

You would probably think that a love received after so much perseverance should have stayed strong and it surely did. It is often said that linkup reports with his co-stars largely affected Reena and Aamir’s marriage. However, this is just a prediction and the couple has largely remained tight-lipped about the same. Aamir and Reena had a peaceful divorce in 2002 with no ugly spats or arguments. The ex-couple still continue to be in a very healthy relationship and still consult each other when it comes to taking any decisions about their children. Aamir even celebrated Reena's 50th birthday last year (2017). In an interview, he had shared:

"Reena is extremely important and is very much a part of the family and she will always be... From legal point of view we are divorced but I think the bond that we share is not going to break with a piece of paper.

But like anyone, the divorce had a heavy impact on Aamir. In an interview, he had stated:

“Probably the most traumatic period has been my divorce, not just for me but for everybody involved, I imagine. I can't think of any other significant low.”

In a 2003 interview, Aamir finally opened up properly on his divorce. He shared:

“No. Reena and I were married for 16 years. We grew up together as we both were very young when we got married. Our separation was tough on both of us. It was a special relationship and is still very close to my heart. I was alone for three to four years and then I met Kiran. I didn’t even work for almost two years as I was coping with it. I am very emotional. When we decided to part ways, Reena and I first explained the situation to our kids. My children, Junaid and Ira, are close to Kiran and Azad.”

Linkup with a British journalist

A few years had passed after his divorce when suddenly Aamir hit the headlines again. This time it was not for a movie of his, but for linkup rumours with a British journalist, Jessica Hines. The duo had apparently met during the shooting of Ghulam and the two went onto fall for each other and started staying together. It is also said that Aamir has a love child with Jessica, named Jaan. Soon things started turning sour between the alleged couple and Jessica moved back to London. Grapevine is abuzz that she is raising the child all by herself. Not much is heard or said of their relationship anymore.

Going for a second chance in love

You all must have been aware of Aamir’s one of the most promising works, Lagaan. Aamir’s first wife Reena had turned producer for the film even when things were almost at an end for them. This is where Aamir met his now wife Kiran Rao, who was working as an assistant director to the film’s director, Ashutosh Gowariker. Kiran herself had shared the same in an interview:

“We connected on the set of Lagaan and again on an ad commercial that he was doing with Ashutosh Gowariker that I was assisting on. We hung out a lot together and became 2 am friends. We started seeing each other in 2004…. We like each other’s company and our friendship is still the basis of our relationship. I moved in with him and neither of us was hung up on marriage. After a year of living together, we decided to get married for two reasons.”

Aamir is now happily married to Kiran Rao and the couple is blessed with an adorable son, Azad via surrogacy. Their love-filled PDA pictures and videos give millions of goals to all!

Linkup with a recent co-star half his age

Have you been able to get over Aamir’s massive hit, Dangal? If your answer to this question is yes, then the beautiful bond he shared with his co-star, Fatima Sana Shaikh must not have gone unnoticed. Rumours also had it that Aamir and Fatima’s growing closeness was upsetting Kiran, although none of the stars chose to comment on the issue. However, the reel life Geeta Kumari Phogat said that she considers Aamir as her ‘guru and guide’. This is what she had to say:

“He's everything rolled into one, a friend, a guru and a guide. I can talk to him about anything. I can also discuss with him things like, I have had crush on someone, so please tell me what to do'. Sanya (Malhotra) and I go to him for all our love-related problems, and he solves them for us."

Well, in a nutshell, this is all about the love life of Aamir Khan. Multiple turmoil and disturbances did not deter him to believe in the magic of love all over again, and thus, the Universe worked for him and helped him find love for the second time. How did you like Aamir Khan’s story? Leave us a comment in the box below.