Bollywood actor, Aamir Khan and his first wife, Reena Datta were blessed with a daughter, Ira Khan, in 1997. The star kid enjoys a massive fan-following,as she is an internet sensation. Instead of following in the footsteps of her actor-father, Aamir, Ira carved a niche for herself behind the camera as a budding director. For the unversed, it was in 2019, when Ira had made her directorial debut with a theatre production, Euripides' Medea.

On the personal front, Ira Khan is madly in love with her father, Aamir Khan's fitness coach, Nupur Shikhare. The adorable couple often shares glimpses of their lovey-dovey moments with each other on their IG handles, sending their fans into a collective meltdown. However, now, Nupur and Ira have got engaged, and their fans can't control their emotions.

Also Read: Shweta Tiwari Reveals Why Her Daughter, Palak Chose To Be An Assistant Director Before An Actress

On September 22, 2022, Ira Khan and Nupur Shikhare shared a collaborative post on their respective IG handles and delighted their fans with the news of their engagement. The much-in-love couple shared a video of the dreamy proposal and left their massive fanbase in awe of their chemistry with each other. Being a 'filmy' boyfriend, Nupur Shikhare proposed to his ladylove, Ira in Italy as he took part in the famous show, Iron Man Italy Show.

In the video, we can see Nupur running towards his girlfriend, Ira Khan, donning his race costume, and the two shared a kiss. Nupur and Ira left their audience gushing over them with their PDA moment. Well, that's not it! The doting boyfriend, then went on his knees and pulled out a ring to propose to Ira for marriage. To everyone's delight, Ira said 'Yes' and she couldn't control her excitement. Sharing the precious video of the dream proposal, Ira wrote:

May 31, 2022, marked the second anniversary of Ira and Nupur’s happy love relationship. The doting girlfriend had taken to her IG handle and shared a series of pictures with her boyfriend, Nupur Shikhare to celebrate the special day. In the unseen glimpses clicked at her 25th birthday bash, the much-in-love couple was seen having a gala time in the pool. Sharing the love-filled pictures, Ira had talked about her genuine love for Nupur in the caption, which could be read as:

"It's actually been two years but it's feels like it was always like this. I love you. As truly and genuinely as I am capable of loving. (hugging and kissing face emoji) for everything." 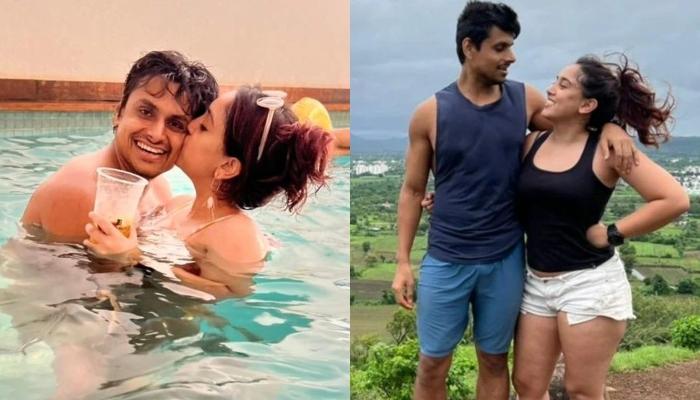 There is something so special about love stories that they always manage to strike a chord with our hearts. Filled with happiness, joy, love, care, compassion, arguments, and a lot of tears, love stories are indeed a treat to watch and listen about. However, not just in reel life, even