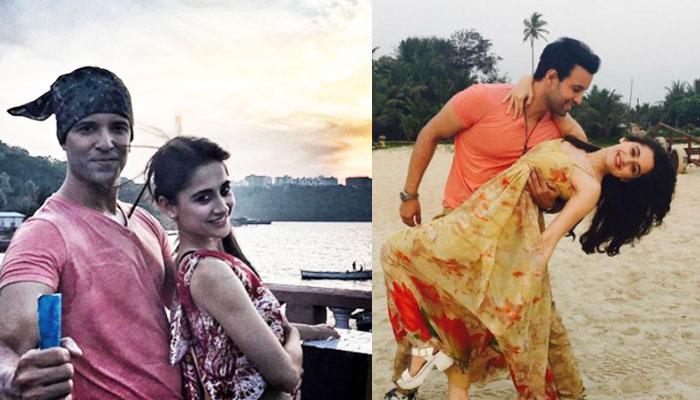 Whenever one is asked to name the most romantic and non-controversial couple of the telly world, the name of Aamir Ali and Sanjeeda Sheikh is sure to come up. This jodi has the most pleasant love story and journey. From being just friends to becoming a happily married couple, they have accomplished their personal goals while maintaining their careers pretty well. Their sweet and simple love story will compel you to believe that love is a beautiful thing to happen. So, let us take you through the same.

Their journey started as 'just friends' where Aamir got attracted to her beauty and Sanjeeda got attracted to his sweetness. However, they never imagined that their first casual date as friends would lead to a long-lasting courtship. Recalling her first date, Sanjeeda says:

“It was very informal since we were just friends then. We went for dinner and were later joined by a couple of friends for the movie. So it was very casual nothing romantic or out of the blue. I wonder now if that really was a date!”

Aamir and Sanjeeda are the ones who believe in true love, but they also believe that it does not happen overnight. For them, it is the purest feeling in the world and thus, time is needed for it to develop between two individuals. Aamir describes the same as he says:

“It (love) is not something that happens overnight. True romance can only bloom over time.”

Love is something that makes you feel happy and scared at the same time. Same thing happened with Aamir as well. This romantic hunk was madly in love with Sanjeeda, but was afraid of taking their relationship to the next level. However, one day that fear was gone and he asked Sanjeeda one of the most important questions of her life. Explaining those moments, Aamir said:

“Sanjeeda always wanted to marry me, but I was s*** scared about marriage. I was happy with the way our relationship was going. The mere thought of marriage gave me sleepless nights though my mom used to poke me almost every day to get married to Sanjeeda. And after being together for a very long time ek din mera woh darr finally chala gaya, and it was that day when I surprised her by proposing to her on my knees. Earlier we used to discuss marriage, but very rarely. So she was completely surprised.”

And yes, Sanjeeda was completely oblivious to the fact that Aamir is planning a proposal. When it happened she was completely taken aback and tears rolled down her eyes. Giving details of the beautiful and innocent proposal, Sanjeeda says:

“I wasn’t expecting a proposal from Aamir that night, especially when he had waited long hours for my shoot to get over and I too was drained after giving back-to-back scenes that involved portraying a lot of mental traumas and crying. As I came out of my shot, he stood in front of me, went down on his knees and proposed marriage. That was it, the moment of my life.”

Recommended Read: Top 7 Bollywood Couples Who Sizzled On The Ramp Together

When two people who are madly in love with each other, are together for a very long time, they appreciate even the minutest things of their partner. Well, it applies to this lovely jodi as well. Their answers to what they like about each other will make you fall in love with them even more. Aamir gushes:

“Her happiness towards life!”

“The way he pampers me and cares for me. He always treats me like a kid and I think that's the best thing about him.”

Talking about the most special gifts that they ever received from each other, both of them have their own picks. For Aamir, it is:

“Happiness, she keeps me happy always and that's the best gift I could ever ask for.”

“There are lots of them; he surprises me every time on my birthday with something or the other. But yes, a diamond ring which he gave me while we were dating is the most special gift and close to my heart, I never take it off.”

Don't Miss: 14 Signs That Show Your Partner Is Absolutely Trustworthy And A Total Keeper

Sanjeeda and Aamir are very private people. They did not disclose their relationship in public for years. It was only after this jodi signed for Nach Baliye 3, the world got to know that these two are seeing each other. A shy Aamir told:

“I am a very private person. And what better stage than Nach to show to the world, that we are madly in love.”

With a great chemistry and their killer dance moves, they won Nach Baliye 3. Also, this reality show helped them decide that they are at a stage where they can take their relationship to a higher level.

The D-day and after

After seven years of courtship, Aamir and Sanjeeda uttered 'qubool hai' in a grand style on March 2, 2012, in Mumbai at the Gymkhana Club.

Following the wedding was a star-studded reception. Sanjeeda looked gorgeous in a green and silver outfit, and Aamir looked dapper in black. Many bollywood and television biggies, including Harman Baweja, Sohail Khan, and Shabbir Ahluwalia, were present to wish the newlyweds.

Take A Look: Top Bollywood Divas Who Did Not Wear Red At Their Weddings

For this couple, nothing changed much after the wedding. They are still best friends and treat each other as girlfriend and boyfriend. Explaining this, Sanjeeda says:

“Aamir and I are still boyfriend-girlfriend. The other day we were discussing how we don’t feel like husband-wife. However, the only thing that has changed after my wedding is that I get to meet my guy every day. Had I known marriage would be this simple I would have got married to him two years ago.”

The couple also shared their mantra for a happy marriage. They believe that one should be true to their feelings. Sanjeeda advises:

“Understanding between a couple is the most important thing, rest everything follows. Marriage will be happy and blissful if you understand and support each other well.”

The couple then participated in another reality show Power Couple that got aired on Sony.

So, haven't they convinced you that life is better when you are in love? Well, they surely have convinced us. Team BollywoodShaadis wishes for a blissful life for this couple.