Are you finding it difficult to decide on what to wear at your wedding reception? Then you are at the right place as we have the answer for you. When it comes to style inspiration everyone looks up to celebrities, be it of telly world or of the big screen.

Recently, many TV actresses have got hitched and have worn pretty attires on their lavish reception, giving some serious reception dress goals which you can follow easily. So, without any further ado read the following about what you can wear at your reception and look like a diva on a joyous day. 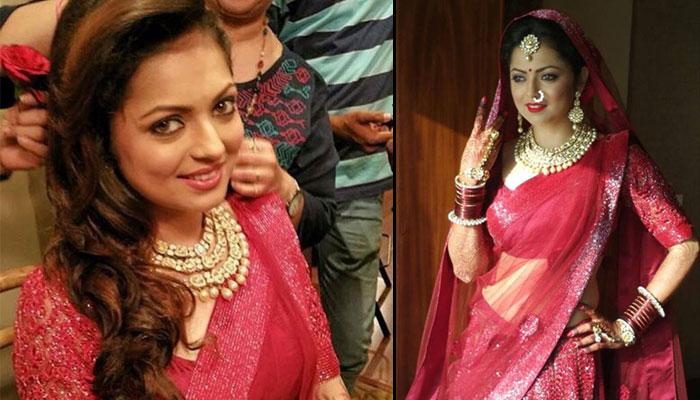 Known as the Madhubala of the telly world, actress Drashti did an unexpected thing on her reception. While many stars prefer to wear a new designer dress on their reception, this star repeated her same red wedding dress and her kundan necklace for her post-wedding celebration! But with changed hairstyle and giving her nose ring and maang teeka a pass, Drashti managed to look absolutely stunning in her red dress once again during her reception. Indeed, a clever decision. Only thing which she did not carry was her bridal veil, but nonetheless, Kratilka looked drop dead gorgeous on her special day. Dark blue velvet lehenga with bold bronze embroidery teamed with hot pink net duppatta is what actress Aamna chose to wear for her reception day. The Kahiin to Hoga star dazzled in this Manish Malhotra creation which she completed with heavy kundan neckpiece, maang teeka, earring, red chooda and updo bun with side flowers.

You may like: 15 Bollywood And Television Brides Flaunting Their Chooda In Style 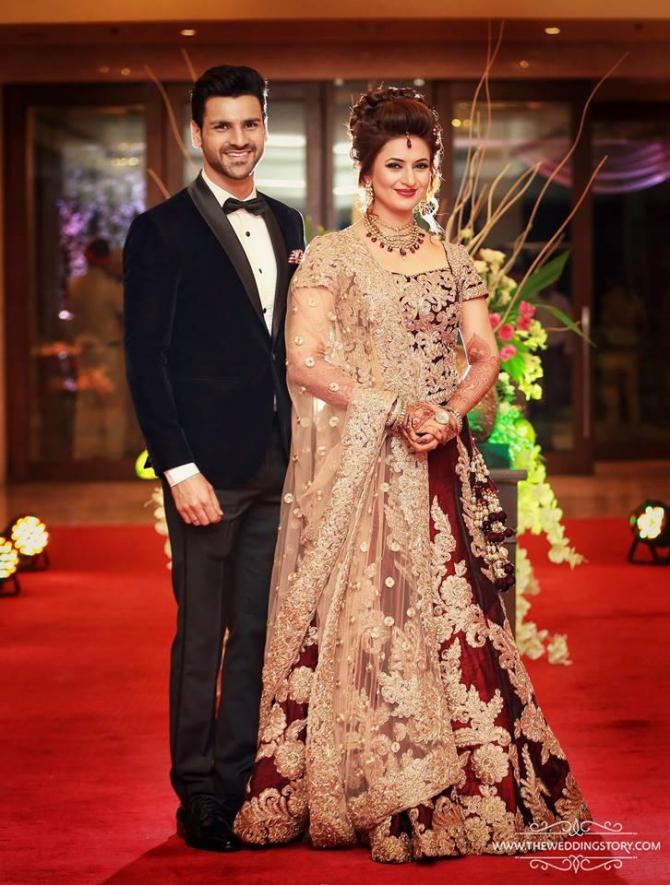 Divyanka did not have one but two wedding receptions and both the times she gave some serious reception look goals. For the first post-wedding celebration in Chandigarh, the Yeh Hai Mohabbatein star donned a traditional bridal avatar with beautiful maroon and heavy golden work lehenga, stylish hairstyle and matching jewellery. 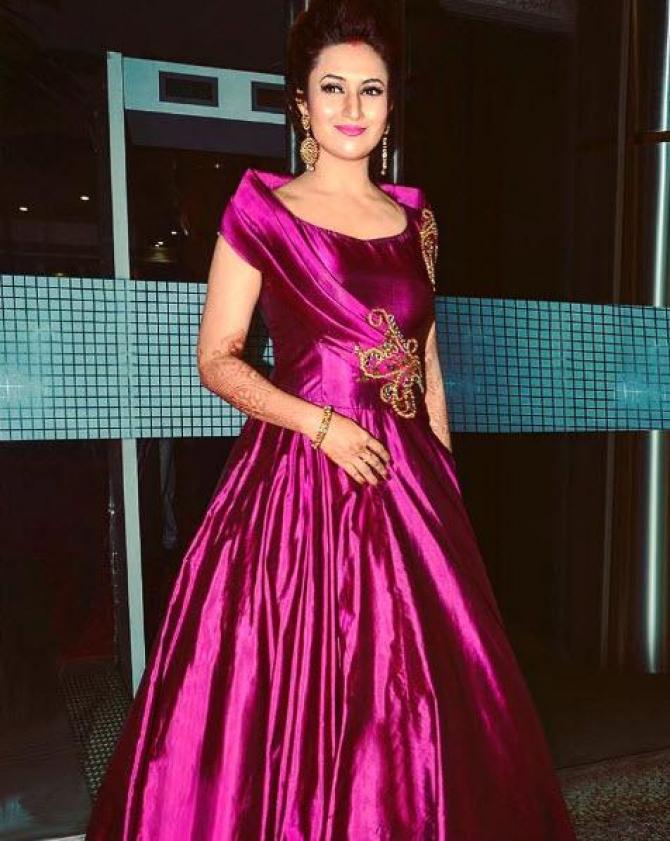 While for her second reception party in Mumbai, the actress went with the modern look and chose to wear floor length purple Kalki Fashion gown with minimal jewellery, makeup and a bun. In both the traditional and modern avatar, Divyanka looked absolutely stunning. Ek Hasina Thi star Kishwer sizzled on her reception day in Gaurav Gupta Label attire. All eyes were on her as she walked in the venue with beige coloured saree-gown with stunning embroidery in pearls and beautiful drape. She nailed the look with open wavy hair, red chooda, diamond jewellery and minimal makeup. 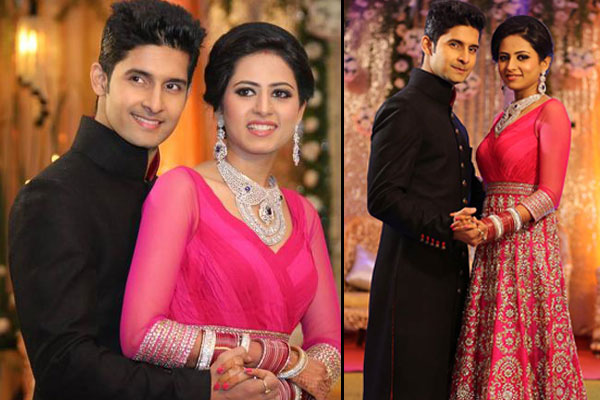 Bright pink and golden embroidered gown with a heavy diamond necklace and earring is what the Balika Vadhu actress Sargun opted to wear on her reception day. Minimal makeup and tied up hairdo completed her look. 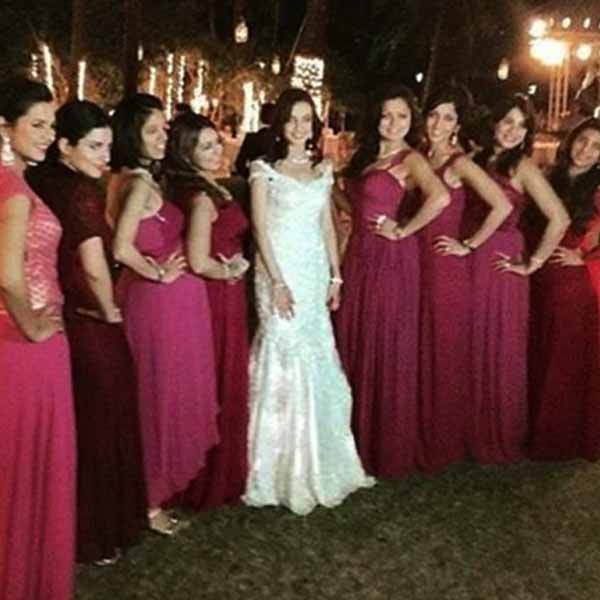 Talk of Miley Jab Hum Tum, we have one name on our lips and it’s of none other than the very vivacious and chirpy lady, Sanaya Irani. The actress tied the knot with her co-star, Mohit Sehgal in a grand destination wedding style. For her reception, the actress chose to go western way and wore a beautiful white drop shoulder gown. She completed her look with a sleek diamond jewellery and stood out amongst her bridesmaids who were in red. 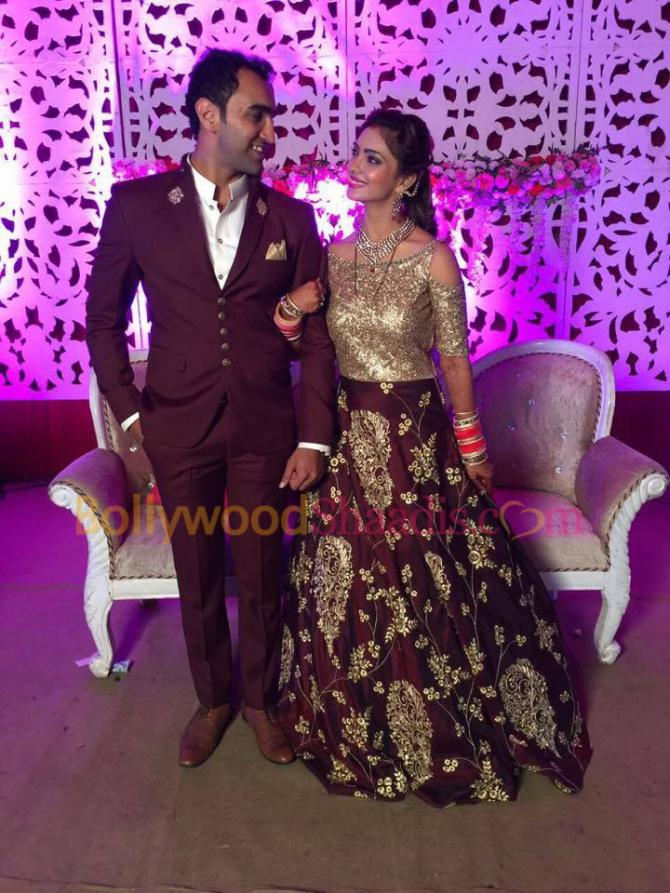 Famous television actress, Pooja Banerjee, who rose to fame through her stint in Naagarjuna tied the knot on February 28, 2017, in Delhi. The lucky guy is none other than long-time boyfriend, Sandeep Sejwal who happens to be a National level swimmer. Pooja looked ravishing in a beautiful cold shoulder gown in a maroon and golden combination by designer Turquoise by Rachit Khanna. Pooja completed her look with minimal makeup and beautiful kundan jewellery by Silveria By Ruchi.

Must See: 13 Stunning And Swagger Looks Of Bollywood Actresses At Their Sangeet Ceremony Ishqbaaz fame actress Navina Bole aka Tia from the show finally got hitched with her Mr Right in real life. Navina tied the knot with actor Karan Jeet on March 4, 2017 after getting engaged in an intimate ceremony on January 22, 2017. Navina looked stunning on her reception party as she sported a golden colour saree that had amazing work on it. Along with it, she held an elegant shimmery clutch. She completed her entire look with striking jewellery, minimal makeup and half tied hair. 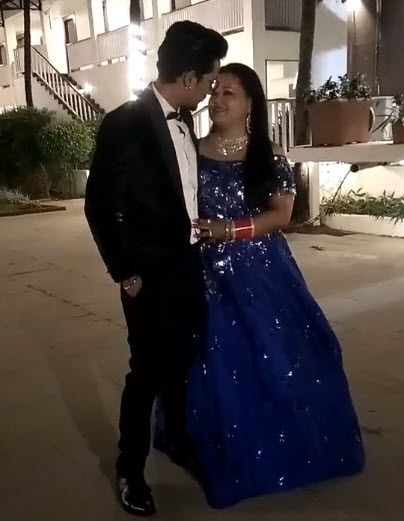 The comedy queen of Indian television and film industry, Bharti Singh decided on forever with Haarsh Limbachiya, who is a writer by profession. The couple became one legally in a grand (like literally!) wedding in Goa. After nailing her wedding look in a pink ferozi lehenga, the actress slew on her reception ceremony. She wore a dark blue Neeta Lulla gown and coupled it with a sparkling necklace and earrings, made by Anmol Jewellers. Bharti looked amazingly beautiful! Meri Aashiqui Tum Se Hi fame couple Smriti Khanna and Gautam Gupta fell for each other while working together for the show. After dating for some time, the couple took their relationship a step forward. Smriti and Gautam tied the knot on November 23, 2017, in the presence of their families and friends. On the reception, Smriti opted for the most elegant maroon coloured mermaid gown and looked like a dream in it. She did a messy bun to complete her look along with a lovely pair of earrings.

Doesn’t the reception look of these television stars inspirational! So, what are you waiting for? Whether you want to decide on a reception outfit style or decide how to carry the same wedding outfit for post-wedding big bash, then look at these actresses and take a hint from them and hog the limelight on your big day.