Celeb marriages are always the biggest affairs of B-town. One celeb marriage that garnered the most media attention was Yuvraj Singh and Hazel Keech’s wedding. Indian cricket team’s heart-throb Yuvraj and British−Mauritian model, Hazel, got engaged in a private ceremony on November 11, 2015, in Bali. They tied the nuptial knot on November 30, 2016, and since then, have been living happily together.

Recommended Read: Priyank Sharma's GF Divya Agarwal Is Upset To See The New Side Of Him On 'Bigg Boss'

It is very little that the world knows about the love story of these two, but it is certainly safe to say that they love each other unconditionally. Don’t believe us? Well, then let us give you a few glimpses of some of the most adorable moments that these lovebirds shared with each other, and decide yourself.

These pictures were posted by Yuvraj and Hazel individually on their Instagram accounts. We were most enticed us the most was the background set-up. Doesn't it look familiar? Well, yes it is! The occasion was Ganesh Chaturthi, just a few weeks before the secret engagement of Yuvraj with the Bodyguard girl.

Since Yuvraj is a follower of Sant Ram Singh Ganduan Wale, he and Hazel went to Dofera Sahib near Fatehgarh Sahib, to seek his blessings. This happened before their secret engagement in Bali. It was the first time that Hazel met Yuvraj's guru. On the same occasion, Yuvraj's father said:

"I was introduced to her by Yuvraj and she is a very nice girl. I am confident that marrying her will change his fortunes and he will return to the national squad."

You May Like: Somya Seth Becomes Mother Just After 9 Months Of Marriage, Shares Baby's 1st Pic And Name

On the auspicious day of Diwali, Yuvi decided to exchange rings with Hazel Keech on a beach in Bali. The couple looked absolutely delightful in pearl white outfits. It was a private affair with a little gathering as Yuvraj had a cricket match the next day. Their candlelit ceremony redefined romance at its best.

And, then we got to see this wild avatar that exclaims the happiness of the couple. This photograph is enough to prove how ecstatic they are to have found each other. This was the picture with which Yuvraj confirmed the news of his engagement to Hazel on Twitter, which he captioned as:

“Yes I am engaged because I found a friend for life in @hazelkeech as mom says a reflection of her.”

Don't Miss: Sneha Wagh Opens Up About How She Was Tortured By Her 2 Ex-Husbands And It Is So Shocking

Finally, when Hazel could not keep it to herself, she posted this cute picture on Instagram with her beau. The caption read:

"Yes, it’s true, I’m getting married to @groovi12 I’m so thankful to have found such an amazing person #shazam."

Well, wouldn’t it be correct to say that it brought forward a rather excited Hazel Keech in front of all?

Have you ever seen a couple this happy? Yuvraj and Hazel exuded this glow when they returned to India post their engagement in Bali. This couple was all smiles for the camera when they made their first appearance as a couple. Their comfort level can make any other couple envy them.

Suggested Read: Abhishek Bajaj Gets Engaged To His Girlfriend; Both Get Wedding Date Tattooed On Their Fingers

After the engagement, Yuvi took his beautiful bride, Hazel on a movie date. The couple attended the premiere of Neerja, starring Sonam Kapoor, in Mumbai. They were looking super-cute together. Yuvraj's close friend, Angad Bedi who is also an actor, accompanied them for the movie. 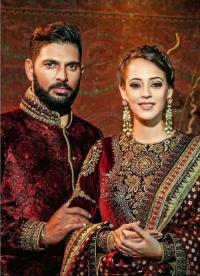 And then came the D-day! Their wedding! On November 30, 2016, they were pronounced husband and wife. And what could be more adorable than this!

So, here we’re! These were the most adorable moments of Yuvraj and Hazel’s life of togetherness! And it’s even sweeter when we look at the adorable moments before marriage, because that’s what defines the closeness and trust in a better way. Which, among these 8, was your most favourite? Do let us know in the comments section below.

Next Read: The Complete Wedding Album Of Yuvraj Singh And Hazel Keech Is Here