Yuvraj Singh gave a glimpse of how he celebrated the fourth wedding anniversary with his wife, Hazel Keech and wished her with a loved-up picture from their dinner date.

Over the years, we have witnessed the beautiful bond of love between the sportspersons and film stars. Be it Sharmila Tagore and Mansoor Ali Khan Pataudi, Lara Dutta and Mahesh Bhupathi, Geeta Basra and Harbhajan Singh, Anushka Sharma and Virat Kohli or Zaheer Khan and Sagarika Ghatge, it is always a treat for their fans to witness the union between two different worlds. Today, we will be celebrating the fourth wedding anniversary of Yuvraj Singh, who is one of the finest all-rounders of the Indian cricket team, and Hazel Keech, British−Mauritian film actress-model. (Also Read: Shilpa Shetty Twins In Black With Hubby Raj Kundra For Dinner Date, Riteish-Genelia Deshmukh Join In)

Four years ago, in 2016, the pre-wedding festivities of Yuvraj Singh and Hazel Keech had begun in late November with mehendi and sangeet. It was followed by an intimate Anand Karaj ceremony at a Gurudwara in Chandigarh and a Hindu wedding in Goa. A post-wedding sangeet and grand reception was hosted in Delhi by the newly-wedded couple. To mark their first wedding anniversary in 2017, Hazel had posted a stunning picture with Yuvraj on her IG handle and had captioned it as “Wining and dining after 1 year of marriage. Happy Anniversary @yuvisofficial it’s been a roller coaster but i wouldn’t have wanted to do it with anyone else. I love you husband.” 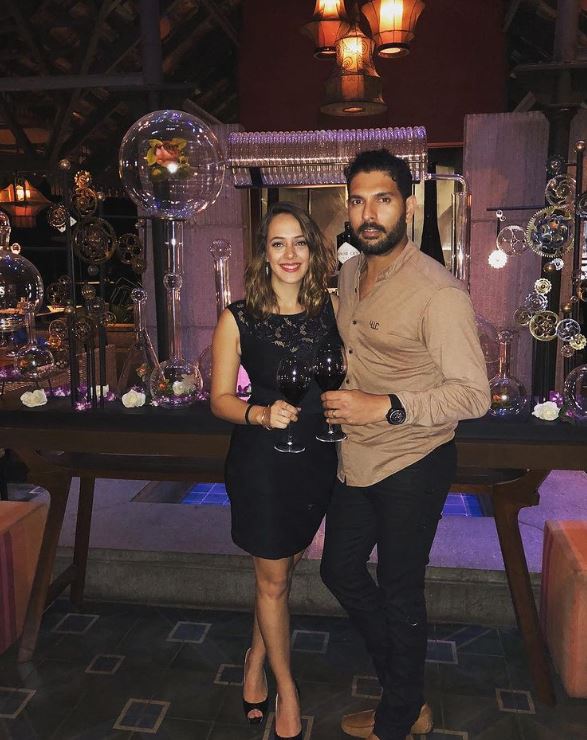 Times flies and like how! Seems like yesterday but four years have passed by since Yuvraj Singh and Hazel Keech had embarked on their journey of happily ever after. Yuvraj gave a glimpse of how he celebrated fourth wedding anniversary with Hazel at Oberoi Hotels and wished his wife with a loved-up picture of them. Yuvraj captioned the post as “About last night! Happy anniversary my love @hazelkeechofficial 4 years wow!!! Time flies .. many more to go! Thank you @oberoihotels for the lovely hospitality #sukhvilas.” For the anniversary special dinner date, Hazel stunned in a black OOTN as she twinned with Yuvraj, who picked a black jacket paired with a white shirt. 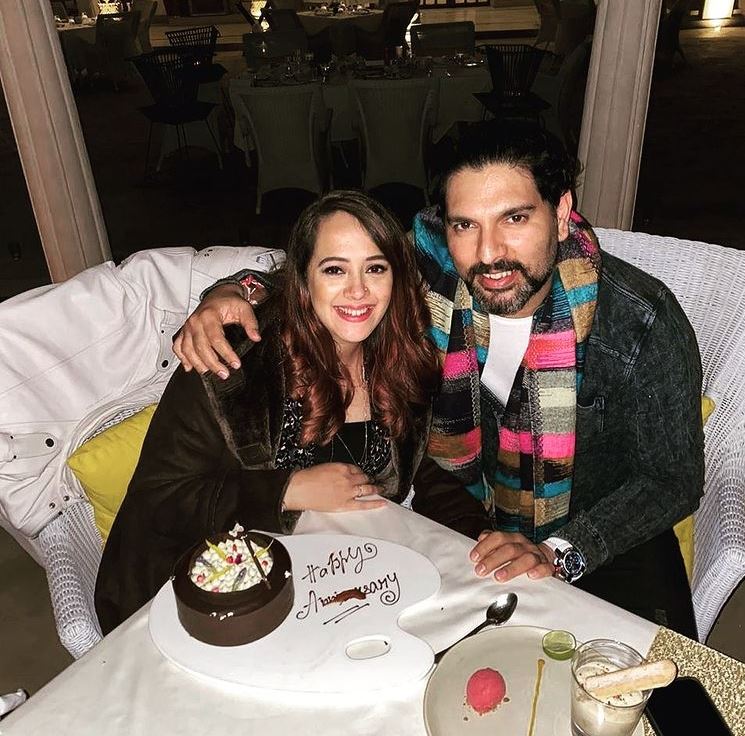 Last year, in 2019, to mark their third wedding anniversary, Hazel Keech and Yuvraj Singh had wished each other with lovely selfies. While Hazel had penned a heartfelt note for her hubby, Yuvraj had given a humorous touch to his wish for his wife. Hazel had captioned her post as "3 years later... we aren't the same people we were when we married.... but I still choose you today baby. I love you. Happy 3rd Wedding Anniversary @yuvisofficial." Yuvraj had written, "Mubarak ho biwi! We made it to 3 years; feels like 30! Happy anniversary my love @hazelkeechofficial." (Also Read: Sonu Sood Pens A Sweet Note For His Beautiful Wife, 'Sonu' On Her Birthday, Shares A Cute Picture) 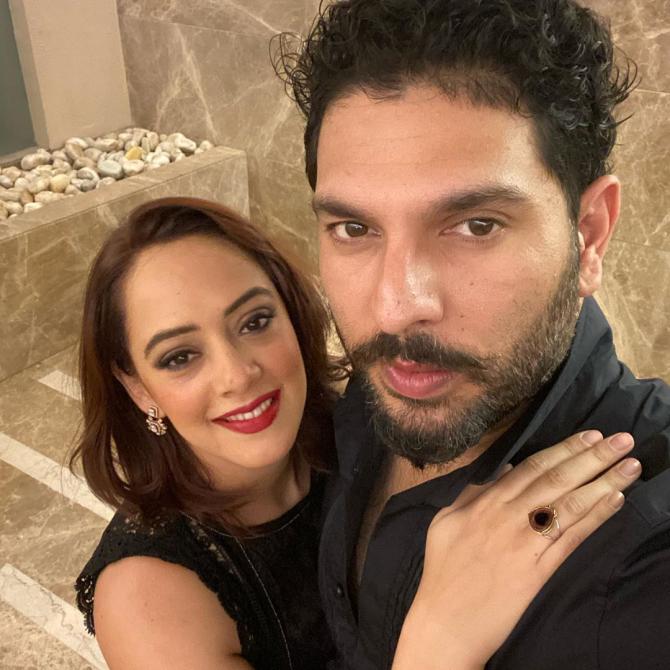 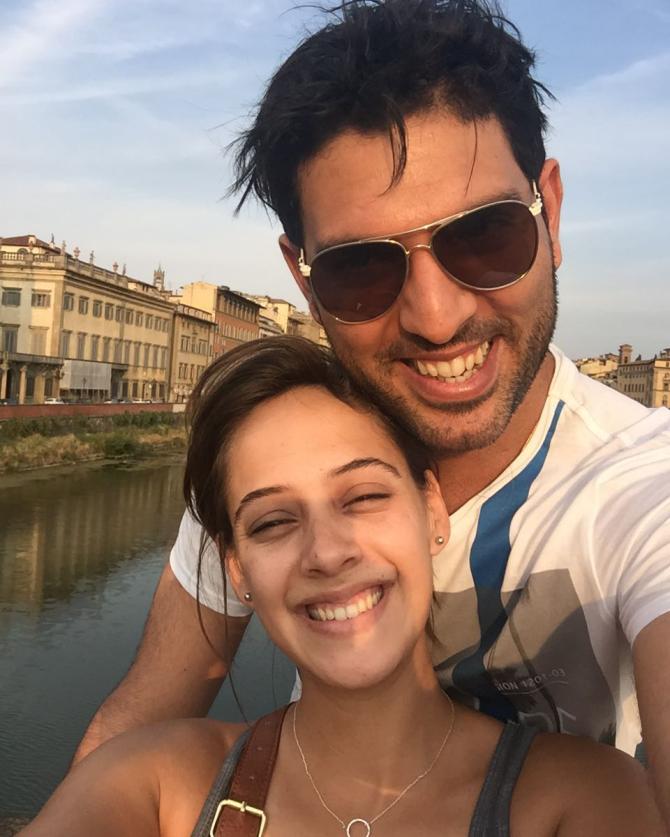 Revealing that it had taken him three years just to become friends with Hazel Keech on social media and then over a year to finally meet her in person, Yuvraj Singh had recalled his love story in an interview with a media portal. Yuvraj had remarked, "I must have asked her out for coffee seven to eight times, but she kept ignoring the topic! I have been shot down earlier but to be refused so many times was something else - she left me bewildered. I guessed she was dating someone else and decided to move on." Yuvraj chasing Hazel had taken a backseat because the same year he was diagnosed with cancer. Fate had different plans for them and three years later, he had sent her a friend request on social media. 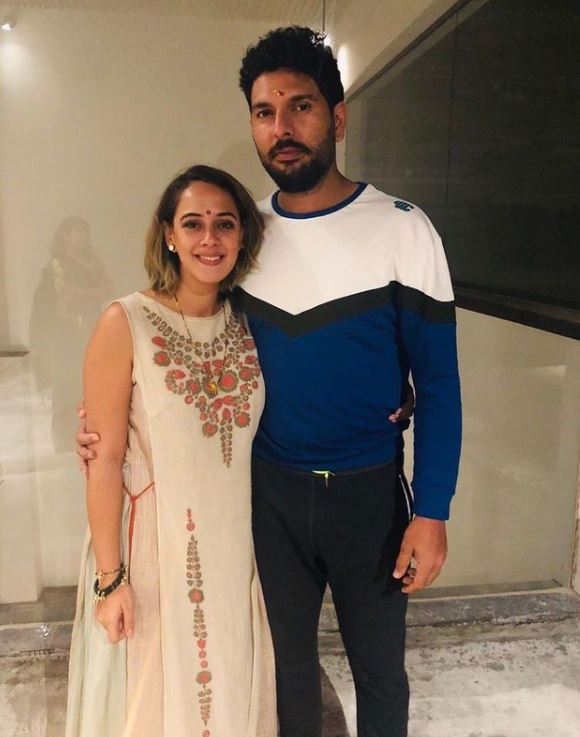 Recalling how Hazel Keech had finally agreed to go on a date with him, Yuvraj Singh had said, "In 2014, I saw her on my friend Angad Bedi's [actor] Facebook friend list. Surprised that she had become friends with him after just a brief introduction, I told Angad to stay away from her because I liked her. I then sent her a request but she accepted it only after three months. We became friends after knowing each other for three years and three months, and I told her that I had earned a date with her after all these years. This time, she agreed." (Also Read: Chhavi Mittal Wishes Hubby, Mohit Hussein On Birthday, Thanks Him For Accepting Her The Way She Is)