'Yeh Rishta Kya Kehlata Hai' actress, Shivangi Joshi brings the whole family together for a lavish celebration on the occasion of her parents 23rd wedding anniversary. In today’s fast world where some are running behind their needs, some are trying their best to achieve their dreams, some want fancy cars, while some want to travel the world. There’s no arguing the fact that we all are running behind something in our respective lives and are blindfolded by a piece of cloth on which ‘we have enough time’ is written. To understand it better, let me remind you the fact that whenever we talk about catching dreams or working hard in our jobs, we hear people saying life is short and you’re not getting another chance to achieve your dreams. However, when it comes down to giving time to your family, loved ones, and friends, we put another piece of cloth and blindfolded us with the lie that ‘we have enough time’. No wonder, it’s the harsh and inevitable reality about our lives that we don’t feel ashamed or bad when we cut down our family time and present it to our office work. (Recommended Read: Twinkle Khanna Reveals Her Son, Aarav Has Saved Her Number As 'Police' On His Phone)

Well, it doesn't mean we all should just quit our jobs. Not many people know that it’s way easier to balance both the things in comparison to the pain that you feel (sometimes) when you couldn’t be with your family and friends on important occasions. All you need to do is put some boundaries in both your personal and professional life and never cross any one of them. However, if you need some inspiration then please have a look at this famous television actress from the show, Yeh Rishta Kya Kehlata Hai, Shivangi Joshi. The popular television actress recently arranged a lavish party on the occasion of her beloved parents' 23rd wedding anniversary.

Shivangi surprised her mom and dad with a heart-melting surprise as she took them out with the idea of going out for dinner. But instead, she had organised a party for them, no wonder it was an extremely warm gesture by Shivangi and she deserves respect from us and love from her parents. To light up the night, Shivangi’s Yeh Rishta Kya Kehlata Hai co-stars, Tanmay Shah, Shilpa Raizada, and many others were there to surprise the classic couple. Have a look at the pictures: (Also Read: Ajay Devgn Trolls Kapil Sharma For Making Money On The Name Of His Newborn Daughter, Anayra Sharma)

There’s no argument to the fact that Shivangi is extremely close to her family and love spending time with them. However, the actress is also doing outrageous in the professional front and is the reason why her parents are extremely proud of their daughter. Last year in an interview with Pinkvilla, Shivangi’s mother, Yashoda Joshi had revealed her emotions on her daughter’s success. She had said, “I am not saying this because she is my daughter, but Shivangi works hard. Even when she is unwell and I tell her to take an off, she doesn't. No one can raise even a finger at her.”

However, Shivangi had also revealed time and time again in multiple interviews, how her parents had supported her at the beginning of her acting career and are the two pillars of her success. In a conversation with India-Forums, she had revealed, “If mom wouldn't have been here, I wouldn't have been here either. For me, she left my two young brothers (who were younger back when we left) with my father, and I think my father and my mother have sacrificed equally as much. It is difficult for my father to bring up two kids there, and here, it is equally difficult for my mother to keep up with me (laughs). Hats off to my parents, and I love them, had it not been for them, I wouldn't have been here, and of course, my fans as well.” (Don't Miss: Richa Chadha Reveals Details About Her Wedding With Beau, Ali Fazal, Says, They Are In A Happy Space) 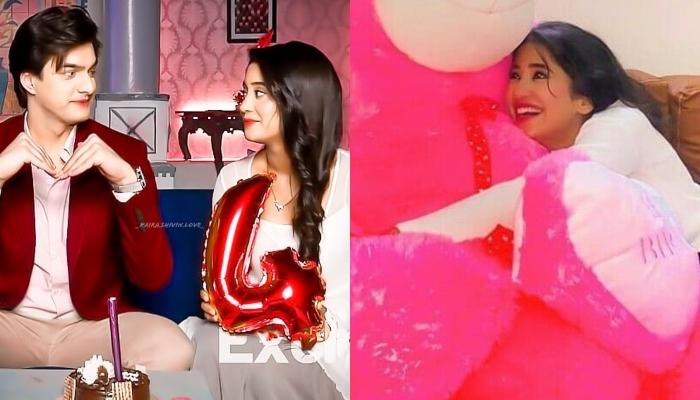 We are in the midst of a global pandemic. The countries are at war with a highly contagious virus that has killed over 3 lakh people. In these strange times with 'stay at home' orders', celebrating birthday seems an odd option. But it is a must as we need to stay positive