Neetu Kapoor Shares A Rare Photo Of Kids, Ranbir And Riddhima With A Crucial Advice For Both Of Them

On World Siblings Day, Neetu Kapoor shared a rare picture of her daughter, Riddhima Kapoor Sahni and son, Ranbir Kapoor, with an important message for both of them. See inside!

The entire globe is celebrating World Siblings Day, and the entertainment industry is also celebrating the day by sharing some rare pictures with their siblings from their memory lane, and their fans are just loving it. Joining the queue of celebrities is veteran actress, Neetu Kapoor, who shared an unseen picture of her children, Riddhima Kapoor Sahni and Ranbir Kapoor, on the special occasion, along with an important piece of advice for both of them. The whole internet is in awe of the beautiful picture and this celeb siblings duo because of its emotional aspect.

Talking about Ranbir Kapoor and Riddhima Kapoor Sahni's surreal bond, then, in a throwback interview of the doting sister with the Vogue magazine, she had revealed a fun anecdote from her growing up days. The star sister had said that Ranbir has always been quite open about his personal life with her since childhood. She had said, "One of the funniest things he would do when I was studying in London, was to raid my cupboard for potential gifts he could give his 'crushes'." Riddhima had further added, "Sometimes, when I was back home, one of them would end up visiting us wearing one of my belongings, and I would be like, 'That's mine, right?' making sure I pulled him up." 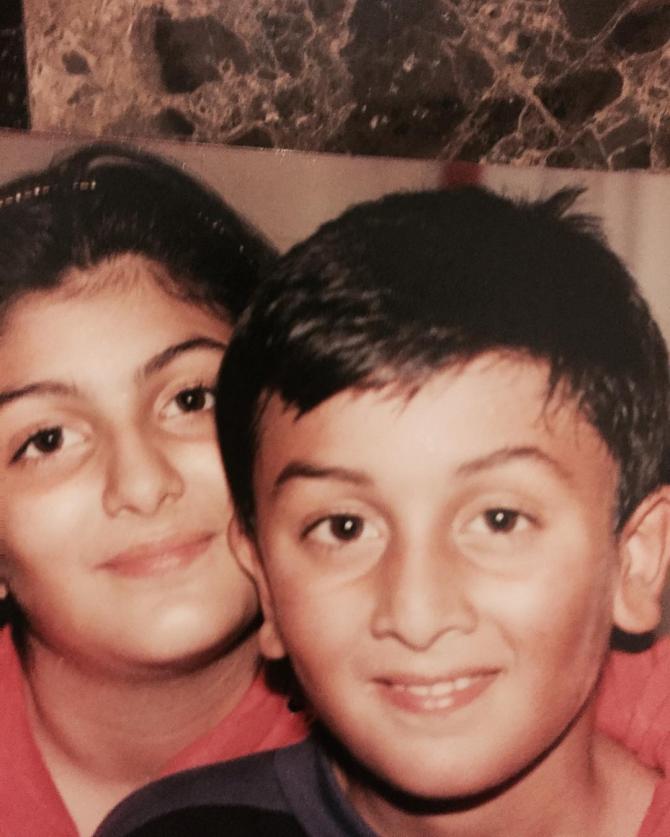 On April 10, 202, veteran actress, Neetu Kapoor took to her Instagram stories and shared a never-seen-before picture of her daughter, Riddhima Kapoor Sahni and son, Ranbir Kapoor, from their late father, Rishi Kapoor's one of the prayer meets. In the picture, the brother-sister duo can be seen twinning in black and giving us some major siblings goals with their stunning looks in their respective outfits. While on one side, Riddhima looked gorgeous as ever in her off-shoulder top and black denim. On the other side, Ranbir proved his style quotient's mettle with his full-sleeved shirt and grey-coloured denim. However, it's impossible not to get emotional after seeing Rishi ji's monochrome picture with flowers right in the centre, behind them. The doting mother, Neetu ji, also gave an important piece of advice to her children in her small note, which she penned atop the photo, and it can be read as "Brothers and sisters are the best gift from your parents. Respect and love each other always #worldsiblingday." 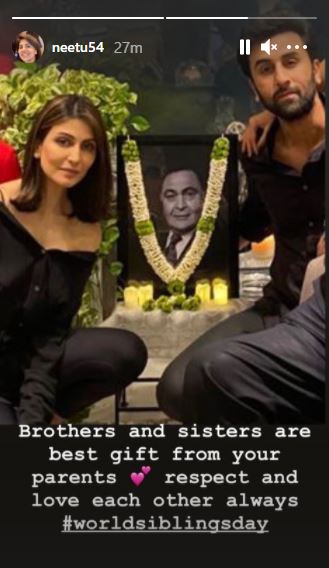 After some hours, Riddhima Kapoor Sahni also took to her IG stories and shared a stunning selfie with her brother, Ranbir Kapoor, from her 40th birthday last year on September 14, 2020. In the picture, the birthday girl looked ravishing as her stunning necklace is simply jaw-dropping and overshadows everything and everyone. Talking about her superstar brother, Ranbir, he had looked dapper in his light blue denim look and had leaned his head towards his sister. Atop the beautiful picture, Riddhima wrote, "#worldsiblingday" followed by a pink-coloured emoticon. Take a look: 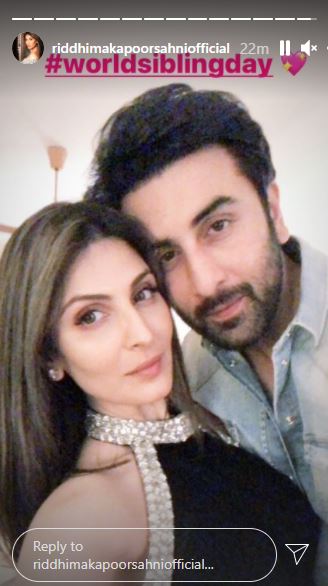 For the unversed, Riddhima Kapoor Sahni's birthday last year was a star-studded affair as the entire Kapoor clan had gathered together to celebrate her birthday. The star daughter and ace designer had taken to her Instagram handle and had shared a collage of the family night that had gone viral on social media at that time. In the cutesy collage, we could see a picture of Riddhima posing with Ranbir Kapoor, and in another picture, she was all smiling with her cousins, Kareena Kapoor Khan and Karisma Kapoor. Alia Bhatt was also present at Riddhima's birthday celebrations, and again their great bonding had won everyone's hearts. Did you like Ranbir and Riddhima's picture shared by their mother, Neetu ji? Let us know!