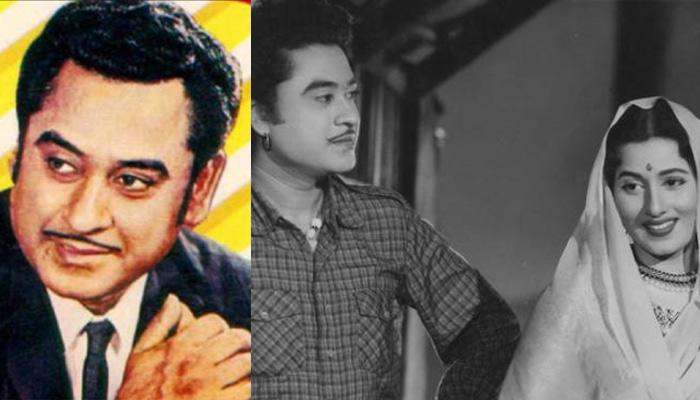 Many consider him as their God and many as a legend, who was gifted with a voice like no other. The above lines, sung by Kishore Kumar garnered him a thundering applause and also remained a harsh reminder of his aloofness behind the illustrious life he led.

Born as Abhas Kumar Ganguly, Kishore’s magical voice and a multitude of talent bugs that resided inside him, made him one of the most famous singer-actors till now. While Kishore was always under the limelight, but what lay hidden inside him, were layers of loneliness and discontentment. The singer-actor not only got involved, but also got married to four different women of his times, who were also the well-knowns of the industry. Let’s take a look at his married life and four wives.

Kishore Kumar first tied the knot with Satyajit Ray’s niece, Ruma Guha Thakurta, in 1950. Apart from being an ace actress and singer, Ruma also worked as an active socialist. She was the founder of Calcutta Youth Choir in 1958. The couple tied the knot in a grand ceremony in Bombay in 1950 and were blessed with a son, Amit Kumar in 1952. Cracks started developing between the couple soon after marriage as it was reported that Kishore Kumar wanted Ruma to be at home and take care of the house and their son, while she did not want to let go of the stardom she had achieved and not utilise her potential. After many years of friction and quarrels, the couple amicably decided to part ways in 1958, 8 years after their marriage. Ruma was last seen in Hollywood film, The Namesake in 2006. In an interview with Pritish Nady, Kishore Kumar had said:

“She was a very talented person but we could not get along because we looked at life differently. She wanted to build a choir and a career. I wanted someone to build me a home. How can the two reconcile? You see, I'm a simple minded villager type. I don't understand this business about women making careers. Wives should first learn how to make a home. And how can you fit the two together? A career and a home are quite separate things. That's why we went our separate ways.”

While the west flaunted their Marlyn Monroe, India had its own Madhubala. Ever since she entered the industry, Madhubala emerged as an instant sensation, a diva, a trend setter. Born in a poor Pathan family, Madhubala decided to tie the knot with Kishore Kumar after her relationship with Dilip Kumar faded. Their marriage sent the entire nation into a fizzy as Kishore Kumar reportedly had to change his religion and convert into a Muslim (he was named Karim Abdul for the same) to appease Madhubala’s parents who vehemently opposed this alliance. Even after a civil Hindu wedding, Madhubala was not accepted by Kishore Kumar’s family. Before their marriage, Madhubala had been detected with a hole in her heart. Right when Madhubala was preparing to leave for her treatment to London, Kishore had proposed to her in a true filmy style. Though they lived harmoniously for a while during their short-lived married life, both went into bouts of depressions during the last few years of their marriage. The reason being, Madhubala was mostly left bed-ridden and Kishore had left her as she mostly started keeping unwell. In an interview, Kishore had shared:

“She was quite another matter. I knew she was very sick even before I married her. But a promise is a promise. So I kept my word and brought her home as my wife, even though I knew she was dying from a congenital heart problem. For 9 long years I nursed her. I watched her die before my own eyes. You can never understand what this means until you live through this yourself. She was such a beautiful woman and she died so painfully. She would rave and rant and scream in frustration. How can such an active person spend 9 long years bed-ridden? And I had to humour her all the time. That's what the doctor asked me to. That's what I did till her very last breath. I would laugh with her. I would cry with her.”

After battling the disease for a long time, Madhubala passed away in 1969.

Checkout: Feroz Khan Married A Single Mother, Left Her And Children For An Air Hostess But Never Married Her

Many years after Madhubala passed away, Kishore Kumar found love in the arms of Shammi Kapoor’s first wife, Yogeeta Bali. It was said that while being married to Kishore Kumar, Yogeeta had fallen for Mithun Chakraborty during the shooting of their film, Khwaab. The animosity between Kishore Kumar and Mithun grew to such an extent that Kishore Kumar refused to sing songs for Mithun, which proved a boon for Bappi Lahiri who gained a huge fame and following soon. Yogeeta and Kishore Kumar separated just after two years of being married. In an interview, Kumar had shared that their marriage was like a joke:

“That was a joke. I don't think she was serious about marriage. She was only obsessed with her mother. She never wanted to live here.”

One of the most sought after actresses, Leena decided to go for an arranged marriage at a very young age with Sidharth Bandodkar (Chief Minister of Goa). However, tragedy soon struck her and Leena was widowed at just 25. Remembering her first interaction with Kishore Kumar, Leena had once said in an interview:

“One day, his driver Abdul came home, gave me his number and asked me to call him. When I called him, he at once picked up the phone and said, ‘Leena! I’ve been waiting to hear from you’. Every morning he’d call me and without introducing himself start talking. He’d make me laugh. My father began noticing a change in me. I didn’t fall in love with him instantly but I felt protected when I was with him. He was kind to his staff. I’d wonder why he was called kanjoos. There was no chichorapan (frivolousness) about him. He didn’t drink. But yes, he didn’t like his women working. I liked the child in him who rejoiced in the rain, who felt excited about nature. His world was a world of dreams. Once he went to a bazaar in Delhi. There he saw masoor ki dal. Immediately he said, ‘Let’s go to Musoorie!’ I loved this gypsy life. I was in need of such a life.”

Do Read: Aditya Pancholi And Zarina Wahab's Marriage Story: Forgave Him Twice After His Extra-Marital Affairs

She had further shared:

“Kishoreji never ever told me ‘I love you’. He said it’s something to be felt, not said. Even in his films he was never overtly romantic. But as I began loving him, I grew insecure. At concerts, girls would kiss him and leave lipstick marks on him. He used to call me his lagaam.”

“On the morning of October 13 (the day he passed away in 1987), he looked pale and as though in deep sleep. I went near him when he woke up and asked, ‘Did you get scared? Today is my holiday’. His eyes were wide open and he was breathing out. I thought he was fooling as was his nature. But that was the end.”

Kishore Kumar’s early demise shocked the whole town. While his unsurpassed creative brilliance gave him unbeatable stardom, it was his tumultuous married life, which restrained him to the bitter reality of the being. But no matter what, Kishore Kumar is a legend. His immortal remains in the form of priceless songs that he has left behind for us, will stay forever in the generations to come.