A picture of Katrina Kaif and Vicky Kaushal standing outside their mutual friend’s Diwali bash together, in their traditional best, has sparked off their relationship rumours. Who doesn’t have the hots for the heartthrob, Vicky Kaushal? This tall, dark and handsome dude has become the nation’s crush with his breakthrough performances and charming looks. But more than his professional life, Vicky’s personal life has been a piece of news all over and looks like he is trapped in the vicious cycle of ‘fame, money and linkup’. Vicky was in a steady relationship with Harleen Sethi, but post his breakup with her, he has been linked with many A-listed B-town divas. (Also Read: Kareena Kapoor Khan Gives A Sneak Peek Into Her Lavish House Through BTS Videos Of Diwali)

Speaking of Vicky Kaushal’s linkup rumours, Katrina Kaif, Huma Qureshi and Bhumi Pednekar get a prominent mention. When Vicky had broken up with his now-estranged girlfriend-cum-television actor, Harleen Sethi, the reason was contemplated to be his growing fondness towards Katrina. But later, reports had suggested that it wasn’t Katrina, but Bhumi, the apparent reason for Vicky’s breakup with Harleen. Though the reasons were best known to Vicky and Harleen, the speculations of him dating Katrina doesn’t seem to fade away.

With the nation still sinking in the Diwali fever and the social media is popping up pictures and videos from the grandest B-town celebratory bashes, the latest one has made us say, ‘Humko Deewana Kar Gaye’! The picture has Katrina Kaif and Vicky Kaushal standing outside their mutual friend’s Diwali bash together, in their traditional best. As per The Times of India, Vicky and Katrina had left the bash together but went separately in their cars. While Katrina made a statement in a Sabyasachi red-coloured lehenga, Vicky looked dapper in a white-coloured kurta-pyjama.

Katrina Kaif had launched her own cosmetic line, Kay By Katrina, showcasing a whole new range of Kay products. Kay Beauty had also launched an ad film with the message #ItsKayToBeYou, which is written by Zoya Akhtar. To support the same, her rumoured beau, Vicky Kaushal had posted the promo on his Instagram handle and congratulating Katrina for her new venture, had written, “Congratulations @katrinakaif and all the very best for @kaybykatrina... Shine On! #ItsKayToBeYou.”

In an interview with Pinkvilla sometime back, Vicky Kaushal had revealed his parents’ hilarious reaction to his dating rumours. Recalling an incident, Vicky had shared that one morning his parents were sitting at the table, waiting for him to pick up the newspaper, which had his link-up story. When he read the piece and turned to his parents, they started laughing and said, “Jis pace pe ja raha hai, humein toh bataa de.” Opening up about his linkup rumours with Katrina Kaif, the Vicky had stated, “Rumours about me and Katrina Kaif have been going on for months, and soon it will be some other beautiful lady." (Also Read: Kareena Kapoor Khan And Taimur Ali Khan Twin In Boots, Setting The Mother-Son Style Quotient High)

Do you remember when Katrina Kaif had revealed on Koffee With Karan that she wanted to work with Vicky Kaushal, as she felt the two would look good together? Karan Johar had told Vicky the same when he came on the show and the Masaan actor pretended to faint in disbelief. Later, in an interview with the Mumbai Mirror, Vicky had reacted, "I was surprised that she knows about my existence." Guess, she really did!

During an award show, when Vicky Kaushal and Katrina Kaif were together on-stage, the former had ensured to make good use of the opportunity and had asked the latter, "Why don't you find a nice boy like Vicky Kaushal and get married to him?" He had further explained, "The season of weddings is on, so I thought, you too would want to do the same and so I thought I ought to ask you." Katrina, who had pretended that she didn't get his point, had asked him, "What?" To which, Vicky had probed, "Mujhse Shaadi Karogi?" with the song playing in the background. Katrina couldn't help but had blushingly replied, "Himmat nahi hai (I don't have the courage)." And Salman Khan, Katrina’s rumoured ex who was also present at the award show, had a priceless reaction to this stint of Vicky and Katrina.

In a 2018 interview with The Times of India, speaking of love Vicky Kaushal had stated, “Love hasn’t changed and it never will, no matter what kind of a society we become. You will still feel the butterflies in your stomach when you meet that special person for the first time, when you feel differently for that one person in the room, when you can’t take your eyes and thoughts off him/her. It doesn’t matter how new or old school you are. However, with time and exposure, the social fabric changes. So, while love remains the same, our approach towards it changes.” (Also Read: Amitabh Bachchan Took Us On A Memory Lane By Sharing Some Unseen Pictures From Diwali Celebrations) 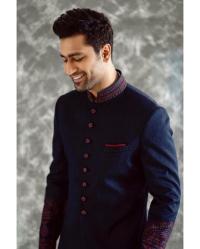 With Vicky and Katrina leaving their friend’s Diwali bash together, the sparks flew off in the gossip mills!

The glamour world might look all glistening from the outside, but from inside it is filled with rumours, speculations and whatnot. When a person chooses to enter the entertainment world, they know that their life will always be in the media glare. While some react to it sportingly, others might